Late on Saturday night, the UN Climate talks ended in Poland with a negotiated deal for how Paris signatories can put the 2015 landmark agreement into action — a ‘rulebook’ of sorts, for the Paris goals.

While this was a cause for celebration for some, several critics believe the deal left a list of contentious and urgent issues still to be resolved — and that its stipulations are not ambitious enough to prevent the dangerous effects of climate change.

A key criticism of the ‘rulebook’ — agreed to by nearly 200 countries at the Summit — is that the framework does little in terms of increasing governments’ commitments to cut emissions, with scientists stating that the world remains on track for 3C of warming and with it, catastrophic extreme weather.

The Paris Agreement aims to limit a rise in average world temperatures to below 2 degrees Celsius above pre-industrial levels.

Still, some were feeling optimistic about Sunday’s achievement, including Alden Meyer of the Union of Concerned Scientists who said: “While some rule book elements still need to be fleshed out, it is a foundation for strengthening the Paris Agreement and could help facilitate US re-entry into the Paris Agreement by a future presidential administration”.

But a throng of critics are very concerned, including executive director of the 350.org climate change campaign group, May Boeve.

Boeve said: “Hope now rests on the shoulders of the many people who are rising to take action: the inspiring children who started an unprecedented wave of strikes in schools to support a fossil-free future; the 1,000-plus institutions that committed to pull their money out of coal, oil, and gas, and the many communities worldwide who keep resisting fossil fuel development.”

Hope is needed, as Australia, like the rest of the world, currently face a flurry of extreme weather events front on.

This last week or so in Australia has brought with it some pretty whacky weather, to put it bluntly.

A quick snapshot of headlines from the country in the last week include the likes of ‘Victoria's freak floods prompt 1,400 calls for help’; 'Exceptional' rain from ex-Cyclone Owen dumps 681mm in north Qld in a day’.

As well as floods in QLD, news outlets reported ‘45C in November 'Extraordinary': Queensland heatwave smashes records’. And the all round craziness of the weather brought headlines like ‘Cyclone, humidity and a scorching Test all part of an 'extreme weather week' and an article from this morning, ‘Intense heatwaves and heavy downpours: The worrying weather ahead for Australia’.

Melbourne delivered some sensational flash flooding photos including this one: 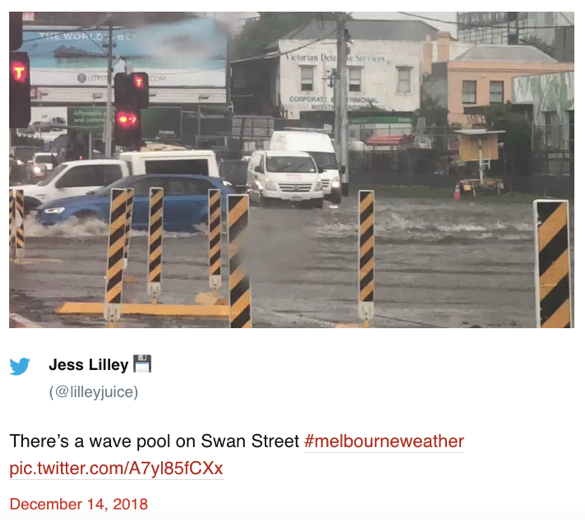 And this amusing one — of a Porsche driver stuck in flash flooding under the Dudley St underpass — which became Twitter-famous: 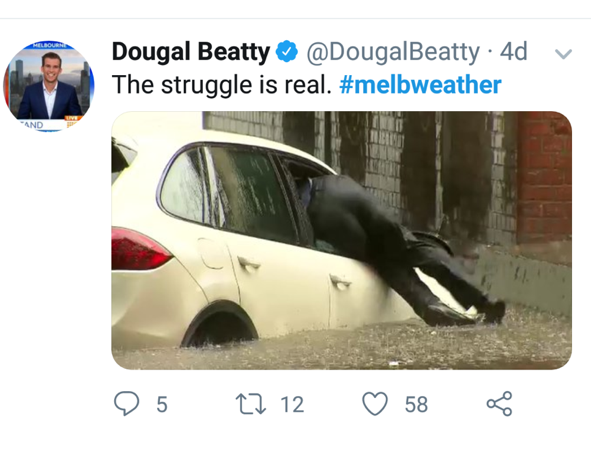 In other green energy news from the last week, one of the world's leading development banks — the European Bank for Reconstruction and Development — has voted to adopt a "no coal, no caveats" financing policy which will see it cut lending to oil exploration and production projects.

The move is likely to have the effect of bringing to light other development banks across the world which are still financing fossil fuel projects in large and alarming numbers, against the dire warnings of the global scientific community, and the recommendations of the Paris Agreement and the UN Intergovernmental Panel on Climate Change (IPCC).

With a multitude of global factors, and some nasty looking forecasts, there are companies leading the way towards decarbonisation. Here’s a brief snapshot of one of the only ASX small caps to venture into the world of hydrogen.

Over eight years was invested into developing what is now the ‘HAZER® Process’. Andrew Cornejo earned a PhD at the University of WA looking at improved ways to produce hydrogen. Now he’s the CTO and second-biggest shareholder of HZR.

OK, a bit of context to grasp what this green energy play is actually doing.

The “cracking” of natural gas (methane) into hydrogen and carbon dioxide produces about 95% of the world’s hydrogen, but the process also produces dirty greenhouse gases. Alternatively, electrolysis uses electricity to split water into hydrogen and oxygen, but consumes a lot of energy and so also comes with the same greenhouse problem. That is, unless renewable energy is used in the electrolysis to do the splitting.

HZR’s solution involves splitting methane into hydrogen and graphite, resulting in a material that’s in demand for lithium batteries, as opposed to the by-product of carbon dioxide. Intriguingly, the process uses iron ore as a catalyst.

Last year, the small cap’s biggest shareholder, Mineral Resources, agreed to fund the development of a large-scale plant in WA to produce ultra-high-purity graphite, in exchange for HZR’s technology.

HZR already has an existing pilot plant in Sydney with a production capacity of almost 30kg of graphite per day. This plant that will be relocated to MinRes’ Perth WA site.

The plan is for Hazer’s fluid bed reactor (FBR) plant to be situated next to MinRes’ paddle tube reactor (PTR) pilot plant, providing the two companies with operational synergies including cost sharing.

With its fast-paced developments, and plenty of talk around about the increasing importance of hydrogen (which Green Keeper covered here and here) in a low emissions future, it’s no wonder HZR’s share price is up ~20% in the last six months.

As we’ve come to expect, these exciting and fascinating low emissions developments in the business world are totally outpacing any climate-related initiatives being undertaken by government — who seem to be taking this kind of approach about the whole 'impending climate catastrophe' hotchpotch...

The question is whether the combined effect of these efforts can help stem climate change fast enough to avoid the catastrophic 3 degrees of warming that scientists are desperately warning us about.