Minister for Resources, Matt Canavan came out at the end of last week saying that Australia can continue to build new coal plants as the Paris Climate Agreement commitments were ‘non-binding’, referring to it as a three-page document that allows for flexibility. He added that rather than focusing on the situation in 2030, “what I want to focus on is solving the crisis we have in energy today”.

Funny, that sounds exactly like the kind of short-sighted rhetoric from 10, 20 or 30 years ago that got us into the dire anthropomorphic CO2 mess we are now in. Meanwhile, new PM Scott Morrison’s proactive approach to the drought facing 100% of NSW is to ask that people ‘pray for rain’.

I don’t think this plan has particularly impressed the many farmers calling for immediate action on climate change, as drought and other extreme weather issues continue to threaten their livelihoods. One such farmer directed the following at politicians via The Guardian yesterday: “Get your heads out of the coalpit and back into the real world. We need meaningful action now”.

While the political kerfuffle around climate policy drags on, certain groups in Australia are now looking to ‘go it alone’ in the fight against climate change, particularly after the Liberal party’s foiled National Energy Guarantee — which was so divisive it prompted the beginning of the end of Turnbull’s prime ministership.

Just days after the leadership spill, representatives from at least 20 industry organisations, environmental and social welfare groups, and academics held a meeting (in person and via conference call) convened by the Australian Industry Group. The meeting was intended to discuss how to move forward without the help of any meaningful government policy on the issue.

This question is hugely important for companies, particularly small caps, operating in the green energy space.

Promisingly, state Labour governments in Queensland, Victoria and the ACT have already committed to go it alone and pursue their respective ambitious renewable energy targets.

Perhaps they can follow in the footsteps of California. Former Governor (and well-known Republican) Arnold Schwarzenegger famously signed a landmark bill in 2006 aimed at reducing economy-wide emissions from multiple sources — at the same time, George W was taking little or no action on climate change. The law required companies to have cleaner cars, energy-efficient buildings and alternative fuels.

Nowadays, California is well and truly leading the way. Earlier this month the State Legislature approved a bill mandating that by 2045 all of the state’s electricity will come from renewable and zero carbon sources like wind, solar, hydropower and nuclear. It involves a 60% renewables target by 2030.

Not long after, the Global Climate Action Summit happened in San Francisco, co-hosted by California’s Governor and the former New York Mayor, Michael Bloomberg (the eighth richest person in the US just quietly!). Of course, Bloomberg is also the founder, CEO and owner of global financial services giant, Bloomberg LP.

The point is — whether the US government or the Australian government are committed to taking action could become less relevant as we see companies, industry bodies and everyday people step up and decide to act.

On that note, this week I take a look at one busy little bee of a stock (that’s right, see below...) operating in the green energy space. Apparently running the colour spectrum, this dual-listed NZ company is not only green, it’s also an alarming shade of yellow — and it’s giving renewables a red hot go?

Mercury rising for MCY shares — not the planet

The $4.2 billion dual-listed energy play, Mercury NZ Limited (ASX:MCY | NZX:MCY), generates 100% of its power from renewable sources — hydro and geothermal — which is pretty impressive. It sells its electricity through several retail brands like GLOBUG, Tiny Mighty and Bosco.

Not only has the green power play re-branded to look extra young and colourful, it also has an experienced Chair at the helm in Joan Withers, former CEO of Fairfax New Zealand.

Over the past five years the company’s share price is up some ~70%: 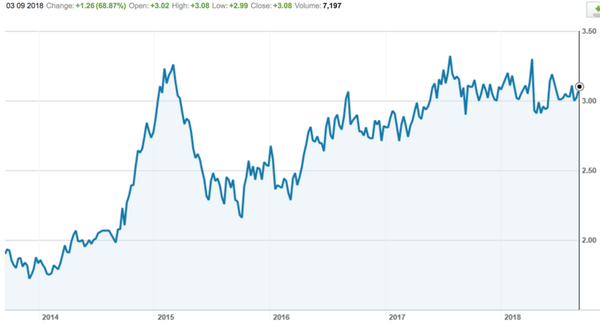 What’s winning MCY some lime-green-light lately is its surprise takeover of Tilt Renewables (ASX:TLT), a growing Australian and NZ wind power producer, in a joint move with Infratil.

Both MCY and Infratil (ASX:IFT) have been major shareholders of TLT (since listing on the ASX in February at $2.00, TLT’s share price dipped to a low of ~$1.70 but is now up 22% over the last six months) and between them own ~71% of the company. Now they’re teaming up to offer NZ$208.5 million to pick up the remaining shares.

Mid-last week, the JV announced the Offer was now fully unconditional (scheduled to close on 15 October).