Is Australia’s own ‘Lithium Valley’ under threat?

There’s never a dull week when it comes to the strangely controversial topic of climate change and green energy in Australia.

I say strange because we still have members of Parliament (Prime Ministers even) looking at climate change and wondering if “the jury’s still out on science”. This is happening while other countries — particularly European and Scandinavian countries, but also China and a few in South America — seem to have long forgotten the topic was ever up for debate and are leading the way in terms of real change on a national level.

The below image from Eurostat (2016) gives an indication of who are the leaders in terms of the percentage of energy sourced from renewables: 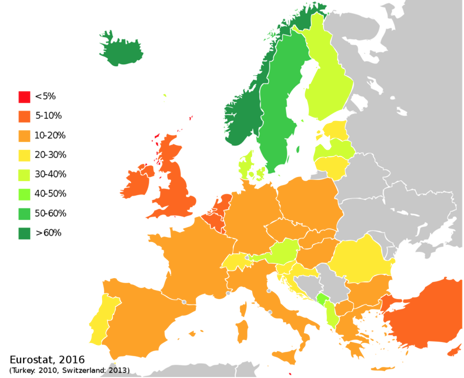 Meanwhile, PM Scott Morrison’s response to disturbing fresh results showing carbon dioxide emissions have actually risen in Australia by a scary 1.3 per cent in the year to March was blasé at best. His response to an official government projection showing the nation is on track to fall short of its Paris 2030 emissions commitment by 868-934 million tonnes, was more or less ‘Nah, we won’t’.

He went on to state that the data was ‘cherry-picked’ to highlight the negatives.

Yet an aggregate rise in emissions is just that and is fundamentally what the Paris agreement and all its signatories are concerned with.

Morrison may point to other stats that appear to show progress (like per capita emissions), but at the end of the day, any stats other than the aggregate rate of emissions are irrelevant when it comes to managing the threats of climate change.

The Golden State steps up yet again

In California — which has become a hot spot for technological efforts to cool the planet — the concept of green machines continues to spread across yet more industries.

XL Lifts and SSA Marine this week launched electric forklifts, specifically the ‘Wiggins Yard eBull’, at the ongoing Breakbulk Americas Conference in Houston, Texas. The forklift uses fast-charging lithium-ion battery tech from Thor Trucks — who recently won an impressive gig with US package deliverer UPS to provide batteries for a quota of their electric delivery trucks.

US-based Thor Trucks is getting itself some attention lately, however being a privately held company, Australian investors can’t access it. And, unfortunately, in terms of similar homegrown companies, it’s looking difficult to get in on the electric truck action via the ASX at all.

Tesla has already brought out electric truck prototypes and, globally, the market has shown plenty of interest in the idea. Last month IKEA announced it was committing to making a quarter of its home deliveries using electric trucks and vehicles (EVs) within two years, with the plan to increase that to 100% of deliveries by 2025 (the decision to commit to such a lofty goal was in part due to the campaigning work of The Climate Group, a NFP trying to get businesses and cities to commit to EVs across the US).

Things are looking un-friendly for some green-themed ASX small caps thanks to the government’s flagged changes to the research and development (R&D) laws. The Federal Government plans to impose a $4 million cap on R&D tax incentives for small companies with aggregated annual turnover of under $20 million.

Small cap wave power company Carnegie Clean Energy (ASX:CCE) is one company feeling the pinch already. It has been working towards the creation of a government-backed wave farm in Albany but this week is advising shareholders that the Albany project could be in trouble as the company reviews its ability to fund it.

Another company that’s come out swinging regarding the government’s R&D changes is Lithium Australia (ASX:LIT). LIT advised the market last week it’s been forced to quickly revise its plans for its lithium extraction pilot plants, looking to potentially move the plants overseas. This is in direct response to the R&D tax changes, with those changes expected to come at quite a cost to the small cap which is developing cutting-edge technology.

LIT’s CEO Adrian Griffin, along with others, have argued that the changes will hinder the development of a ‘Lithium Valley’ in WA, backed by the state government body ‘Regional Development Australia’.

If government policy steers away from green initiatives or dis-incentivises entrepreneurship, investment and development that’s needed to build a competitive green energy future in Australia, then investors are likely to miss out on planet saving investment opportunities.