Australia is currently experiencing its third day of a record-breaking heat wave. Yesterday, SA’s Port Augusta maxed out with a top temperature of 48.9C, the highest ever recorded in the South Australian town. Further north in Tarcoola, more records were broken as the mercury hit an astonishing 49C.

South Australia has declared a ‘code red’ for the state, with concerns for the health of homeless people, the elderly and those with medical conditions, all of whom are put significantly at risk by soaring temperatures.

In NSW last week, the mass die-off of fish in the Darling River (in Menindee near Broken Hill close to the SA border) commanded national attention.

Up to one million fish were found dead in the river, with federal water minister David Littleproud blaming the die-off on drought. Contention abounds, however, with some people blaming the local cotton industry’s heavy requirements for water, and others blaming climate change in general.

Essentially, there just isn’t enough water to go around, with NSW in 100% drought. Heatwaves and general high temperatures will exacerbate the issue of low water levels, while we know higher than usual temperatures are a key consequence of rising greenhouse gases and climate change.

As far as what specifically killed the fish, it is believed that rapid shifts in water temperature killed much of the algae in the river system; when algae die, they siphon oxygen from the water, which suffocates the fish.

The NSW state government is preparing itself for a second round of mass fish deaths in the Darling River this week as the country suffers through a heat wave, with western NSW expecting very high temperatures — and the potential for Broken Hill to experience record-breaking maximums.

The temperature at Menindee is predicted to reach 46C in the coming days, where the Darling River’s water levels are already dangerously low. According to the Bureau of Meteorology, the heatwave we’re now in is likely to persist until Saturday — that’s a long period of high temperatures without relief for an already drought-stricken state.

Investment in renewables should remain ‘relatively high’ according to Vestas boss

Meanwhile, big and small business soldiers on in its embrace of renewables, despite a lack of policy to assist. Australia’s combined shared of renewable energy rose to 21% of the national electricity market generation in December, up from 16.1% in December 2017.

Peter Cowling — head of the country's biggest wind turbine supplier, Vestas Australia — is expecting the levels of investment in renewables (and supporting technologies like battery storage) to remain relatively high despite a lack of climate change policy under the Coalition government.

“We have the extraordinary position where there's effectively a consensus certainly among investors and major players, even regulators I'd suggest, and even consumers about wanting a timely and orderly transition to renewables: we're just missing one piece of the puzzle,” he said. “We are in rather uncharted territory to have no policy.”

Cowling also mentioned the various state programs in support of renewables projects which also help to fill gaps made by the dearth of federal policy on the issue.

While there’s plenty of money to be made in green energy and renewables investments at the moment, not all efforts in this space are going smoothly.

At the end of last week, ASIC handed down a stop order on Australian Super Solar Investments Ltd (which was seeking to raise up to $130 million in an IPO) according to the AFR.

The reasons for the stop order have not been made public, although the AFR’s article does mention the similarly named industry super fund, Australian Super...

Interestingly, Australian Super has nothing to do with the would-be listed company Australian Super Solar Investments Ltd — so anyone accidentally linking the two together could make a potentially costly mistake.

One of the people heading up the Fund is former Infigen Energy (ASX:IFN) executive Warren Murphy. Wind farm developer and owner IFN has been featured in this column before.

Since that initial coverage of the stock, it has plummeted a further ~21%. 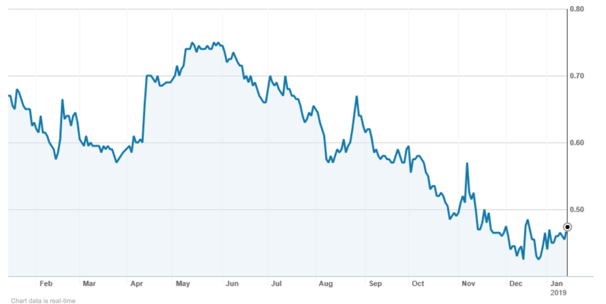 The small cap announced in mid-December that it had sold 100% of the Cherry Wind Farm project (in Seymour, Victoria) to the John Laing Group for $6.5 million — with its share price dropping ~11% in the week following the news.

IFN reported net debt of $531 million in its 2018 Annual Report, so that might go some way to explain why it sold the farm off in what it referred to as a ‘capital lite transaction’.

Its market cap is currently $435.2 million. Given those numbers, if there is a possibility of IFN being bought out by a bigger fish (which has been rumoured), there’s the chance we’ll be seeing more of the same while the small cap looks to balance its sheets.

As part of its announcement regarding the sale of the Cherry Wind Farm, IFN seemed to be flagging more tough times ahead:

“In addition to assessing these broader factors that influence the market generally, the Infigen Board has examined the specific regional market conditions associated with each development project. [...] As a result, the Board has determined that the Queensland solar pipeline is not likely to be developed by Infigen in the foreseeable future and additional costs would likely be incurred in reaching financial close for other pipeline projects.

“Against this determination a non-cash impairment of approximately $9-10 million is expected to be recognised in FY19 in relation to Infigen’s development assets. The impairment is noncash in nature and has no effect on Infigen’s banking covenants or free cash flow from operations.”

Given the small cap is down ~30% for the last 12 months, this is likely not welcome news for investors. Then again, others may see the company’s current slump as a buying opportunity — it all depends on how the market interprets IFN’s current strategy.