There’s been much hubbub on Twitter and in general discourse around the context of Morrison’s comment, said in relation to dispatchable electricity — which is generated predominantly from non-renewable energy sources. For that, and other reasons around the new PM’s over-use of the phrase ‘fair dinkum’, the comment has been the subject of much derision over the last week.

In response to the much-maligned new slogan, Cannon-Brookes, who boasts a net worth of $2 billion, launched a campaign which adopts the term ‘fair dinkum power’ in support of renewables and clean energy. 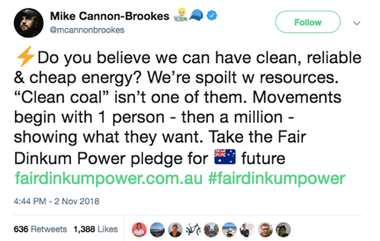 Cannon-Brookes is determined to get the message out, and is already offering ‘swags’ of merchandise carrying the ‘fair dinkum power’ phrase and registered logo.

In answer to the PM’s slated climate change policies, including the possibility of extending the life of existing coal plants and providing government support for new investment in coal projects, Cannon Brookes’ ‘Fair Dinkum Power’ could prompt further debate about the direction of the country’s climate change policies.

Cannon-Brookes told the ABC’s 7.30 program: "I think it (renewable energy) will clearly be the number one or number two issue in the election. Australia could be a renewable energy super power.

"We could be exporting massive amounts of power, we could have huge numbers of jobs here in this space. We've just got to have vision and insight to go after that."

As usual, there’s further climate change-related discontent this week, as wholesale changes impact an industry which had previously received much in the way of public scrutiny for its emissions’ contributions: international shipping.

Shipping must go green, but how will they pay for it?

The global maritime sector is in the process of adapting a new set of emissions standards, with two of the biggest companies — Maersk and MSC — stating that the shift to low-sulphur-emitting fuels will add US$2 billion to cost bases annually.

Maersk guessed that the total cost, worldwide, of complying with the new maritime emissions standards could be US$15 billion.

The big freight companies, unlikely to simply absorb those costs and allow them to cut into their profit margin, are wasting no time indicating their intentions to introduce considerable new surcharges. Which sounds like bad news for the end customer.

The Australian Financial Review put it this way: “This is expected to be cost flow-recovery on steroids. And Australian importers and exporters will start paying the still unclarified price for a greener maritime fleet from 1 January 2019.”

What’s clear in the minds of the vast majority of scientists and climate experts is that we must reduce carbon emissions, and without any further delays — the question to be hashed out now, across virtually every industry and community, is who should fit the bill?

Increasingly we will be faced with the need for customers, industries and governments to work together to find the fairest arrangement to get the job done.

We have mentioned CCE in Green Keeper a number of times over the last few months, and the small cap is yet again finding itself in the headlines.

CCE has been struggling with the government’s proposed changes to R&D tax incentives legislation, and in its September quarterly stated that the Bill had been referred to the Federal Senate Economics Legislation Committee for an inquiry. CCE is “looking forward to engaging in the process” and seeing a report from the inquiry due at the start of December.

The changes leave the $23 million capped junior’s Albany Wave Energy Project in a precarious position. However, the company “recognises the current tightness in its overall cash position and is considering the need to make further divestments of equity held in projects and investigate other funding sources”.

CCE has already started making ‘further divestments’. On October 24, CCE announced it had renegotiated and finalised an agreement with Tag Pacific to sell its Energy Made Clean solar and battery division. The deal will see Tag (ASX:TAG) acquire CCE’s Energy Made Clean business in exchange for the issue of shares equal to a 17.5% stake.

Back in June, the two companies had arrived at an all-scrip deal worth $4.1 million, which would have given CCE a 32% stake in TAG, but a number of factors meant that the initial deal didn’t stick.

It has been a rather frantic quarter for the company. In that period CCE has received a $2.6 million Albany Wave Energy Project Milestone payment, completed solar panel installation at its Northam Solar Farm, finalised a €1 million (AU$1.5M) Collaboration Agreement with global renewables player Enel Green Power and, settled its negotiations with TAG.