All hail hydrogen: Labor joins the party with $1B plan

The Labor Party today released its $1 billion ‘national hydrogen plan’, which it hopes will be able to tap into a $10 billion export opportunity, as well as creating thousands of new blue-collar jobs in Queensland.

The plan would see a national hydrogen innovation hub in Gladstone (about 500km north of Brisbane), designed to spur on the burgeoning energy storage technology that has made its comeback only recently — thanks to advancements made in the capacity to extract hydrogen cheaply, viably and without the process making its own Co2 emissions.

Hydrogen is being touted as a way to bolster the renewables sector by providing a back-up power source for times when wind and solar production ebbs.

Financially, this plan could be a win-win for all involved, because the national hydrogen plan would be primarily funded by the Clean Energy Finance Corporation — a federal green bank.

This would include $40 million for developing carbon dioxide capture and storage resulting from fossil-fuel powered hydrogen production; and $10 million from the Australian Renewable Energy Agency earmarked for developing technology around filling hydrogen-powered cars (as I’ve written about before, the portability of hydrogen as a fuel source is not straightforward).

Environmental groups may not be thrilled that $40 million of the funding would be earmarked for hydrogen created via fossil fuels — but carbon capture and negative emissions technologies (NETs) are both becoming increasingly high-profile climate change topics.

What are negative emission technologies (NETs)?

NETs are intended to remove excess carbon dioxide from the atmosphere, and store it in soils, vegetation, the ocean, deep geological formations or rocks.

There are several types, all with pros and cons, and the well-known process of photosynthesis – the simplest example, which is planting more trees — presents the lowest risk profile, and is the most well understood. But sadly, its use as an NET is hindered, now, by the sheer volume of carbon we have added to the atmosphere.

Dr Pep Canadell, from the global carbon project at CSIRO, told The Guardian in 2017 that “We would need as many as three Indias worth of land globally” for the method to combat client change and prevent the potentially disastrous 2 degrees celsius risk in temperature.

In recent years, Co2 capture and storage (CCS) has increasingly come up, in particular as a tool for companies and industries producing large emissions.

The Conversation wrote an in-depth piece on negative emissions tech in October last year titled ‘Why we can’t reverse climate change with ‘negative emissions’ technologies’; it included this handy table outlining the main NETs in existence: 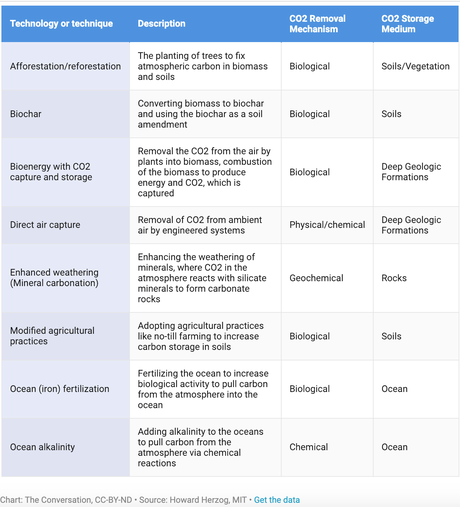 The advancements being made across these different types of NETs are fascinating, but as The Conversation’s article argues in its very name, these so-called 'negative emissions' tactics will be nowhere near enough to prevent catastrophic climate change, largely due to prohibitive costs and the scale of the problem.

As it stands, scientists generally agree that reducing our global emissions, and fast, is absolutely vital. But, there’s hope that NETs can be used to at least help stem the greenhouse effect.

Macquarie Group also in on the hydrogen hustle

Hydrogen power has been featured a few times in this column, like when Macquarie Group announced it would be providing ‘development capital’ to a $22 billion renewable energy hub project in WA.

The hub was originally conceived with the idea of exporting wind and solar power to Indonesia via underwater high-voltage transmission cables — but the focus shifted to supplying energy to mines, mineral processors and other industrial energy users in WA’s mining-centric Pilbara region.

As a secondary purpose of the hub, it would be used to help fuel the production of hydrogen, with the AFR reporting at the time that this was Macquarie Group’s foremost interest in the project.

The impression coming through is that Macquarie’s investment and financial services brand is pushing a strong renewables agenda — which many would see as a very smart move.

We have written about renewables junior Genex Power (ASX:GNX) before, and it seems the small cap began 2019 on the rise, with its share price up 10% in the last month.

This could well have to do with its major announcement in late December that it had signed a term sheet with Energy Australia for long-term hydro energy agreement and equity investment.

The deal relates specifically to a long-term energy storage services agreement and equity investment in GNX’s 250MW Kidston Pumped Storage Hydro Project, and means EnergyAustralia would have the full dispatch and market rights attaching to K2-Hydro.

Further, the terms provides for a proposed equity investment by EnergyAustralia into a newly created Special Purpose Vehicle (SPV) which will be incorporated to construct, own and operate the K2-Hydro project.

That said, the term sheet is non-binding and subject to satisfactory completion of due diligence, and approval from the EnergyAustralia board and GNX’s board.

It’s a fairly strong endorsement for the A$82 million capped company, and it would seem shareholders think so, too. Given the positive development, GNX is now looking to move to financial close for K2-Hydro in the first half of this year.