The past fortnight has seen record-breaking heatwaves in Australia, and on the other side of the globe, the US has gone into deep freeze lockdown mode that includes six states suspending postal services.

The enormous blast of frigid air sweeping through the country’s Midwest is on track to slam dozens of cold temperature records along the way. Already, the deaths of three people have been attributed to the nation-wide cold snap, and resulted in temperatures lower than those in Antarctica. Authorities have warned of ‘instant frostbite’ for skin exposed to outside air, in certain locations.

This Forbes article summarises how rising Co2 and climate change is responsible for the freezing temperatures being experienced by the US.

Extreme temperatures and extreme weather events related to human-made climate change are already here — and yet, governments of developed nations are still squabbling over not just the urgency of the issue but, in some cases, the very existence of the problem itself.

This week, NSW’s Darling River saw another mass fish kill. Unknown numbers, but surely in the hundreds of thousands of fish, have died yet again at Menindee, where the town is suffering through an ongoing ecological disaster brought on by extreme temperatures and drought.

The Darling River system is in dire straits, and many of the township’s residents are now being forced to buy water that’s safe to drink and wash in.

Is this the end times? You’d be forgiven for asking yourself, when each day, there’s a new weather record somewhere in the world, or a bizarre and extreme weather event filling the headlines.

The planet’s systems appear to be faltering one by one, in rapid succession, and it’s now difficult to embellish the size or urgency of the problem.

Still, we rely on the businesses (like the one below) to tackle what some governments, including Australia’s, are refusing to face.

More and more, owners of property are deciding to invest in their own renewable energy source, in place of other options.

4 Pines raised the money in an incredible 17 minutes, and will now have the cash for a 100kW solar system.

Investors taking part in the crowdfunding will receive a projected return of ~8% based off 20-year historical data on sunshine radiation and usage patterns. Behind 4 Pines’ venture is Pingala, ClearSky Solar Investment and Smart Commercial Solar.

Warren Yates from ClearSky referred to it as a “new class of investment” which could offer investors predictability, and with only one true risk area — the unlikely event of the end users going bankrupt.

US mid-cap Renewable Energy Group Inc (REGI:NASDAQ), a company which produces biomass-based diesel and biofuel and develops renewable chemicals, has taken the US market by storm in the last 12 months.

The latest news is that ExxonMobil has just signed a joint research agreement with Clariant to evaluate the potential use of cellulosic sugars from sources such as agricultural waste and residues to produce biofuel.

If you aren’t familiar with biofuels, they are liquid fuels derived from materials like waste plant and animal matter. The two types produced in Australia are bioethanol and biodiesel (used to replace or supplement petrol and diesel in cars).

The partnership with ExxonMobil, REGI and Clariant builds on joint research between Exxon and REGI proving the ability for REG Life Sciences’ bio-conversion technology, which creates biodiesel through a single-step process using sugars from cellulosic biomass. 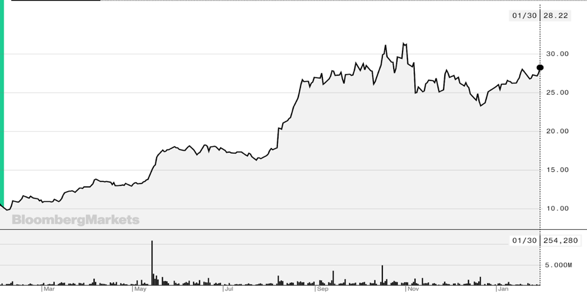 It’s an impressive performance, prompting a throng of new investors hungry for a similar green-tech bandwagon to jump on.

On the ASX, there are plenty to choose from, including bioplastics, solar, wind power, hydrogen and more — skim back over the Green Keeper columns of the last six months to get inspired.