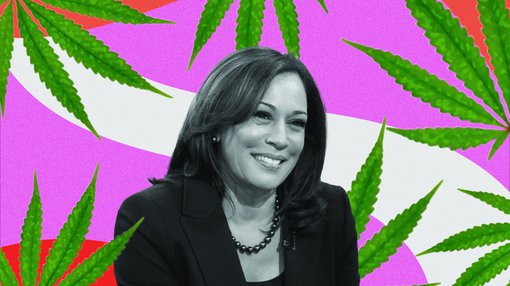 Joe Biden announced that Kamala Harris is his pick for Vice President, should he win the upcoming US Presidential election in November. But what could a Biden/Harris ticket mean for cannabis legalisation?

The hints and suggestions throughout recent months that Kamala Harris would be selected as Biden's VP pick have today been confirmed, with the Presidential candidate stating: "I've decided that Kamala Harris is the best person to help me take this fight to Donald Trump and Mike Pence and then to lead this nation starting in January 2021."

Now, as polls show Biden leading the race at 51% favourability compared with Trump's 41% among registered voters nationwide, according to the Monmouth University survey, it looks very possible that we will see a Biden and Kamala Presidency in 2021. Should this be the case, and Biden does take the mantle of Presidency in November, what does this mean for cannabis legalisation? Let's find out.

As we've discussed previously, Joe Biden hasn't historically been an ally to cannabis advocates and has changed his stance on cannabis multiple times throughout his candidacy.

Biden famously resuscitated the 'gateway theory' argument about cannabis, highlighting his fears of legalising the plant, before releasing his 'Plan for Black America,' which seeks to decriminalise cannabis on a federal level if Biden wins the Presidency.

While this represents a positive progression from the perspective of cannabis legalization, Biden's views toward cannabis remain somewhat obstinate compared with his prior Democrat Presidential candidates like Bernie Sanders and Elizabeth Warren, who both vowed to federally legalise cannabis for recreational use in the US.

Similarly, Kamala Harris's lengthy public career as a lawyer, prosecutor, senator and the Attorney General of California have not given cannabis enthusiasts much to be excited about. In fact, one of the defining moments during Harris's Presidential bid in 2019 was when Tulsi Gabbard brought up Harris's career in law enforcement, saying:

"She put over 1,500 people in jail for marijuana violations, and then laughed about it when she was asked if she'd ever smoked marijuana. She blocked evidence that would have freed a man from death row until the courts forced her to do so. She kept people in prison beyond their sentences to use them as cheap labor for the state of California. And she fought to keep cash bail system in place that impacts poor people in the worst kind of way."

Many considered Gabbard's statements about Harris as the nail in the coffin for Kamala Harris's Presidential campaign, as Kamala's polling began to decline precipitously following Gabbards comments, and Kamala promptly pulled out of the race shortly thereafter.

Though Kamala has made attempts to distance herself from her harsh anti-cannabis history, having since become a cosponsor of the Marijuana Opportunity, Reinvestment, and Expungement Act (the MORE Act) which seeks to not only legalise cannabis and expunge cannabis-related crimes from records, but also to allocate additional funding to people of colour to mitigate the racially disparate impacts of the Drug War.

Will a Harris/Biden Win Result in Federal Cannabis Legalisation?

Joe Biden's pick for his VP was of particular relevance this year, given growing concerns about Biden's cognitive capacities, which have led to nearly 40% of voters believing that Biden is suffering from a mental decline. For this reason, predictions are arising suggesting that Biden's VP pick could very well automatically become the President at some point if Biden does indeed step down throughout his first term, with CNN Tweeting:

"Joe Biden made the pick that maximised his chances of continuing to make the race a straight referendum on Trump while also selecting someone whose resume suggests being ready to step in, if and when Biden decides to step aside."

If Biden secures the Presidency in November and "steps aside" sooner rather than later, we may see a transition into a Kamala Harris Presidency, either in an explicit or "de facto" sense over the next few years.

Though whether she's VP or the President of the US, Harris's recent support of the MORE Act indicates that some positive change will likely occur within the industry should Biden win the Presidency. Moreover, decriminalising or federally legalizing cannabis would be a good method for Kamala Harris to distance herself from Tulsi Gabbard's comments last year, which painted Harris as a staunch, anti-drug legislator.

With current polls showing Biden to be the favourite in the upcoming election, it remains to be seen what impact his choice of Kamala Harris as his VP will have on his favourability moving forward.

Originally published on The Green Fund.

Louis O'Neill is a writer based in Sydney with a focus on social and political issues. Having interviewed local politicians and entrepreneurs, Louis now focuses on cannabis culture, legislation & reform.

How (and why) companies are mixing Terpenes into Cannabis Distillates Will 2021 be the year the cannabis industry makes a comeback? The world in medical cannabis and weed this week Would the legalisation of recreational cannabis fill a budget black hole?