Top Trends for the Cannabis Industry in 2020

The global cannabis industry faced a lot of hurdles in 2019. From CannTrust growing illegally in unlicensed grow rooms, to Constellation Brands letting the industry know the era of big-spending was over when they fired Canopy Growth's CEO, Bruce Linton. Then came the capital crunch as companies simply did not meet expectation (or worse guidance) and investors left the pot high and dry.

As the industry reeled from Canada's disastrous recreational market growth (or lack of it), with the wrong product mix and a complete lack of retail stores to buy from, there was another very sinister blow coming, this time to the South.

Over the North American summer, the US was rocked by the vaping crisis with 1000's of people admitted to hospital and over 47 deaths recorded as being related to the e-cigarette or vaping product use-associated lung injury (EVALI). The crisis looked set to cripple the US recreational industry as the FDA came out and told people to stop using vapes. The fastest-growing sector of the industry, and the most in vogue form factor, looked set to potentially collapse, as some recreational US states even banned its use. 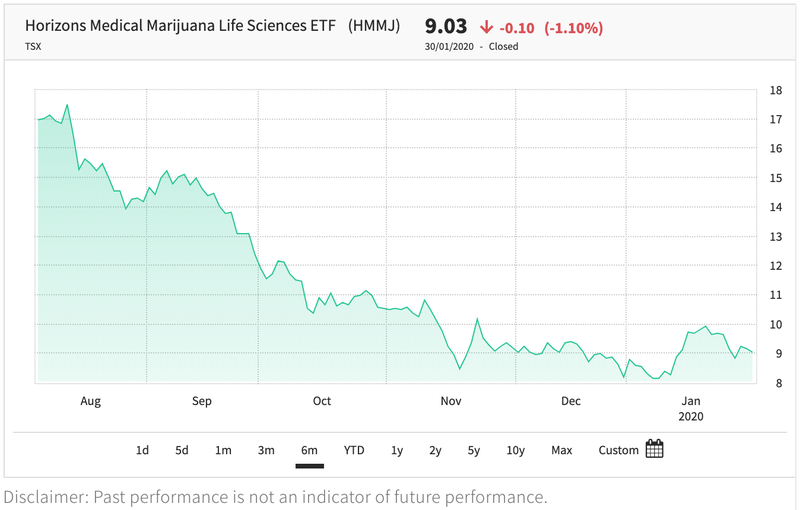 And, let's not forget the market itself. The Horizons Marijuana Life Sciences ETF (HMMJ) is the world's largest electronically traded fund, with over $1.3 billion under management. The HMMJ peaked at $23.64 on March 20, ending 2019 on $8.13, around 70% down over the 9-month period. Yeah, you read that right.

So what does this year hold?

The rise of the US MSOs

Canada has, until now, been the market leader when it comes to all things cannabis. Canada has the largest cannabis companies in the world and was the first G7 nation to legalise cannabis at the federal level. However, we see a significant power shift away from Canada and down South to their neighbours in 2020.

Although Canada looks set to continue to lay claim to the largest cannabis company on the planet – Canopy Growth (market cap of $9.3 billion at time of writing), there are a couple of the larger MSO's that are starting to make up ground, specifically Green Thumb Industries ($2.58 billion), Curaleaf ($4.0 billion) and Trulieve ($1.44 billion).

With the winds of change sweeping across the US (see legislative changes below), and the cannabis market continuing to grow via new states like Illinois and Massachusetts, we are firm in our belief that the US offers investors the best opportunity for gains in 2020. Following the harsh pullback of 2019, many of these stocks are currently trading at values that offer investors significant upside.

New US States will legalise in 2020

Assisting the rising MSOs is the continued State-by-State legalisation of cannabis for either medicinal or recreational use (or both in some cases), and this trend looks set to continue on in 2020. Just last week New York Governor Andrew Cuomo stated that cannabis legalisation was very high on his agenda for 2020. New Jersey will almost certainly legalise recreational use in November via ballot initiative.

Another big state in the mix is Florida. It is increasingly likely that Florida could also legalise for recreational use in 2020. Already considered one of the most lucrative medical markets (given the demographics of Florida residents), the existing footprint of dispensaries (Trulieve has 39 on its own) means that recreational should gain momentum very quickly.

We will also see potential legislative initiatives, in Arizona, Connecticut, Minnesota, Missouri, Nebraska, New Mexico, North Dakota, and Oklahoma. Although to be fair, we don't envisage more than one or two them will actually legalise in 2020.

The winds of legislative change will continue to blow

Although we believe there may well be an election drive that favours legalising cannabis at the federal level, we do not see this happening in 2020 (but rather in 2021/22). The latest Pew Research poll has over two-thirds of Americans in favour of federal legalisation, and with the Farm Bill of 2018 legalising Hemp, we see continued growth in acceptance and consideration of the lifting of cannabis prohibition. 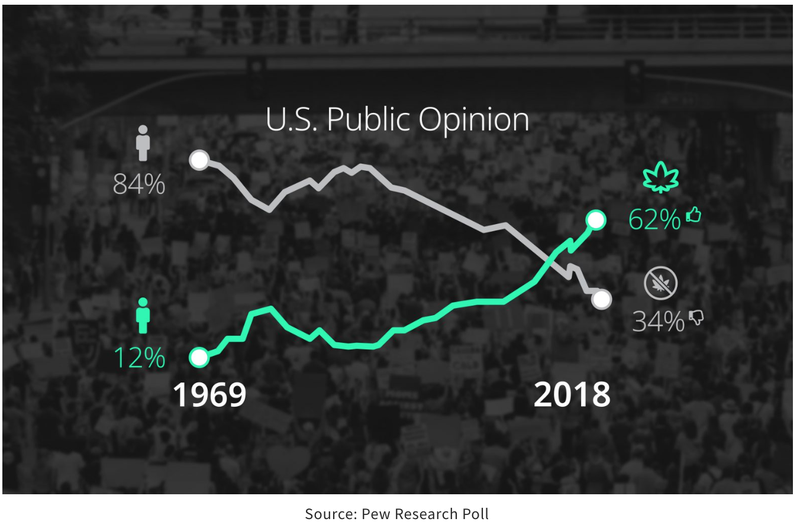 However, we do see an opportunity to advance legislation without actually legalising cannabis entirely. The SAFE Banking Act could provide much needed commercial banking services to the industry and allow companies to not have to operate under the 280E tax rule (meaning no expenses can be offset against sales leading to exorbitant tax bills).

Again, in Congress, we predict progress but not a complete victory. The Marijuana Opportunity Reinvestment and Expungement (MORE) Act should pass the House, but we do not believe (at the present time) that it will pass in the senate. The MORE Act is the most progressive cannabis bill to date, and would remove cannabis from the Controlled Substances Act, effectively decriminalising it at the federal level.

The FDA and the DEA on CBD

In December 2018, President Donald Trump executed the Farm Bill of 2018, which legalised hemp for the purposes of industrial and/or commercial production. This, in turn, opened the floodgates for hemp-derived CBD products. With the Brightfield Group estimating the CBD market to top $22 billion by 2022, it is clear to see what this is considered the next "green rush".

However, almost immediately after the Bill was signed into law, the FDA came out and prohibited any companies from making any medical claims as to the treatment or efficacy of CBD-derived products. The market is desperately lacking guidance around CBD and we firmly expect to see the FDA (and the DEA for that matter) come out in 2020 and lay the ground rules for how the product can be produced, manufactured, marketed and sold.

We welcome such legislation as it will give considerable protection to some of the larger and more reputable CBD companies (like Charlottes Web and CV Sciences), and give confidence to the consumer that they are getting what's on the "side of the tin".

Mark Bernberg is a long-time cannabis investing enthusiast and founder of The Green Fund, Asia Pacific's preeminent media house, positioned at the forefront of the global cannabis industry.

Latest articles on The Green Fund