CropLogic Limited (ASX: CLI), today announced that its Hemp Trial Farm in Central Oregon has entered the fourth stage of development as the plants have begun to flower with drone footage of the crop confirming advanced growth and the plants in flower.

Flowering is a significant milestone for the Hemp Trial Farm as it is in the flowers that the CBD producing oils are predominantly found.

The award-winning global agronomy, farm management and agtech company has employed growing methodologies to encourage the development of flowers — principally employing a non-competition methodology of crop spacing and growing sometimes called the ‘Christmas Tree’ approach as the hemp plant grows in a shape similar to a Christmas Tree.

In investigating industrial hemp, CropLogic determined that hemp has a tendency, like many plants, to stop spreading out and grow higher when it touches or senses a neighbouring plant. This spreading out involves hemp plants producing ‘laterals’ (branches). Each lateral has the potential to produce flowers and CBD producing oils are predominantly found in hemp flowers.

As such, the close spacing methodology for fibre production is less suitable for CBD production and CropLogic has adopted what has become known as the ‘Christmas Tree’ approach, a CBD Maximising Methodology that allows the plants room to spread out and produce many flower producing laterals.

Here’s a good example of a hemp plant grown under the Christmas Tree approach. Note the many laterals and then the buds (flowers) on each of the laterals. 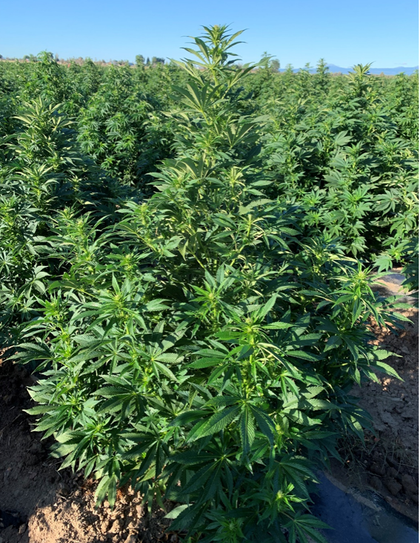 Using its agronomy and farm management expertise, CropLogic has developed an irrigation and fertigation strategy designed to optimise the plant laterals, flowers and general plant development in the Christmas Tree approach.

This consists of irrigation and fertigation applications that focus on the development of plant mass and structure in the earlier part of the season in developing root systems and plant structure in the form of leaf mass, stalk and laterals. This forms the foundation on which the plant can healthily propagate and develop CBD producing flowers.

The CBD Maximising Methodolgy is monitored and further optimised by the use of CropLogic agtech, including CropLogic realTime and CropLogic Aerial Imagery. This allows CropLogic to evaluate the effectiveness of the methodology in season and adapt where necessary. 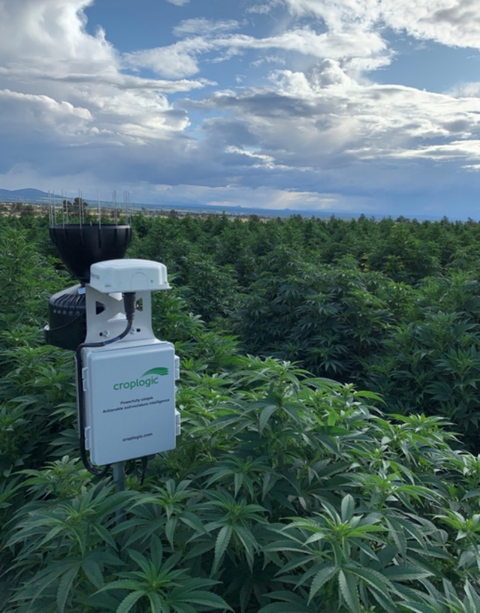 CEO James Cooper-Jones said of the flowering, “CropLogic is encouraged to see its agronomy, farm management and agtech expertise come together in this manner as the Hemp Trial Farm moves to the fourth stage of flowering.

“This adds greatly to not only our Hemp Trial Farm but the ability of CropLogic to offer this agronomy, farm management and agtech expertise to the hemp industry generally.” 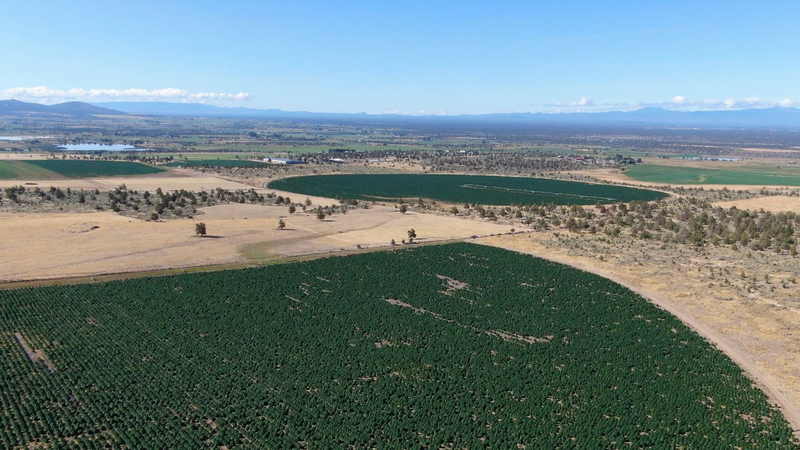 CropLogic has conducted a direct seeding autoflower trial. Conventional hemp is photoperiodic — meaning it relies on the light cycle, generally a 12-hour day of light, before it will flower. Yet a non-photoperiodic variety of hemp, such as the autoflower variety, will flower in a set number of days from planting.

Autoflower plants and their yield are generally smaller than conventional hemp however being less seasonally dependent means there is potential for them producing several crops a year, providing an opportunity to bring product to market when supply is otherwise limited and prices are strong.

CropLogic has trialed several acres of autoflower this season that were direct seeded. The results to date have been encouraging and have broadened CropLogic’s agronomic and farm management understanding of autoflower and hemp generally. This knowledge will benefit the company in servicing autoflower fields in the future and autoflower may present a future larger scale option for CropLogic in coming years.

CropLogic has also trialed direct seeding this season. The majority of the acres of Hemp Trial Farm have been planted using ‘starts’ seedlings which has been a successful method of cropping hemp.

However, planting ‘starts’ comes at a cost and is a more involved method of planting. As such this may present limitations at scale.

CropLogic applied its agronomy and farm management expertise to increase germination rates, modifying such things as fertigation and irrigation and monitoring soil temperature.

The results of CropLogic’s direct seeding trial are encouraging and well above the germination rate of other fields noted.

CropLogic believes that seed coating may have viability in future seasons and assist in reducing costs and increasing the potential to grow to larger scale.

Having also generated results well above those observed on direct seeding fields of other growers, the knowledge gained from this trial will also benefit CropLogic when approaching the hemp market with its agronomy, farm management and agtech services.

Now that plants are flowering, the next step on the path to harvest will involve compliance testing: 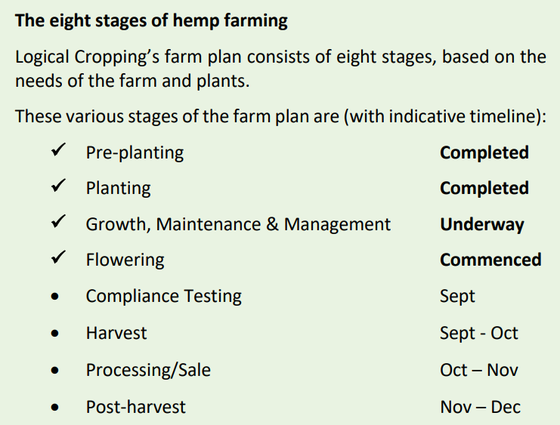 CropLogic CEO James Cooper-Jones confirmed that “Harvesting of CBD producing hemp at our 500-acre Hemp Trial Farm in Central Oregon is on track to commence late September and run through October.”