North American cannabis stocks have been rocked by scandal lately.

One of the biggest shocks to the market came with the axing of the man considered to be the face of legal cannabis in North America.

Bruce Linton was fired as the co-CEO of Canopy Growth after a disappointing financial performance in Q1 2019.

The sacking rattled the industry, however Linton quipped in his keynote address at the National Cannabis Industry Association’s Cannabis Business Summit: “I can confirm there is no such thing as job security, no matter what you do”.

Linton had some sage advice for cannabis companies in his speech, proving he’s not bitter about his parting of ways. He said marijuana companies should look to locate in economically distressed towns or areas that are looking for injections of capital and jobs that cannabis businesses can bring with them. He believes alcohol giant Constellation Brands and others will be able to turn around stock prices that may have dipped in recent months. European marijuana markets will accelerate rapidly due to socialized medical programs in place that will help establish medical marijuana programs. The US needs to reform federal marijuana laws quickly, before the US falls behind global exporters.

This article by Yahoo Finance suggests, Constellation may not have the knowhow to successfully replace Linton.

The article also states that a drop on Canopy’s price may not be a bad thing for the market.

“The good news to me is Canopy Growth isn't likely to recover from the hyped-up expectations surrounding it, and that means expectations for the company and industry will lowered to more realistic levels, and after the bearish sentiment dissipates, there should be a nice rebound for Canopy and the industry in general; although I think isn't likely to enjoy the change in sentiment as much as its competitors will, primarily because of the decision to release Linton of his duties.” 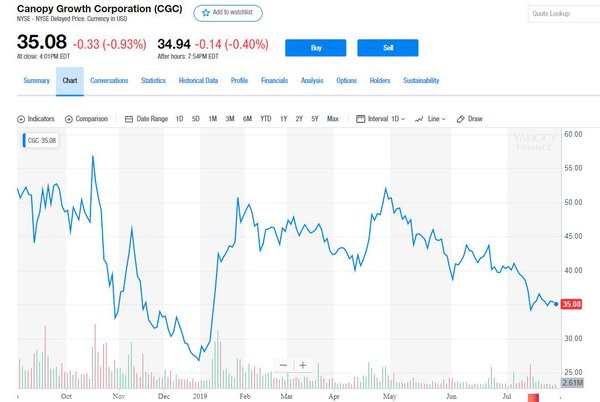 Over at CannTrust Holdings Corp, shares slumped more than 20% on the TSX to $2.70 from $3.43 after reports that chairman Eric Paul and its chief executive Peter Aceto knew that the firm was growing pot in unlicensed rooms at its Ontario greenhouse.

The company is now being investigated by Health Canada after it discovered CannTrust was growing cannabis before it was licenced to do so.

Nearly 13,000 kilograms of cannabis products have been put on hold, with CannTrust voluntarily halting all shipments and sales of its products until the investigation is complete.

Curleaf is the third North American company to make the news recently, following a warning by the Food and Drug Administration that it considered Curleaf’s lotion, pain-relief patch, tincture and disposable vape pen to be drugs because they claim to treat conditions like pain, anxiety and ADHD.

The company has 14 days to respond.

“Selling unapproved products with unsubstantiated therapeutic claims - such as claims that CBD products can treat serious diseases and conditions - can put patients and consumers at risk by leading them to put off important medical care,” acting FDA Commissioner Ned Sharpless said this week.

“There are still “many unanswered questions about the science, safety, effectiveness and quality of unapproved products containing CBD.”

As the US suffers, there’s one Australian stock worthy of a watchlist

On Wednesday 25 July, Althea emerged from a trading halt that saw its shares rise by 12%.

The announcement that piqued investor interest related to the acquisition of Canadian extraction and contract manufacturing company Peak Processing Solutions.

The cash component of the consideration to be paid by Althea will be funded via a A$30 million placement, which will be conducted at A$1.00 per new share, which represents a 16% discount to the last close price.

Althea Chief Executive Officer Josh Fegan said: “We are very pleased to have entered into this agreement to acquire Peak Processing Solutions, including their team of tremendously experienced cannabis operators. We see huge potential in the cannabis-infused segment and on top of delivering great value to our shareholders, Peak provides Althea access to innovative technologies and cannabis delivery systems which we can utilise to enhance our range of medicinal cannabis product offerings.”

This week, MGC Phamaceuticals (ASX:MXC) was up as much as 15% before correcting at 7.5% to close at 5.7 cents on Wednesday.

MXC’s pre-clinical research has highlighted the positive impact of using specific cannabinoid formulations in the treatment of glioblastoma, the most aggressive and therapeutically resistant primary brain tumour.

The research, conducted in collaboration with the National Institute of Biology and University Medical Centre Ljubljana, is seen as a major scientific breakthrough in respect to successfully applying cannabinoid compounds on cancerous cells.

Co-founder and managing director, Roby Zomer said: “This research is a major breakthrough for the treatment of tumours with cannabinoid-based formulations and has wider implications on different cancer treatments. The full research report successfully shows that compounded cannabinoid formulations can have a positive effect on the treatment of glioblastoma, reducing the growth of a tumour cell and killing the cancerous stem cells. We are now creating a cannabinoid compound matrix which we can utilise to target a wider range of cancers and significantly advance our R&D capabilities.”

Zomer believes this breakthrough could be a game changer for the company.

Time will tell whether that is true or not, but it seems Australian stocks are having a better time of it than their North American cannabis counterparts.