Cannabis stocks got smashed again in September, with the vaping crisis placing additional downward pressure on sentiment and outlook.

As I sat down to write this post, I reflected on the disclaimer we put under any graphs we post: past performance is not an indicator of future performance. Well, thank f*** for that! September brings to a close the sixth consecutive month of plummeting share prices, market confidence, and investor sentiment.

The Global Cannabis Index declined 16% in September, leaving the index 16.8% down year to date.

The Canadian Cannabis LP Index declined 16.2% in September, leaving the index 16.4% down year to date. 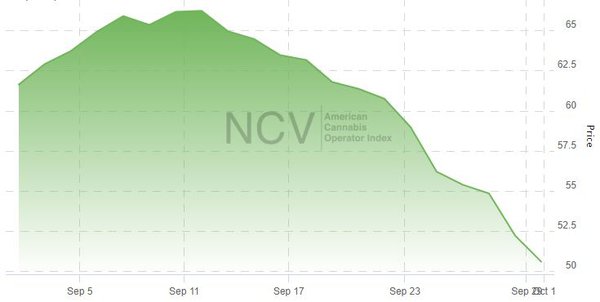 It has been an incredibly tough few months for cannabis stocks. Given the fact that the industry is still so nascent, cannabis stocks are heavily influenced by investor sentiment, and right now institutional investors are seeking to avoid the risk, and retail investors flee the sector to find better opportunities in other short-term growth areas.

This is not a new occurrence for cannabis stocks. There have been many periods in the past where there have been months of continuous price declines. These periods were almost always followed by a green-swan event, which acted as the catalyst that drove a stock rally.

Events like Constellations' first and second investment in Canopy Growth, Altria's investment in Cronos, and major legislative events such as the Canadian elections of 2016 and California's legalisation in January 2018.

Right now there is only Canada's legalisation of edibles and extracts on the horizon that could be a green-swan style event, but the vaping crisis has quickly scuttled that potential.

At the time of writing, there have been over 805 reported cases and 13 deaths across 46 US states. People are arriving at the hospital with symptoms like difficulty breathing, vomiting, stomach pains and fevers, and all as a result of using illicit vape equipment and oils.

To date, there have been no definitive answers as to what is causing this epidemic, but it is being speculated that Vitamin E Acetate – a cutting agent used to thicken cannabis oil for resale purposes in the black market – is behind the spate of illnesses.

In a time when calmness is needed, hysteria is starting to take control. Already, Massachusetts has placed a complete ban on all vaping products until February next year (to give authorities time to figure this out). And just last week, a council member in Los Angeles called for a temporary ban on all cannabis vaping products.

It seems most — if not all — of the hospitalisations were related, not to e-cigarettes, but illicit street vapes. If vaping products are banned or restricted we can expect to see more stories like this as people increasingly turn to the black market.
– Michelle Minton, Competitive Enterprise Institute

The only reason people were using the black market in the first place, is either because the product is not legally available in their state, or if it is, it is simply way too expensive. This is not the time to be making hasty policy decisions that may actually aggravate the situation. Rather, this is the opportunity to better understand how legalisation and quality controls could be the best form of defence.

It's way too early to know what regulators are going to do (or not do), but the impact has already been significantly felt throughout the cannabis industry. Vape sales are down, and public companies heavily exposed to the vaping industry have been heavily oversold.

However, September certainly wasn't all doom and gloom. This is a nascent industry, that continues to grow and develop on a global scale. During the month, two key legislative changes took place in both the Northern and Southern hemispheres.

One really positive moment in September was the SAFE Banking Act being passed (by a majority vote of over 70%) in the United States House of Representatives. The first significant piece of cannabis legislation to pass through the House, this represents a very firm step forward for the industry.

Because cannabis is still illegal at the Federal level, it is illegal for financial institutions to do business with companies that touch the plant. The SAFE Banking Act essentially grants "amnesty' to these institutions and governs the way they can engage with these companies. This would finally allow cannabis businesses to deal with the major credit card companies.

The bill will now need to pass through the Senate Banking, Housing and Urban Development sub-committee before a vote in front of the full Senate (potentially by the end of the year).

This month saw Canberra's local government legalise the possession and cultivation of cannabis for adult recreational use. Before you get too excited and book your next vacation there, although it's legal to possess up to 50 grams and grow up to 4 plants (per household), you cannot buy it (or sell it). I know what you're thinking, but still, it's a good first step.

And so to October

Canada Legalisation 1.0 has been pretty amateur in its rollout and execution. With almost no brick-and-mortar retail and a very poor product selection, the numbers coming in over the past 12 months have been extremely underwhelming.

Legalisation 2.0 of edibles and extract, due later this month, was supposed to be the big catalyst that would drive the market, the revenues and the stock prices. However, recent news of the first "vaping victim" in Ontario, has placed serious doubt over whether vaping products will be part of the 2.0 launch or not.

Investor sentiment needs repairing and valuations could remain under pressure in the short term.

On the back of lackluster results, the firing of Bruce Linton, CannTrust's implosion, and with the vaping crisis now looming large in the minds of the regulators, I think it would be fair to say that investor sentiment needs repairing and valuations could remain under pressure in the short term.

The US cannabis stocks have been even harder hit than their northern compatriots. But this is still undoubtedly where we believe the real value lies in the short to medium term. Although there have been delays with the Department of Justice's Anti-Trust division looking into the mega-mergers that took place earlier in the year, everything points to a positive outcome. We expect that once these deals do close, it could reignite interest in the space and start to move the sentiment dial.

But then again, past performance is not an indicator of future performance.

Article reprinted with permission of The Green Fund.

Latest articles on The Green Fund