Have a tall glass of cannabis beer on Canada

The 420 Report is a regular pot-flavoured column for everything relating to the buzzing legalised cannabis space, including global news, tech and pharma innovations, and pot-stocks across the world. Read on for this week’s highs, and stay tuned each Friday at 4.20pm.

In just 39 days, Canada will legalise recreational weed, bringing an end to 95 years of prohibition.

While some 30 countries around the world have given the green light to medical cannabis, Canada will be only the second country — and the first industrialised nation — to fully legalise the drug.

Once this kicks in on October 17, Canadian legal pot sales could reach $6.5 billion by 2020, according to a recent report by CIBC analysts — exceeding the $5.1 billion that Canadians spent on spirits in 2017 and coming close to the $7 billion spent on wine.

CIBC estimates that the private sector will be able to generate close to $1 billion in EBITDA (earnings before interest, taxes, depreciation, and amortisation), with 85% coming from production, and the rest from retail.

When it comes to the medical cannabis market specifically, the report predicts that this segment could be worth $267 million in the next two years, an increase of 42% from CIBC’s 2017 estimate.

It's these kinds of hefty figures that have sent pot-stock valuations soaring to new highs.

Canada’s impending legalisation of pot has been one of two central catalysts for the recent ascent of Ontario-based Canopy Growth (NYSE:CGC | TSX:WEED) — a pot-stock that’s leading the global crop.

Canopy Growth has become the first pure-play pot-stock whose valuation has entered the large-cap corridor (that is, with a market cap of at least $10 billion).

Of course, as with any stock, you should consider your personal circumstances before making an investment decision and seek professional financial advice if considering any of the stocks listed on this article for your portfolio.

The other major catalyst to trigger these highs has been the company’s intensifying relationship with beverage giant, Constellation Brands (NYSE:STZ) — the company behind Corona beer.

Last year, Constellation — one of the first major alcohol makers to invest in the cannabis industry — funnelled almost US$200 million in Canopy in a deal to produce a non-alcoholic pot-based beverage.

Then, on August 15 this year, Constellation invested another US$4 billion into Canopy Growth — the biggest investment in the industry to date — to capitalise on blooming demand for marijuana.

Since then, Canopy Growth shares have rallied more than 114%. Average daily volume has surged to more than 20 million shares, up from an average of 2.6 million shares in the one month prior. More broadly, in the past 12 months, the $14.6 billion-capped Canopy Growth has shot up some 600% — from C$9.10 to C$50.67 per share. 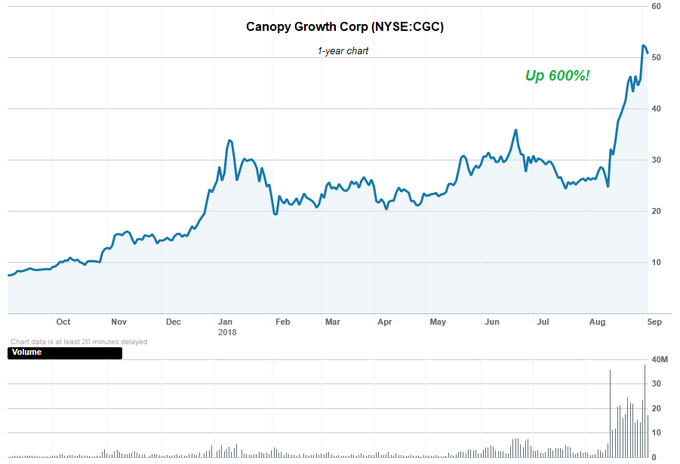 Other Canadian and US pot-stocks have followed suit. Vertically integrated cannabis play, Cronos Group (TSX:CRON), has surged up to 120% since the deal. US$7.5 billion-capped newbie Tilray (NASDAQ:TLRY) — which debuted on NASDAQ in July as the first US cannabis IPO — has been up as much as 16%.

What’s clear here is the resounding endorsement that comes with Constellation's US$4 billion investment — the emphatically mainstream belief that pot is a long-term growth driver.

Constellation CEO, Rob Sands, expands on this in the short Bloomberg Markets interview below: 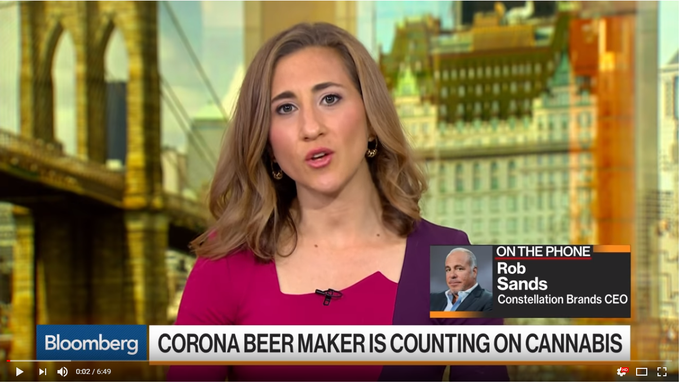 Recreational cannabis use is allowed in nine US states and the District of Columbia — sales in US legal markets should nearly triple to US$16 billion by 2020 from US$5.4 billion in 2015, according to Euromonitor International.

Constellation isn’t planning to sell a drinkable cannabis product in the US before legalisation happens across the nation, but it may begin doing so in Canada next year.

A hard-earned thirst used to warrant a big cold pot of beer.... But in an era of legalised cannabis, it more fittingly merits a cold pot beer — and that’s exactly what we’re getting.

The marriage of cannabis and beer is very much an on-trend theme right now, with alcohol giants like Constellation, as well as Molson Coors Brewing Company (NYSE:TAP), investing heavily in developing cannabis-infused beverages. Another drinks giant, Diageo (NYSE:DEO), is also rumoured to be entering the field.

Given the shifting global sentiment towards pot-based products, consumers are becoming much more comfortable with the idea that cannabis-infused foods and beverages can in fact be delicious.

One ASX-listed small-cap that’s honing in on this quickly changing landscape is Creso Pharma (ASX:CPH), which recently finalised the branding for its range of cannabis terpenes infused Old Boy Mary Jane beers.

Samples of this product — being brought to market under the CLV Frontier Brands Pty Ltd joint venture, which includes LGC Capital (TSX-V:LG) and Baltic Beer — have already been sent to Europe, Israel and Australia. New beers are set to launch in the UK in October. 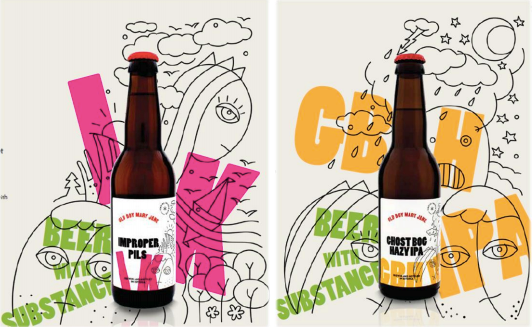 These beers contain blends of organic essential oils called terpenes that give cannabis its distinctive aroma and flavour.

The terpenes used in the beer will carry the unmistakable fragrance and flavour of cannabis, but they aren’t derived from cannabis. They also won’t contain THC (tetrahydrocannabinol) — the compound found in cannabis that gets you high.

CLV has developed a state-of-the-art brewery in Estonia to develop the beers, as well as other adult soft drinks. Inside the facility: 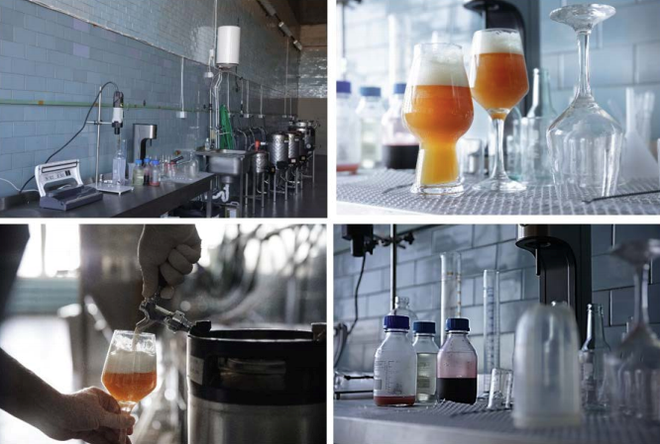 The JV is talking with distributors in Canada, which contains an ample consumer base with a healthy appetite (and thirst) for cannabis-based products – and where intensified demand is expected come October.

Following in the footsteps of Constellation et al, Creso is making its beer move at a smart time, as the popularity of craft beer continues to surge.

In Australia alone, the craft beer market is worth $160 million. There’s also a growing number of brewers and brewing entrepreneurs looking to add to the 150 plus microbreweries that currently make up that number.

This isn’t exactly new — and as person who resides in Melbourne’s inner north, I’m not very much surprised. But this seems to be a boom that isn’t just confined to the province of the much-maligned hipster and millennials set.

IBIS has forecast that the craft beer industry will grow by 5% over the next five years. According to Grand View Research, the global craft beer market is expected to reach US$502.9 billion by 2025 on the back of rising demand for low alcohol by volume and flavoured beer.

Another flourishing market at play here is that which relates to cannabis edibles — from cannabis cocktails to pot-infused chocolate and beyond.

The non-flower edibles market in the US is worth at least $3 billion, with candies, beverages and baked goods making up about 15% of that figure. Assuming similar market share, edibles will be a billion-dollar business in Canada within two years.

The growing appeal of the edibles and cannabis craft beer markets seems to be a direct result of pot’s march towards legalisation — and, interconnectedly, the gradual movement away from cannabis-related stigma.

Zoe is an experienced writer, editor and researcher who has created content across a diverse range of spaces, from the arts, lifestyle and politics, to technology, health and finance. Zoe is particularly interested in investigating stories around tech innovation and new media. She frequently writes about medicinal cannabis, biotech, and crypto culture. Based in Melbourne, she’s also a sometimes essayist, blogger and film critic, and has a PhD from the University of Melbourne.