Home to more than 740 million people — a population more than double that of the US and Canada combined — Europe is set to become the world’s largest legal weed market over the next five years.

A new report launched at Davos by legal cannabis expert, Prohibition Partners, maintains that steeply rising patient numbers and legislative progress have created a "transformative" backdrop for medicinal cannabis use in Europe.

The European Cannabis Report 4th Edition reveals that the region is poised for record-smashing growth over the coming years.

According to its findings, Europe’s cannabis market is estimated to be worth up to €123 billion by 2028.

Of that total market, the market for medicinal marijuana specifically could reach €58 billion during that time.

Over the last 12 months, the European pot industry has grown more than it has in the last six years. Six countries have announced new, positive legislation, and over €500 million has been invested in European cannabis businesses.

Throughout 2018, a crop of European countries introduced, reviewed or announced future legislation to advance the legal weed movement, and there are now 14 European countries where prescription pot is legal. The UK, Portugal and Malta have legalised medical cannabis products, and the Netherlands, Denmark and Germany have either issued cultivation licences or plan to introduce a tender for global cannabis producers. Even conservative governments in France and Ireland have proposed new cannabis bills or committees to review the legal status of medical marijuana.

The versatility of the plant could also have significant implications across multiple sectors, including textiles, beauty and wellbeing, leisure, manufacturing, and food and beverage.

The lion’s share of growth will come from the German and Italian markets. The German market is currently worth an estimated €133 million and is set to be worth more than €1 billion by 2020.

Germany legalised medicinal cannabis in 2017. One of the most progressive bills, the list of eligible conditions is quite broad, and this led to an immediate jump in the number of registered patients from 1,000 to over 40,000. Germany is also the first country in the world to cover the cost of medical cannabis (for any therapeutic application approved by a physician) through its national health insurance system.

Stephen Murphy, Prohibition Partners co-founder, explains: “The European cannabis market is undergoing a transformative moment, driven by skyrocketing demand. This has pushed national governments across the continent into action and Europe is poised to become a hotbed for medicinal development.”

Murphy also believes that political event-driven change can act as a catalyst for further growth.

“Most countries base their legal status on WHO/UN Drug Conventions. WHO is now reassessing the legal status of cannabis, and EU Committees are looking at how to regulate cannabis usage internationally. This will fuel rapid growth in the coming years.”

While the report maintains that patient demand is high, it notes that access is still restricted in many countries.

Murphy says: “While medicinal cannabis has been legal in several European countries for a number of years, the report shows very few countries have the infrastructure or proper legislation in place to supply patients. Except for the Netherlands and Israel, they rely on cannabis imports to deal with patient demand.

“While we understand cannabis can treat over 60 conditions, we lack the clinical data that is key to unlocking full market potential. Reliable, replicable research will be vital to persuading conservative governments to enact reform; shrinking the gap between political legislation and healthcare regimes and leading to eventual mainstream adoption.” 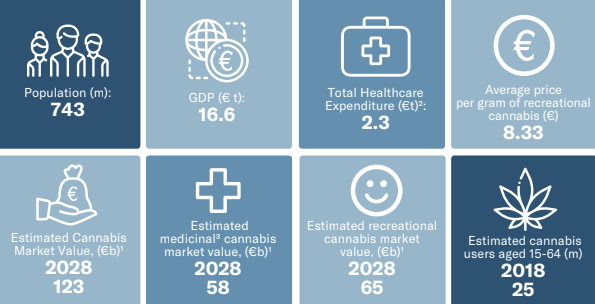