This week’s 420-related newsfeed seems imbued with a potent dose of the surreal.

These headlines could well be the stuff of stoner movies like Dazed and Confused, Cheech & Chong’s Next Movie, Fast Times at Ridgemont High, Bill & Ted’s Excellent Adventure, and Dude, Where’s My Car?

As you’ll see in a moment, predictably enough, these film titles have themselves become rich material for entertaining wordplay in current news reporting.

But it’s also worth noting that these kinds of movies, which tend to be unapologetically juvenile and deliberately dopey, are preceded by (and are perhaps responses to) a fairly bleak period of cinematic history which saw anti-drug cautionary tales coming out of the American popular imagination as early as the 1930s.

Take, for example, the 1936 American movie, Reefer Madness — one in a series of anti-marijuana propaganda films released at the time that helped fuel hysteria about the drug.

This cycle of sensationalistic films reflects a range of cultural anxieties around pot and a perceived connection to everything from criminality, race and mental illness to communism — anxieties, in turn, that play into a long history of prohibition.

Originally called Tell Your Children, Reefer Madness centres on a series of hyperbolic events that ensue when innocent high-school students are lured into trying pot — from a hit-and-run accident, to manslaughter, suicide, attempted rape, hallucinations, and a rapid descent into madness.

Originally conceived as a morality tale to warn parents against the dangers of pot-smoking, and recut into what was an early exploitation film, Reefer Madness was the most famous anti-weed flick, but was soon followed by a string of copycats, including Marihuana (also 1936), where an innocent girl winds up pregnant, addicted to heroin, and planning a kidnapping — all because of a single puff of the ‘devil’s herb’. 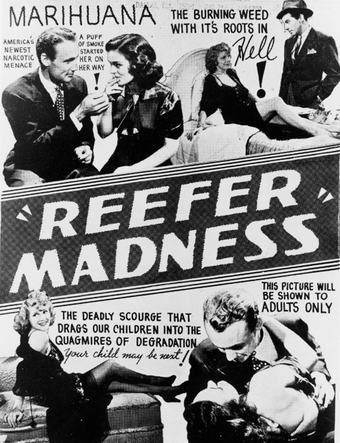 Following a national propaganda campaign against the ‘evil weed’, American Congress passed the Marihuana Tax Act of 1937 — the first time the drug was regulated and taxed by the government. The statute effectively criminalised marijuana, outlawing its possession and sale and restricting it to individuals who paid an excise tax for certain authorised medical and industrial uses.

Decades of marijuana prohibition followed on from there, until the gradual acceptance of cannabis today, which has been heavily influenced by the rapidly expanding body of research supporting the drug’s application as medicine.

Currently, nine US states and the District of Columbia have legalised recreational marijuana use, and medical use is legal in another 30 states. The drug remains illegal on a federal level.

Legal marijuana sales shot to US$9.7 billion in North America in 2017, according to Arcview Market Research and BDS Analytics. That represents a 33% increase over 2016, shattering previous expectations about how quickly the cannabis industry could grow in the face of federal prohibition.

Today, the US reigns in the global legal cannabis market which is expected to reach US$146.4 billion by end of 2025, according to a report by Grand View Research.

Yet while legislation and general cultural perceptions are clearly shifting, the combination of alarmism and salaciousness that underpins ‘reefer madness’ seems to still carry over into the present-day cultural imagination.

While Musk said he was "not a regular smoker of weed", he took a single drag from what Rogan described as a blunt containing tobacco mixed with marijuana — which is legal in California, where the interview was taped.

“You want some of it? You probably can’t because stockholders, right?” asked Rogan. 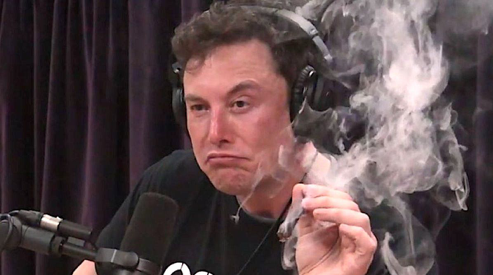 The now-viral interview was immediately followed by two high-profile executive departures at Tesla (NASDAQ:TSLA). In just under 15 seconds of a podcast that topped two-and-a-half hours, Musk seemingly did enough damage to cause Tesla’s stock to temporarily plummet 10%.

Of course, Tesla and Musk have plenty of other problems that have nothing to do with pot. Yet the slew of headlines that followed suggested that cannabis stigma is still alive and well.

My favourite comes from Bloomberg, which ran the headline, ‘The Question for Elon Musk: Dude, What Are You, High?’ That article was republished by the Australian Finance Review with the headline, ‘Elon Musk's decision to smoke pot in public shows he's dazed and confused’.

While pot use has become more normalised in the mainstream than ever before, the daylong selloff and hyped up news stories that came from Musk’s toke-puffing suggest that there’s still a fair way to go in overcoming long-standing stigma and stoner clichés.

A question of double standards

There’s also a side order of corporate hypocrisy and double standards that comes with this stigma.

Tesla reportedly drug tests employees who operate machinery in the factories that build its electric cars. However, it would seem that executives who operate $57 billion companies aren’t subjected to the same restrictions.

Former Tesla employee, Crystal Guardado, said that she was fired last year for testing positive for THC (the compound in the cannabis plant that gets you high). Guardado said that she worked at Tesla's Fremont, California, factory for four months before being dismissed, and called Musk's decision to smoke pot during the podcast a “slap in the face”.

"Elon Musk is just smoking it out in the open, knowing that he uses his very vague drug policy as a way to fire people that are a threat to him," Guardado said.

The single mother told the outlet that her use of doctor-recommended drops could make her test positive for the drug, a condition she says she told the company about prior to her termination.

Guardado said that she believes she was fired for being vocal about safety concerns and for her support of the United Auto Workers union.

Tesla said it hasn’t fired anyone for supporting the UAW organizing efforts. According to the company, Guardado was terminated because she violated the substance abuse and testing policy.

“The issue here is not whether smoking pot is ethical or not,” said Tae Wan Kim, an associate professor of business ethics at the Tepper School of Business at Carnegie Mellon University. “It boils down to the basic assumption whether the CEO, as a trustee of Tesla’s stakeholders, has a duty to be aware of public reactions to his behaviours. As a free person, at least in California, Musk has right to smoke pot wherever he wants. But with his CEO hat on, he should have seen that his reactions would provoke negative impact from Wall Street.”