By Jonathan Jackson. Published at Sep 4, 2019, in Start Your Engines 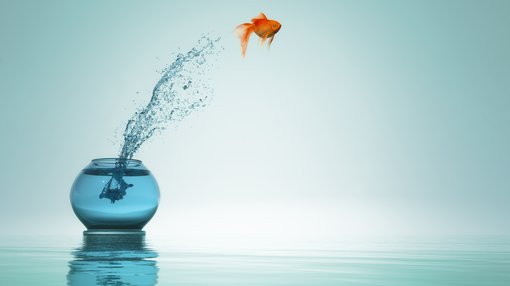 According to LinkedIn the top 25 start-ups for 2019, are the ones that are rapidly growing and recruiting top talent.

Who are the most sought-after start-ups?

Judo Bank topped the list, which consisted of a high number of fin-techs and neo-banks.

Judo is Australia’s first SME-focused challenger bank and recently raised $400 million in what was touted as the biggest single funding round in Australian history.

Having received its its full authorised deposit-taking institution (ADI) licence in April, when it re-branded from Judo Capital to Judo Bank, it is now on track to lend over $1 billion to Australian SMEs by the end of the calendar year.

One of the things that makes it a top place to work is Judo Bank offers the FINSIA program to all employees to ensure they all have the banking fundamentals as a minimum but also offers a Master of Finance to those who wish to progress their learning.

Natalie MacDonald, News Editor at LinkedIn Australia, said “The annual LinkedIn Top Startups list is a reflection of how work is changing, what new industries are emerging and rapidly growing, and where people want to work now, This year’s list has seen 19 new entrants from a variety of industries - highlighting the competitive make-up of Australia’s fast-paced start-ups scene. These startups offer great job opportunities for professionals who are keen to grow their careers fast.”

The full list of LinkedIn’s Top Startups in Australia is below: 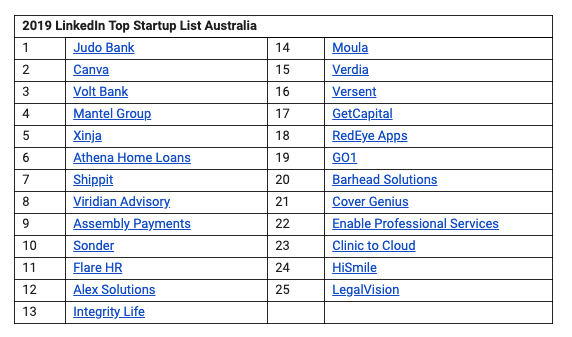 Interestingly, Canva is high on another list as the design company continues to go from strength to strength.

Canva was second behind Judo. It debuted on the AFR rich list in May this year. Here's CEO Melanie Perkins speaking with the AFR recently about her goals and the success of the business.

Another thing that sets Canva apart is its provision of team and personal coaching to its employees with training workshops provided by Canva University and two full-time coaches in Sydney.

Of the other start-ups on LinkedIn's list that are doing things differently, GO1 offers ‘volunteer leave’ – if employees use their annual leave for volunteering, GO1 will cover half of their leave as volunteer leave. Viridian Advisory is owned by its staff and clients — which means all staff have the ability to buy shares in the business. Cover Genius has partnered with Good Return and has launched CG Gives, a social good program that enables team members to become philanthropists and fund charitable contributions. RedEye’s Recharge Days are a core part of supporting the mental health in the workplace. Each team member receives one recharge day every six months each year that is exclusive of their annual leave and sick leave.

The Top Startups list is a part of the LinkedIn List franchise, an ongoing editorial series that celebrates professionals and companies making an impact in the professional world.

To be eligible for the LinkedIn Top Startups list, a company must be independent and privately held, have at least 50 employees in the country, be no more than seven years old, be headquartered in the country on the list which they appear and have a minimum of 15% employee growth over the time period.

LinkedIn evaluated key factors for ranking including interest in the company, employment growth, engagement with employees, job interest and its ability to attract talent from the LinkedIn Top Companies. The timeline measured was July 2018 through June 2019. The list includes rankings for the United States, Canada, United Kingdom, Germany, France, the Netherlands, India, Australia, Japan, China, and Brazil. LinkedIn Lists are fuelled by a combination of exclusive LinkedIn data mapping the professional landscape and an editorial lens from LinkedIn’s global editorial team.