Bringing tech to your laundry: Laundromap readies to list

The company helps time-poor clientele via a smart phone app, picking up laundry directly from their home or workplace and dropping it off within 48 hours — clean, pressed and folded.

Its target customers are high-income earners who need and want their clothes laundered, yet struggle with the traditional system of dropping off and picking up their clothes from traditional “old-school” laundromats within their restricted opening hours.

It offers affordable pricing and lets customers select an available delivery time that suits them, while avoiding the hassle and traffic. Pick up times cater for busy professionals - typically available all week from 7am to 10pm.

The app is available on the Google Play store and the Apple Store. 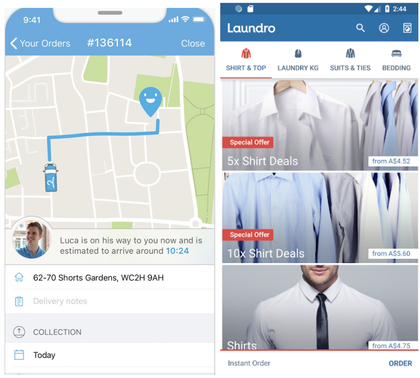 Here’s how it works:

The success of on demand food delivery services, like UberEats and Deliveroo, have successfully disrupted previously tech-static industries with smart apps and the sharing economy. Likewise, Laundromap is meeting an existing need with a game-changing upgrade in convenience and ease of access.

As pointed out by Chairman Rob Levison, the laundry and dry-cleaning sector remains one of the few industries yet to face a technology shake-up.

Launched in Perth and Auckland in 2017, by Sam Macdonald from Auckland's Foster Capital and Perth-based wealth manager Adam Plowman, the startup now operates through a mobile app in those cities plus Sydney, Wellington and Christchurch via a network of traditional retail businesses.

Its technology was obtained under licence from Britain's Laundrapp for exclusive use in Australia and New Zealand and Levison noted that the company will leverage the assets to make better use of them and make them more profitable.

The company also has the support of former All Black Dan Carter as one of its earliest investors, who is one of 70 investors today. Levison reposts that Carter put “cold, hard cash” into the operation and is working to help make the business more visible.

Laundromap is now in the process of expanding nationally by buying a selection of under-used dry-cleaning and laundry businesses in capital cities. It targets high-quality dry-cleaners in high-traffic, expensive areas, and then expand its reach through the customer experience.

The company last year bought a business in Sydney, as well as Perth’s oldest dry-cleaner as part of its expansion. This purchase gives Laundromap a second site in what it hopes will be a national network of dry-cleaners and laundries to support its on-demand business, with Laundromap believed to be in negotiations with further acquisition targets.

Laundromap aims to own between 20 to 30 large bricks and mortar laundry and dry-cleaning companies across Australia and New Zealand.

Management recognised an opportunity to improve productivity and make better use of their plant and machinery, as most of these businesses only operate 30-40% of the time, meaning any “extra volume is super profitable”. There’s no need for more plant and equipment, just need more hours of labour to run the machines.

The plan is to initially acquire a single business in each capital city, and then to tap into smaller cities and regions through an additional affiliate partnership model that will provide it access to a network of separately owned businesses.

The company had last year been eyeing an ASX listing but plans to list on the NZX late in the second quarter via a compliance listing, meaning it will list its existing securities without making a public offer.

Levison commented on the decision, saying "There are a lot of listings every week on the ASX but the NZX had the right size and scale."

Once listed, Laundromap aims to earn (EBITDA) of $3.0 million to $3.5 million and intends to pay ‘a modest dividend’.