Xenith IP poised for a recovery

Speculate aims to target stocks that tend to fly under the radar, perhaps due to the fact that they don’t suit the risk-averse investor, or simply because they are small emerging potentially next big thing stories where the market moving news is yet to break. FinFeed will be looking to uncover such stocks on a weekly basis.

Stocks don’t have to be penny-dreadfuls to be labelled speculative, and in some cases even profitable companies are shunned by risk-averse investors.

In such cases, it is often negative sentiment towards a sector which places downward pressure on the share prices of most stocks in that market segment.

This has been the case with the intellectual property (IP) services sector over the last two years.

It is the smallest of these, XIP that interests me most, mainly because of its attractive valuation relative to its peers.

Of course it remains a speculative stock and investors should seek professional financial advice if considering this stock for their portfolio.

Industry conditions on the improve

When sectors have been out of favour it is quite common for the larger stocks to lead the recovery, with the smaller players that have often fallen off the radar taking longer to respond.

The negative sentiment behind the IP services sector mainly revolved around industry conditions and regulatory changes.

In the last few months, the management of each of the three companies along with analysts that cover the sector have all suggested that the challenges encountered in recent years have abated and that the outlook for the sector is promising.

Just in recent weeks, analysts at both Morgans and Bell Potter said that the IP services markets were continuing to normalise and that the impact of changes in legislation that had affected certain areas had abated.

While the following chart demonstrates the sustained downturn which affected all three stocks between 2016 and 2018, it also shows the recent rebound. 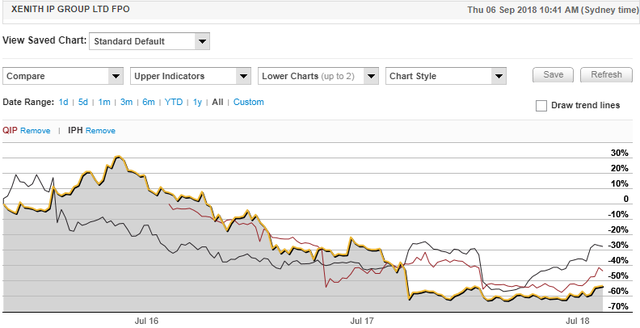 While IPH (black line) and QIP (red) have rallied strongly, there has also been good support for Xenith (yellow).

In the last month the company’s shares have increased nearly 20%, briefly touching $1.40, a level it hasn’t traded at since February. However, the company is still trading well shy of its 12 month high of $1.89, and when one considers that it was trading close to $4.00 just over two years ago, this rally could deliver significant upside. 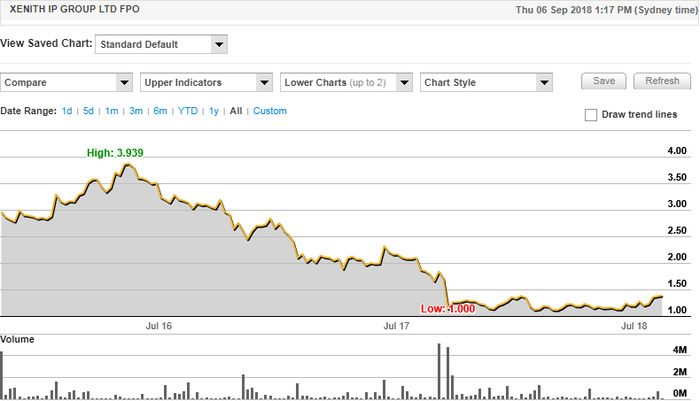 This is particularly the case when you consider the earnings trend over the last three years with EBITDA increasing from $9.2 million in fiscal 2016 to $15.5 million in 2017, leading up to the company announcing underlying fiscal 2018 earnings of $18.1 million last week.

Enterprise Value to EBITDA (EV/EBITDA) is a common means of attributing valuations in these sorts of sectors.

Earlier, I referred to Xenith’s valuation as being one of its compelling attributes, and it is this ratio that undoubtedly stands out in a peer comparison.

This compares with IPH’s and QIP’s multiples of circa 14 and 10 respectively.

Even if Xenith were to trade at the bottom of that range it would imply an enterprise value of circa $180 million, implying a share price of $1.87.

Xenith’s fiscal 2018 result was within management’s guidance which helps in terms of reassuring investors regarding performance predictability, but it also implied robust year-on-year growth of 17%.

On the score of earnings predictability, the following graphic demonstrates the company’s ability to grow across its various operations even in a challenging environment.

The other factor to take into account is that IP management and protection has always been deemed a resilient industry because its revenues are driven by non-discretionary spending.

Enterprises won’t risk millions of dollars of investment in proprietary property and the potential for loss of substantial returns by failing to adopt a robust IP management strategy.

Returning to Xenith’s underlying fiscal 2018 net profit of $10.4 million, it represented earnings per share of 11.7 cents which implies a PE multiple of 11.8 relative to the company’s current share price.

Given that the group is forecast to generate compound annual earnings per share growth of circa 15% over the next three years, its PE would appear conservative.

If one applied a PE multiple of 15 relative to consensus forecasts for fiscal 2019, the company’s shares would be trading in the vicinity of $2.20.

Analysts at Bell Potter are forecasting a dividend of 9 cents per share in fiscal 2019, implying a yield of 6.5%. The broker anticipates that a combination of benefits from cost restructuring and an improved performance from one of its acquired businesses, along with a broader industry recovery will result in strong earnings growth in 2019.

Bell Potter is forecasting revenues of $129 million and a net profit of $12.7 million in fiscal 2019, representing earnings per share of 14.3 cents, implying a forward PE multiple of less than 10.

Xenith has its eye on Asia

In an industry that has undergone recent swift consolidation, Xenith IP is now well placed to further build its presence in the Australian and Asian markets, as well as pursuing opportunities which would deliver sustained growth.

Analysts are in accord with companies operating in the sector in identifying Asia as a key growth market.

Xenith has made substantial progress in developing the firm’s Asian growth strategy, which encompasses both traditional IP services and the extended complementary service lines associated with its Glasshouse Advisory business.

Management is actively exploring both near and medium-term strategic options across the region, with discussions at various stages.

On this note, Bell Potter analyst Sam Haddad said, “We believe XIP will likely look to pursue expansion into South East Asia with the aim of providing a one-stop shop IP service offer for the Asia-Pacific region.”

Also, don’t be surprised if yield seekers target the stock.

Even if the company’s share price fell in line with the $1.87 EV/EBITDA based valuation that we extrapolated earlier, this would still imply a dividend yield of circa 4.8%.

Xenith’s dividends to date have been 100% franked, and assuming that would be the case in 2019, the grossed up yield would be approximately 6.9%.

This is an attractive return in a low interest rate environment.