Aeon Metals Ltd’s (ASX:AML) resource upgrade at its Walford Creek Copper-Cobalt Project in North Queensland was a watershed event for the company, and one which arguably should have drawn a more significant share price response.

However, given Aeon has such a large resource in the high confidence measured and indicated category, the chances of further success in upcoming drilling and the completion of an impressive feasibility study in 2019 will see the company’s shares move towards broker consensus targets of approximately 60 cents.

One analyst went as far as to say that Walford Creek was emerging as one of Australia’s largest and highest grade undeveloped copper projects.

As a backdrop, in January 2018 the company released results of an updated Independent Resource Estimate.

The updated estimates had two components, namely a Copper Lode Resource and a Cobalt Peripheral Resource.

The following shows the relationship between the high grade copper core and the surrounding peripheral cobalt mineralisation. 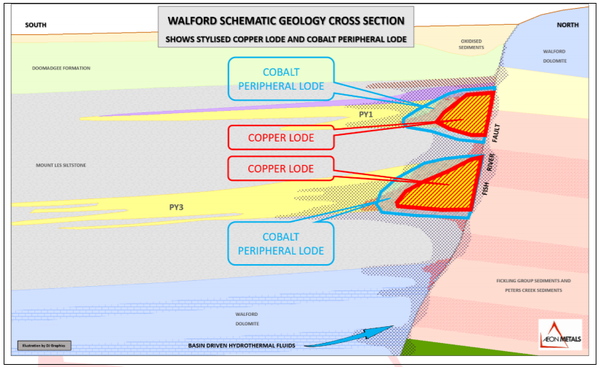 The resource upgrade also included a maiden resource and exploration target for the Amy Zone, the 5.7 kilometre strike extension of the previous resource.

Feasibility study the next catalyst

David Coates from Bell Potter estimates that the establishment of ore reserve tonnages required for a feasibility study mine plan would imply a potential mine life of 18 years at 1.5 million tonnes per annum.

He rates the potential for achieving this target as ‘high’ given a 1.8 million tonnes inferred resource has already been defined across four points in the Amy Zone, as well as taking into account the demonstrated predictability and consistency of the current Copper Lode Zone.

Taking these factors into account Coates said, “This points to Walford Creek emerging as one of Australia’s largest and highest grade undeveloped copper projects.”

“Exploration of this area will be the focus of our 2019 drilling effort.

“The significant increases in the Measured and Indicated tonnages (which are the required basis for Ore Reserve estimates for development and mining) will enable Aeon to complete a feasibility study during 2019 for a project with a mine life of at least 10 to 15 years with the capability for modular expansion, if and when the Mineral Resource base is increased.”

Coates’ confidence that Aeon will be able to bring the project into production has been lifted significantly, resulting in him increasing his valuation (albeit speculative) from 53 cents per share to 58 cents per share, implying upside of more than 100% to Monday’s closing price of 27.5 cents.

Bear in mind that share price momentum could be driven by drilling leading up to the establishment of reserves and the completion of a feasibility study, particularly given the high level of confidence provided by the large tonnages in the measured and indicated resource estimates.

It is worth noting that drilling results returned between March and May last year resulted in the company’s shares nearly doubling from 24 cents to a high of 45 cents.