Cellnet provides a healthy mix of growth and resilience

Given the large sell-off in tech stocks, we felt that the tech sector could be a good one to target this week.

Cellnet (ASX:CLT) is the stock in question, and it looks appealing to investors targeting value stocks in a sector that's bound to rebound — it's just a matter of when.

Granted, there have been some credible reasons for scepticism towards the tech sector, but it's never a one-size-fits-all situation, and these are times when good stocks can be picked up at cheap.

The sell-off that occurred in Australia was largely driven by overseas events as the NASDAQ slipped from last week’s close of around 7270 points to hit a mid-week low of approximately 6800 points.

However, there have been other factors at play in recent months which have seen the S&P/ASX 200 Information Technology index (XIJ) fall from the 17-year high of 1273 points struck towards the end of August to a low of 1036 points on Wednesday.

They say every picture tells a story, and the following 12 month chart of the XIJ overlaid with the NASDAQ 100 tells it all —the good and the bad. 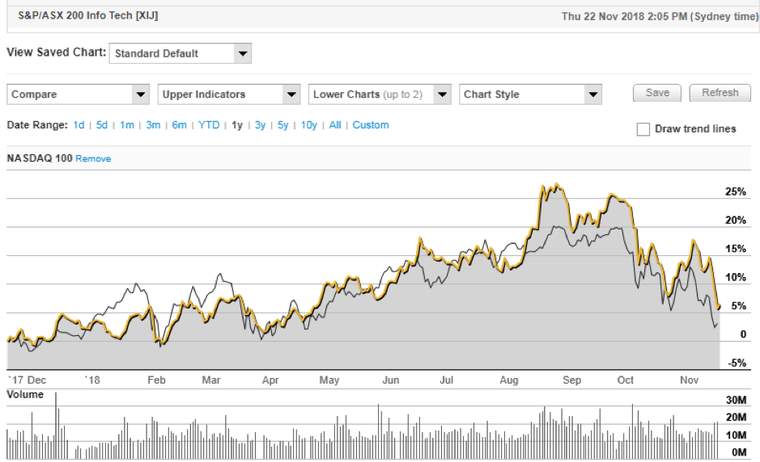 The fact that both indices tend to move in step is no surprise, particularly given some of our larger tech stocks generate substantial earnings from overseas markets.

However, the area of interest is the month of August when the XIJ increased from 1112 points to notch up that 17 year high of 1273 points on August 24. It is important to note that this level was maintained for the rest of August, which marked the end of reporting season for most companies.

The surge in the index in August was outstanding, increasing by about 15% in the space of the month.

This indicates that Australian IT stocks performed extremely well in 2018, and what’s more, provided positive outlook statements for the coming year.

For the best part, nothing has changed since then except for global events which, as can be seen from the chart, included a significant sell-off of NASDAQ-listed tech stocks in the US, and of course the October market rout that affected all global equities markets.

The chart clearly shows that our tech stocks are being dragged down by negative sentiment towards overseas tech stocks which, for the best part, are coming off unsustainably higher trading multiples than their Australian peers, courtesy of the hype driven equities climate that has prevailed over the last three years.

The fact that the NASDAQ nearly doubled from about 4300 points to 8100 points in the space of three years tells the story.

Take a look at the following NASDAQ chart and you will see that the steepness of the most recent run is akin to the late 1990s prior to the tech crash.

This isn’t suggesting that we're in for another tech meltdown, as the high-flying stocks of today generally have sound business models, material earnings and tangible growth prospects to match.

However, it does illustrate in comparative trend terms that the NASDAQ ran too hard, too fast.

But if you think that Australian tech stocks deserve to be sold off because they too have also run too hard, the following 10-year chart suggests that they have had a much more measured increase compared to the NASDAQ. 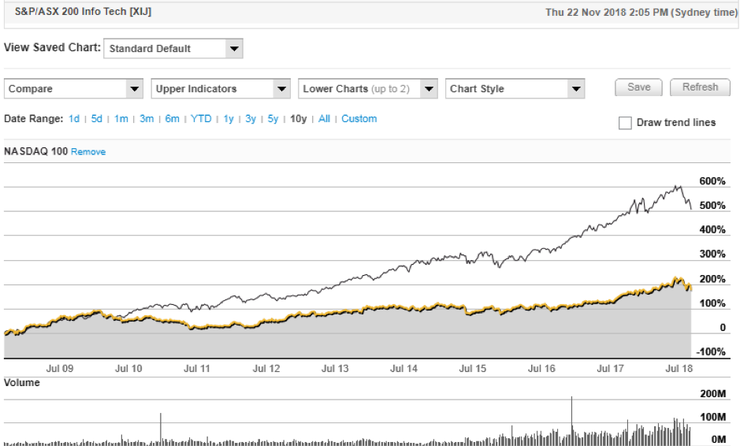 This is a reasonable indication that Australia’s tech companies shouldn’t experience a boom/bust situation, should such an event occur in the US.

There was some good news on a company level last week, with S&P/ASX 200 tech stock, Appen (ASX:APX), for one, forecasting a profit upgrade for the current financial year.

Larger companies such as Computershare (ASX:CPU) indicated that it's business as usual, completing the acquisition of Equatex earlier in the month.

CPU has been sold down substantially in the last two months, despite consensus earnings forecasts being increased, and its sub-20 2019 PE multiple suggesting it may be buy time.

This further demonstrates the emergence of value in a sector that is arguably being unjustifiably sold off.

So, if you are feeling a little more comfortable about the tech sector, it's worth examining the small cap, Cellnet Group Ltd (ASX:CLT), a market leader in information and communications technology distribution, warehousing and logistics, with centres in Australia, New Zealand and China.

For those looking to steer clear of global volatility, it is reassuring to know that Cellnet generates the majority of its revenues from its Australian operations.

Furthermore, the company distributes bread and butter type tech items that tend to remain resilient, even when consumer spending wanes.

While the company has a modest market capitalisation of $25 million, Cellnet is a market leader in its field.

The company distributes and markets products on behalf of a number of the world’s leading vendors, and in doing so, has prominent positions in the business, corporate and online retail environments.

The company is constantly implementing new initiatives and offers incentives to stay competitive and maintain its relationships with a blue-chip client base that spans both the tech and telecommunications industries.

Cellnet has a demonstrated record of not only keeping up with new technologies, but has also developed its own in-house products that appeal to a range of consumer, retail and corporate customers.

As a distributor of accessories and complementary products for virtually every area of consumer and business IT hardware, Cellnet is addressing a mass market.

Through its own brands and leading global manufacturers, Cellnet distributes products such as cases for smart phones, tablets and smart watches as well as screen protectors.

In the area of connectivity, the company distributes data, audio and charging adapters as well as power supply for home and car. Headphones, speakers and Bluetooth products are another important revenue driver.

Cellnet has increased its offering in the gaming market with the recent acquisition of Turn Left, and it now has a prominent position in supplying gaming accessories such as controllers, headphones, PCs, consoles and apps.

The company has also tapped into relatively new innovative markets such as video and IoT devices and home automation.

There are a few things these items have in common, and they all work in favour of Cellnet.

Most of the products are high-turnover items as they require frequent replacement through normal wear and tear, as well as being lost and/or damaged.

They are constantly being made obsolete, either by the emergence of new technologies that aren’t complementary, or simply by the arrival of the next best thing.

These products are generally not high-priced items that deter consumers from upgrading — as such, Cellnet has a volume-driven business model rather than one that is reliant on one-off contracts that tend to create lumpy earnings patterns.

The numbers do the talking

During the year, Cellnet launched 1240 new products, signed up 750 new customers, and more than 170,000 orders were placed and shipped worldwide.

The company supplies most of the major telcos and is an exclusive supplier to Optus and Vodafone.

Cellnet has a wide range of products that the group distributes under its internal brands, and the income generated from these sales offers superior margins than those achieved through supplying third-party products.

Here is a snapshot of some of the company’s own brand products.

And these are the names of the retail world that Cellnet distributes to:

Sourcing from a broad range of manufacturers and having a well-recognised, extensive stable of own brand products and multiple client distribution points means that Cellnet is not beholden to any one manufacturer or point of sale.

Consequently, the company offers defensive qualities, should situations arise where there are issues with third parties.

The company’s financial metrics are shown below, but with the impact of acquisitions, as well as organic growth, it wouldn’t be surprising to see an accelerated level of growth in fiscal 2019 and beyond.

Though management hasn’t provided earnings guidance for fiscal 2019, there is an expectation that Turn Left has the capacity to generate annualised underlying earnings of approximately $2 million. As indicated in the table below, when compared with fiscal 2018 underlying earnings, this would provide a substantial boost in fiscal 2019.

My back of the envelope earnings estimates for fiscal 2019 suggests that the company is trading on a single digit PE multiple.

However, even based on the group’s fiscal 2018 underlying earnings per share, the current share price implies a PE multiple of 7.1 which seems conservative, given Cellnet’s growth potential.