Unfortunately for the company, the DFS was released as global equity markets were in freefall, arguably muting the response to what was an impressive set of numbers pointing to the commercial viability of the project.

On this note, Hartleys’ resource analyst, Paul Howard, recently described Venturex as ‘severely undervalued’, and his price target of 42 cents was well ahead of the company’s 16.5 cent share price.

Steuart McIntyre from Blue Ocean Equities is even more bullish on the stock. Following the release of the DFS, he initiated coverage of the company with a buy recommendation and a price target of 60 cents.

Commenting on the underlying metrics of the project McIntyre said, “With a post-tax NPV of approximately $310 million at spot prices versus a market capitalisation of only $40 million, it’s safe to say we sees substantial upside potential for Venturex’s share price.

“Our forecasts assume the copper price recovers from US$2.87 per pound to US$3.20 per pound over the next 12 months, yielding a higher post-tax NPV of $393 million.”

He went on to emphasise that Sulphur Springs’ key advantage is its superior copper equivalent grade of approximately 3%. 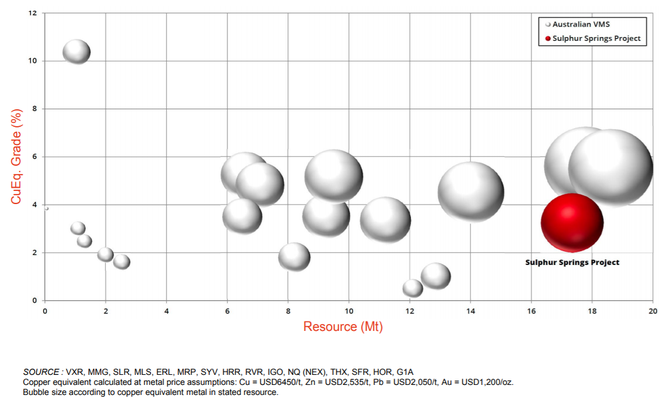 In production by fiscal 2020

Sulphur Springs is Venturex’s flagship project and the company has made excellent progress during the exploration stages, establishing a sizeable resource to use as a base for the DFS.

Not only has this assisted the company in establishing a sizeable resource, but it has also positioned it to move to production relatively quickly with analysts projecting maiden production in fiscal 2020. 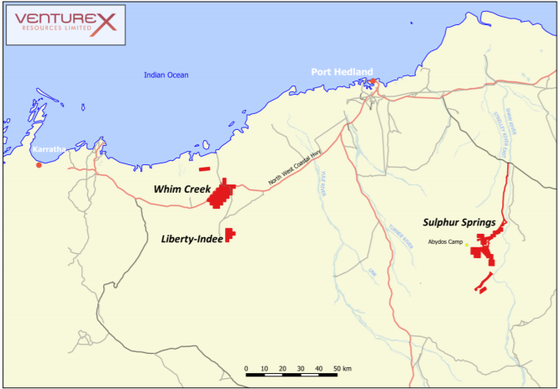 However, the main game for Venturex is the Sulphur Springs project and with the DFS now completed, the next logical step is organising project funding to commence development.

On this note it wouldn’t be surprising to see major shareholder Northern Star Resources (ASX:NST) assist in the initial funding which is estimated to be $160 million.

While Northern Star’s core operations are focused on gold, it has been an active supporter of the Sulphur Springs project.

Not only does the company have a stake of approximately 20% in Venturex, as recently as September it advanced a $2 million unsecured loan to assist in completing the DFS.

Northern Star could even see Venturex as an opportunity to diversify its business by gaining some exposure to base metals through a takeover.

Features of the DFS

In conjunction with the release of the DFS, Venturex advised the market that there had been a 42% increase in contained copper metal compared with the previous estimate in 2016. This translated into an increased Ore Reserve of 8.5 million tonnes, at 1.4% copper and 3.1% zinc.

The DFS confirmed that Sulphur Springs has the potential to be a profitable base metal mine with low cash operating costs, strong margins and robust economic returns.

The project is forecast to generate life-of-mine (LOM) revenue of $2.62 billion and LOM project free cash flow of more than $800 million over an estimated 12-year mine life which includes construction.

The Sulphur Springs development will also provide a strong foundation for Venturex’s long-term growth strategy in the base metals sector, with the cash-flow generated to be utilised in progressing a major exploration program along the 27 kilometre long, under-explored Panorama Volcanogenic Massive Sulphide (VMS) trend.

The key metrics of the DFS are outlined below.

The project economics represented a significant improvement on a Value Engineering Study (VES) which was completed in 2017.

This is important as it could be argued that those who missed the DFS release due to unsaddled market conditions may not be aware that the metrics contained in the DFS are far more compelling than those in the VES.

The updated supergene resource has enabled Venturex to optimise the proposed open pit mine schedule to support an increased production rate of 1.25 million tonnes per annum (compared with 1Mtpa in previous studies), adding financial value to the life-of-mine schedule.

Optimisation of the underground mine design has also been completed, with recent work indicating that this can also accommodate a significantly higher production rate.

Metallurgical test work undertaken during the year on transitional and supergene ores delivered outstanding results, confirming the amenability of each of these ore types to processing using a conventional copper and zinc flotation circuit.

The test work delivered transitional copper concentrate grades of up to 26.8% and recoveries up to 91.7%, highlighting the strong upfront cash-flow that will be generated by the initial open pit operation.

Together with a review of the historical metallurgical test work, the results show that the Sulphur Springs Project will produce high-grade, high-quality zinc and copper concentrates with outstanding overall recoveries.

Having ticked all the boxes to date, including delivering an impressive DFS, these are the milestones to be mindful of once finance is completed, which could well be a share price catalyst on its own right. 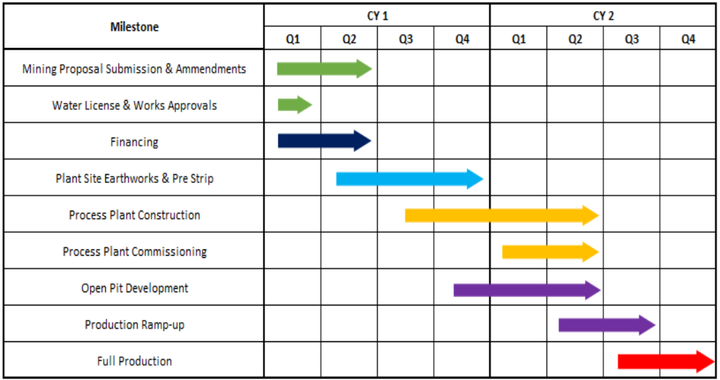 This would tend to rule out the likelihood of a highly earnings per share (EPS) dilutive capital raising, and given that the project will be generating substantial cash flow at a relatively early stage, using a significant proportion of debt funding wouldn’t surprise.

Bearing this in mind, analysts at Hartleys may not be far off the mark with their modelling.

The broker crunched the numbers on the basis of about $89 million in debt funding for the Sulphur Springs capex requirement, 50% of what it estimates for total pre-production capital, including a contingency for working capital.

Hartleys expects approximately 50% of the capital expenditure requirement will be funded through equity.

This would involve a capital raising to fund development in fiscal 2019. The broker assumes Venturex raises $79 million in placements at an average price of 24 cents over the next 12 months.

This would necessitate the issue of 360 million shares, which while EPS dilutive still implies attractive fundamentals based on profit projections beyond 2020.

Hartleys is forecasting a profit before abnormal items in fiscal 2020 of $10 million.

The first year of full production should be fiscal 2021 and Hartleys is forecasting a net profit before abnormal items of $79.8 million, implying earnings per share of 13.3 cents based on issued capital of 607 million shares, including the 360 million shares that the broker expects to be issued as part of the capital raising.

Based on these metrics, Venturex is trading on a 2021 price-earnings (PE) multiple of 1.4, strengthening the case that it is undervalued at current levels.

Shareholders would welcome a bounce in the share price in terms of a potential capital gain, but arguably of more importance is the fact that it may position the company to raise capital at a higher price than Hartleys’ projections of 24 cents per share, resulting in less earnings dilution.