The term 'Doctor Copper', which is commonly used by analysts and market commentators, unfortunately doesn’t relate to metal's healing powers. However, a panacea for recent volatility in equity markets and commodity prices would be certainly welcomed.

Doctor Copper refers to the commodity’s historical reflection of economic health, with the metal often seen as a forward indicator of global economic conditions — a thermometer, in very basic terms.

As copper has applications in the production of a wide range of products from motor vehicles to electronic devices and construction equipment, an uptick in demand for the metal and the associated commodity price movements have often gone hand-in-hand with rallies in equity markets and support for other commodities, particularly base metals.

Between 2016 and 2017, the mercury was rising with copper prices stacking on 60% and moving in tandem with the Dow Jones index as it rallied 65%.

However, the metal was sold down heavily in the first half of 2018 prior to a rally in September, and the levels achieved at this time have been sustained. This is a good sign, given that they could well have been buffeted by negative sentiment regarding the impact trade tariffs could have on large manufacturing economies such as China. 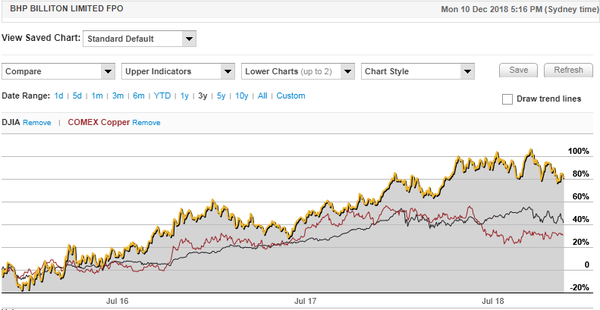 Another key metal in the manufacturing process is nickel, and it rallied to a similar degree in September, and, for the best part, has maintained those levels through to December.

While zinc and lead haven’t responded, they are often laggards — don’t be surprised if they have their rally over the next few months, particularly as markets become more active in the new year.

With the potential for further commodity price upside on the copper front, Speculate has run the ruler across a company that one broker indicated in late November could be "the next mid-tier copper producer on the ASX".

Aeris has assets and cash to move to mid-tier producer

The company in question is Aeris Resources (ASX:AIS), and one of its attractions is that it already has well-established producing mines that are generating cash, while also having a majority stake in a highly prospective tenement in the iron oxide copper gold (IOCG) corridor of South Australia.

This region is host to some of the world’s largest and most economical copper-gold mines, with well-known projects such as Olympic Dam, Prominent Hill and Carrapateena operated by top-tier miners, BHP Group (ASX:BHP), and Oz Minerals (ASX:OZL).

Aeris has a 70% interest and is the manager of the Torrens project through its JV with Argonaut Resources (ASX:ARE). 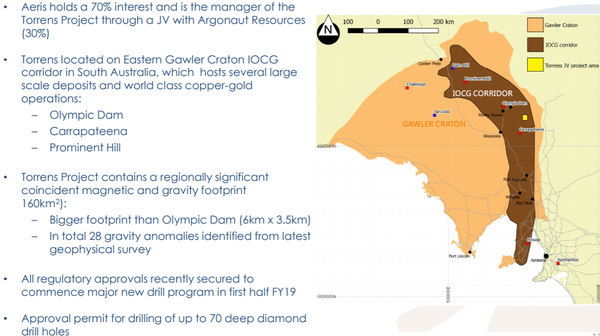 Some recent promising drilling results released by BHP in late November following exploration in that area triggered some substantial share price moves from smaller miners that have the potential for similar exploration success in the IOCG corridor.

One of the big movers in percentage terms was Strategic Energy Resources (ASX:SER) with its shares up more than 200% at one stage due to its highly prospective tenements which are surrounded by Fortescue Metals Group’s (ASX:FMG) large land holdings.

The spike of more than 50% in Aeris’s share price demonstrated investor recognition of its ability to benefit from this development.

Smaller players in the area could see the value of their territory increase substantially due to drilling results that are released from other nearby projects, even without spending a cent on exploration.

As asset values increase, share prices normally move in tandem and at times they reflect a premium, particularly if there is the prospect of a takeover by one of the big players.

This could be the case with either SER or AIS, but today we will examine the latter’s business as its tenements lie only 45 kilometres from BHP’s latest find.

Firstly, though, some insights into the war of words between US and China regarding the imposition of trade tariffs and a broader range of other issues, as this seems to have put a dampener on resource stocks...

The US will halt any new tariffs for 90 days as the two countries continue negotiations on a wide range of issues.

As Lau highlighted, the talk paved the way for more constructive negotiations in the coming 90 days — there is hence a high likelihood of reaching an ultimate agreement on various issues.

She noted that the offshore RMB currency rebounded by 500 points to trade at 6.90 per dollar.

As the US will not add extra trade tariffs on Chinese exports from January 1, 2019, the near-term downside risks to exports has been removed.

Lau believes this will help China’s economy to stabilise through the weak winter season, perhaps signalling in her mind that the worst has passed.

In terms of potential impacts on commodity prices, Lau said: “Against this backdrop, commodities and related stocks are set to rebound going forward.

“Copper, which has been battered by an uncertain economic outlook, may outperform all base metals and other hard commodities.

“Fundamentally, the news that Chile’s mine output declined in October of 2018, down 3% year-on-year is a positive, pointing to a good chance of market rebalancing with lower than expected supply. Chile’s copper mine output is approximately 30% of the global total.”

Aeris’s flagship Tritton copper project in New South Wales has produced upwards of about 24,000 tonnes of copper in seven out of the last eight years, with production in 2015 and 2016 exceeding 30,000 tonnes.

While this has generated strong cash flow, there have also been development costs that have placed a drag on the company’s balance sheet.

However, following a $35.1 million equity raising in September this year, the company has cash of approximately $25 million and a very manageable debt position.

Consequently, it is well-positioned to develop new mines adjacent to Tritton, as well as investing in exploration at projects such as Torrens.

Setting Torrens aside for the moment, analysts at Bell Potter are forecasting Aeris to generate EBITDA of $53 million from revenues of $223 million in fiscal 2019.

These metrics are based on a copper price of US$3.06 per pound, which appears reasonable given that the price has fluctuated between about US$2.60 and US$3.30 over the last 12 months, and is currently hovering in the vicinity of US$2.80 per pound.

As a means of comparison, one of Australia’s most prominent monitors and forecasters of metals prices, PCF Capital, just last week released its forecasts out to 2020 for a broad range of commodities — charted below are its key base metal projections. 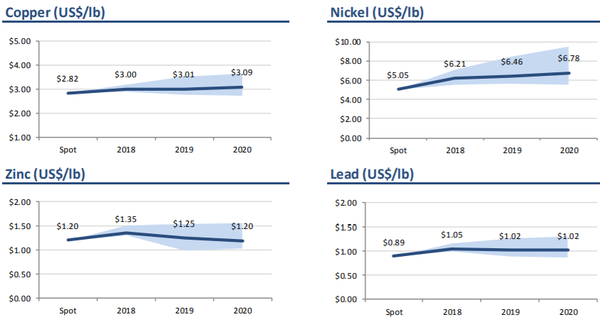 The combined ore production from both mines is treated at the 1.8 million tonnes per annum Tritton ore processing plant.

There are four additional mine projects scheduled for future production, which together with Tritton and Murrawombie form the current life of mine plan (LOM).

These projects will supplement and then replace production from Tritton and Murrawombie as the latter are exhausted.

Exact timing for the additional mine projects is dependent on the success of exploration in extending the life of existing mines and finding new deposits in the region.

The current LOM is supported by ore reserves and extension of the mineral Resource is possible at all of the deposits scheduled in the LOM, as they all remain open at depth.

Aeris is confident that drilling will grow these known deposits and that mine life will be progressively extended.

Exploration success in finding new deposits in this highly prospective region could increase production rates and/or significantly increase the life of the operation.

The significant capital program for the year has predominantly been focused on continuing to develop Murrawombie as it ramps up to full production levels.

Kurrajong could be game changer

While Tritton and Murrawombie are extremely important in terms of keeping the coffers ticking over, when it comes to identifying substantial share price catalysts, most analysts are focused on exploration at Kurrajong, where the company has had plenty of success — the drill bit has identified wide sections of copper, which are of a higher grade than that currently being processed. 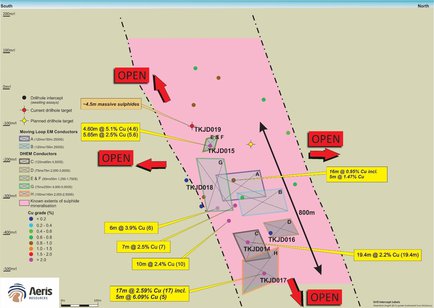 "Kurrajong remains one of AIS’s key targets at Tritton and will be the focus of a planned follow-up drill program of 12 holes, likely in fiscal 2019.”

Indeed, undertaking second phase drilling at Kurrajong in fiscal 2019 has been confirmed by management, and this, along with the collection of electromagnetic data over the remainder of the northern half of the tenement package, will be a key focus.

Likewise, in terms of identifying market moving news, further high-grade drill hits at Kurrajong are shaping up as the most significant share price catalyst in the first half of 2019.

This was backed up by Andrew Clayton at Euroz, who said: “Kurrajong continues to shape up nicely with high grade mineralisation extended over 800 metres down dip.

“The grade compares favourably with the current Tritton reserve grade of 1.5% copper, providing Euroz with a reasonable amount of confidence that Kurrajong has the potential to provide a resource of between 2 million tonnes and 4 million tonnes at a grade of between 1.5% and 2% copper.”

Based on this scenario, Clayton said: “We have increased our nominal exploration valuation from $20 million to $30 million to incorporate the continued exploration success which has seen our total valuation increase to 33 cents per share and we maintain our Buy recommendation”.