Taxes are rising faster than wages

About ten minutes after I hit send on yesterday’s morning comment, the British Parliament voted by 329 to 302 to wrest control of the “Brexit” process from May’s government.

One can only imagine this will make the whole process much worse than it already is, although it is hard to imagine how.

With regard to market news, I suspect I wasn’t the only one surprised yesterday to read that Wesfarmers (ASX:WES) had lobbed a $1.5 billion bid for Lynas (ASX:LYC). Wesfarmers is apparently seeking to gear up into the increasing demand for electric vehicles and wind turbines which need a fair bit of neodymium and praseodymium in their makeup.

Dr Lucy Ellis of the Reserve Bank told her audience yesterday that households will cut back further on discretionary spending in response to slow income growth and falling house prices. She went on to say that over the past year personal taxes had increased at twice the rate of household incomes. The following chart shows this clearly. 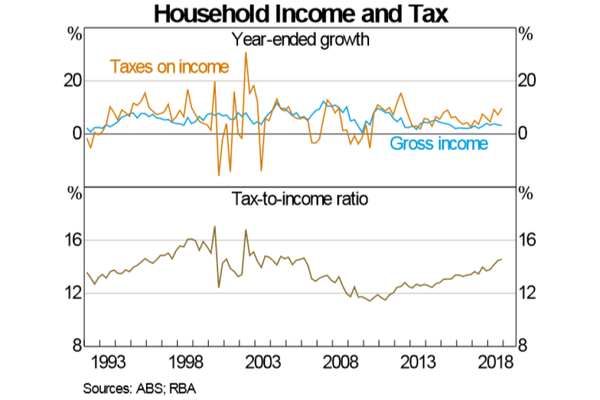 It was a quiet yet positive night on overseas bourses, with most indices closing in the black and bonds pretty steady. Oil was the big mover closing up 2.1% at US$60.04. The Australian Dollar is trading higher at US$0.7134 and index futures are up by 10 points.