European markets have had a more muted open after yesterday’s rally as some earnings reports came up short.

Royal Dutch Shell (AMS: RDSA) slashed its dividend for the first time since the Second World War. It now stands at $0.16 down from $0.47 per share, a decrease of 67%. After announcing profits had almost halved year on year, its shares are propping up the FTSE100 index this morning as uncertainty for the oil market continues to put pressure on the sector. The UK’s second largest supermarket Sainsbury’s is down over 4% after highlighting that the surge in grocery sales it has seen will likely be offset by losses in other areas, such as fuel and clothing. 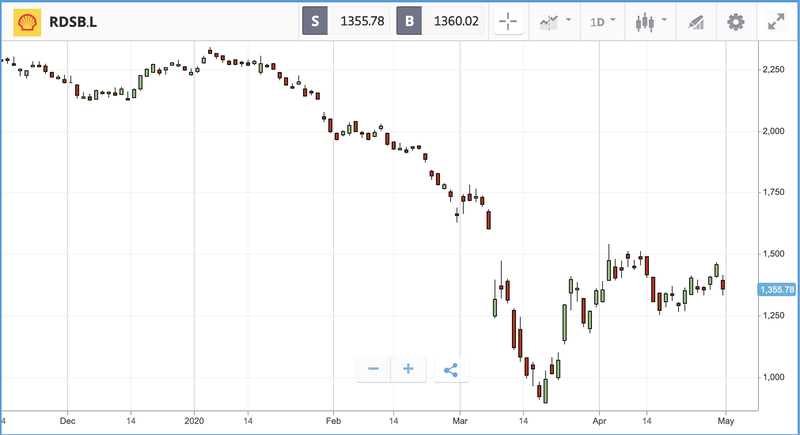 On Wednesday, the Bureau of Economic Analysis reported that US GDP contracted by 4.8% in the first three months of 2020, more than the 3.5% predicted by economists surveyed by Dow Jones. That is the biggest GDP contraction since the depths of the financial crisis in 2008, and is the first holistic look at the impact that the coronavirus pandemic has had on the US economy.

Consumer spending, which is two thirds of total GDP, sank by close to 8% during the quarter due to store closures, while spending on durable goods — items that last a long period of time, such as a washing machine — fell 16.1%.

The damage in Q1 is likely to be nothing on what is to come in Q2, as the US lockdown began to take effect in mid-March, meaning only a handful of weeks of economic shutdown are included in the Q1 figures. Although there are a few gradual reopenings beginning in certain states, the US economy is likely to be effectively shut down for much of the second quarter.

In earnings news, investors took a favourable view of Facebook’s (NASDAQ:FB) results, sending the stock soaring by close to 10% in late trading after it had already gained 6.2% during market hours. Facebook is heavily dependent on advertising revenue, and while CFO David Wehney cautioned that it saw a “broad-based pullback” in advertising on its platform, he added that “we have seen signs of stability reflected in the first three weeks of April.” Facebook still managed to double its Q1 profits year-over-year, delivering $4.9BN from revenues of $17.7BN.

Tesla (NASDAQ:TSLA) also posted a 10% surge in late trading after unveiling its Q1 numbers, in which it managed to deliver a small profit despite facing manufacturing shutdowns due to the coronavirus pandemic. Corporate news was not all rosy yesterday, as Boeing announced it plans to cut 15,000 jobs, amounting to 10% of its global workforce.

Overall, US markets enjoyed a significant rally on Wednesday, with the S&P 500 gaining 2.7%. Notably, the Nasdaq Composite is now less than one percentage point away from being back to where it started 2020. The Nasdaq was led higher by 8% plus gains from Micron, Marriott, Alphabet (Google’s parent) and Align Technology.

London-listed stocks also soared yesterday, with the FTSE 100 jumping 2.6%, taking its gain over the past month to 12.1% and taking the index out of bear market territory. Eight stocks in the FTSE posted a daily gain of more than 10%, including Carnival, Barclays, easyJet and Standard Chartered. Only two stocks in the index lost more than 1% on Wednesday, with one of those being Ocado Group, which fell 1.6%. The grocery delivery service has soared more than 20% over the past month, driven by shoppers turning to online options. In other news, an industry body reported that the British car industry saw production in March cut by a third — the sector employs more than 800,000 people in the UK. The FTSE 250, which rose 3.3% on Wednesday, was led by double digit gains from Provident Financial, Virgin Money UK, property developer Hammerson and airline Tui.

Apple (NASDAQ:AAPL): Apple stock has outperformed the broader market this year, and is close to breakeven in 2020 so far, despite delaying mass production of its 2020 flagship products for a month and warning back in February that its revenues would be hit by the coronavirus pandemic. Investors will be watching for how supply chain and production bottlenecks caused by the lockdown in China and consumer demand during the pandemic have impacted sales, plus early numbers from China since its economy has reopened. There is also likely to be significant interest in early sales figures from the recently launched iPhone SE, as the lower priced smartphone segment could be key for Apple in a post-pandemic economy. Wall Street analyst expectations for Apple’s Q1 earnings have fallen from a $0.77 earnings per share figure three months ago to $0.36 now.

Amazon (NASDAQ:AMZN): Amazon has been one of the big winners of the pandemic, hoovering up consumer demand from shut bricks and mortar physical retailers, and its share price is up 28.4% year-to-date as a result. Investors will be watching for details of how the increased demand has translated into revenues and fed through to Amazon’s bottom line and bottlenecks that have hampered those efforts. Crucially, analysts are likely to probe the firm on how much of the current heightened demand for its services — such as grocery delivery — it expects to stick for the long-term once day-to-day life returns to normal after the pandemic. Arguably the longer this crisis runs, the better it is for Amazon, as consumers will get used to using its services as a default. Analyst expectations for Amazon’s earnings have ticked up over the past few months, and analysts overwhelmingly favour a buy rating on the stock.

Gilead Sciences: Biotech firm Gilead Sciences reports its Q1 2020 earnings on Thursday. The company has found itself on the front lines of efforts to treat the Covid-19 virus, and on Wednesday announced the results of a new trial of the drug remdesivir, showing evidence that the drug may help patients recover from the disease. The US Food and Drug Administration is reportedly in talks with the firm about making the drug available to patients. Investors will be interested in the potential commercial implications for Gilead, but there will also be plenty else on the agenda. The firm has struggled to deliver consistent growth across some of its product lines, and recently lost a patent infringement suit that could cost it over $1bn. Gilead missed earnings estimates last quarter.

Bitcoin surged yesterday as the halving event approached, starting the day below $8000 before smashing through $9000 in early trading today. The significant halving event is now just 12 days away. The surge strongly suggests the fear of missing out is driving the price higher alongside a wider stock market surge.

While Bitcoin was up over 18%, other cryptoassets performed strongly in its wake. Ethereum was up by more than 11% while XRP was up by 9%.

All data, figures & charts are valid as of 30/04/2020. All trading carries risk. Only risk capital you can afford to lose.