The FTSE remains down following the UK government announcing further stricter regional lockdown measures, this time in the Greater Manchester. Interestingly there are some bright spots in some of the most beleaguered sectors such as financials, industrials and travel as the US inches closer to agreeing a fiscal stimulus package. Standard Chartered topped the FTSE up 2.5%, Rolls Royce and International Consolidated Airlines were up 1.5% each.

Meanwhile President Trump indicated he was willing to accept a higher value aid package than previously stated, going against his own Republican party stance, nevertheless it has left investors cautiously optimistic that a deal could be making progress. 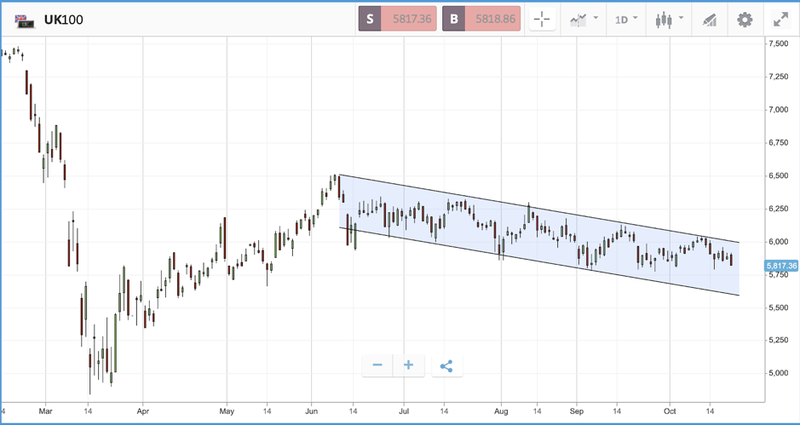 There were two major pieces of regulatory news affecting giant US firms on Wednesday.

First up, the Justice Department has filed an antitrust lawsuit against Google, which alleges that the division of parent firm Alphabet has misused its power in an anticompetitive way.

At the centre of the suit is a deal Google has with Apple to make it the default search engine on the company’s browser, which means Apple device users are served up Google search results and advertising. Investors do not appear to be taking the suit as a significant threat to Alphabet or Apple, both of which closed out Tuesday more than 1% higher.

Elsewhere, it was reported that Goldman Sachs will pay $2.8bn and admit wrongdoing to put an end to a Justice Department bribery inquiry tied to the firm’s work for a corrupt Malaysian government fund. Again, Goldman stock rose following the announcement, as the company has been setting aside money to pay the expected fine.

After hours Netflix also tumbled more than 6% following its earnings report, which missed expectations on both subscriber additions and profits. Netflix has previously been one of the standout winners this year, up by more than two-thirds from its low point in March.

All three major US stock indices had a positive day on Wednesday, with the financial stocks enjoying the biggest gain of the S&P 500’s 11 sectors. In the top 10 S&P 500 stocks for the day, oil names Apache and National Oilwell Varco enjoyed 5% plus gains, but the index was led by General Motors which climbed 6.8% and continued climbing in after-hours trading. GM’s gain came on the back of news that it is investing $2BN into a Tennessee factory to begin building electric vehicles, including a newly revealed fully electric Hummer truck. The company plans to invest a total of $20BN into electric and autonomous vehicles between now and 2025. At the bottom of the S&P were IBM and Philip Morris, which sank 6.5% and 5.8% following their quarterly earnings reports. Philip Morris stock fell despite beating earnings expectations and revising its forecast upwards; the company reported that tobacco product volumes improved versus Q2 but were still down year-over-year.

UK airports are losing £83m a week due to Covid

International Consolidated Airlines Group topped the FTSE 100 on Wednesday with a 6.9% gain. In the evening, however, a report from the Aircraft Operators Association estimated UK airports are losing £83m a week as a result of the Covid-19 crisis. The FTSE 100 was up marginally overall on Wednesday, with gains from names including InterContinental Hotels Group and Next balancing against losses from companies such as home builder Taylor Wimpey and software firm Avast.

The FTSE 250 enjoyed a better day, ending up 0.4% higher, led by Cineworld, soft drinks firm Britvic and easyJet, which were up 10.3%, 6.4% and 5.7% respectively. At the bottom of the index was travel booking company Trainline, which sunk 12.9% after it was announced that CEO Clare Gilmartin is stepping down from the job in February. Gilmartin sold more than three million pounds worth of Trainline stock in September.

Around 30 US companies with a market cap greater than $10BN report quarterly earnings yesterday, including Biogen, Thermo Fisher Scientific, Chipotle and more.

In the UK on Thursday, Unilever’s earnings will be one to watch.

Tesla: Tesla’s earnings report today will be one of the most hotly watched this earnings season, after a mammoth 400% share price gain in 2020 so far. Key points of interest will be the firm’s profit margins, the number of vehicles it has managed to deliver in Q3, and progress on its new Model Y SUV – which is key to the company sustaining its growth trajectory. Similar to other stocks that have enjoyed huge gains this year, investors will be looking for signs to justify Tesla’s near $400bn market cap. Wall Street analysts still remain split nearly down the middle between buy, hold and sell ratings on Tesla stock.

Verizon: Telecoms giant Verizon’s share price has lagged the broader market in 2020 so far, but amid what is likely to be a muted Q3 earnings report today, the opportunity that 5G adoption presents will be a key point to watch. Apple’s first 5G enabled iPhone has hit the market, and Verizon is now engaged in a battle both to capture 5G market share and to encourage existing customers to upgrade to pricier 5G packages. Wall Street analysts lean towards a hold rating on the stock and are anticipating an earnings per share figure of $1.22 for Q3.

Abbott Laboratories: Abbott Laboratories has been front and center of the Covid-19 crisis, as it has been a major provider of testing, including the recent development of rapid testing capabilities. The firm’s share price is up 24.8% year-to-date on the back of the pandemic induced demand for its services, and expectations for how that demand will sustain over time as the pandemic develops will be a key point of focus on the company’s earnings call today. Currently, 16 analysts rate the stock as a buy or overweight, three as a hold and two as a sell or underweight.

Crypto corner: Bitcoin storms back through $12,000 mark on stimulus talks

Bitcoin has shot back through the $12,000 mark overnight, and is up 2% this morning, after progress was made on US stimulus talks. House Speaker Nanci Pelosi said a bill for the compromised aid is on the way after confirming a fruitful, 45-minute call with Treasury Secretary Steven Mnuchin.

Drew Hammill, Pelosi’s deputy chief of staff, reportedly said the 45-minute long conversation provided “more clarity and common ground as they move closer to an agreement” and demonstrated that both sides were “serious” about a compromise.

Mark Meadows, the White House chief of staff, told CNBC the pair had made “good progress, and even further progress today”. However, he added that there will still be some “open items” that needed to be resolved. “We’re not just down to a difference of language and a few dollars, we still have a ways to go,” Meadows said.

The progress weighed on the US dollar, which fell back and boosted Bitcoin. It is now trading at its highest level since mid-August, which itself was a two-year high.

All data, figures & charts are valid as of 22/10/2020. All trading carries risk. Only risk capital you can afford to lose.