Shares in China hit a record high above $10TN overnight as the country’s swift recovery from coronavirus powers its economy.

The market capitalisation of all shares listed in Shanghai and Shenzhen hit $10.08TN, according to Bloomberg data, above the $10.05TN pinnacle hit in June 2015. It comes after a rally for leading indices in recent months which has overshadowed even the US.

The US itself has a packed corporate calendar this week, and yesterday saw earnings reports from banking giants JPMorgan and Citigroup, plus Apple’s launch event for the new iPhone.

Bank earnings were met with a lukewarm reception from investors, as despite beating analyst estimates, JPMorgan and Citigroup’s share prices both closed the day lower (-1.6% and -4.8% respectively). On its earnings call, Citigroup’s management faced a grilling from analysts after the company’s $400m fine last week which came with an order from regulators to fix its risk management systems. Bank of America analyst Erika Najarian asked if the firm is set to become “the new Wells Fargo in terms of regulatory issues.” 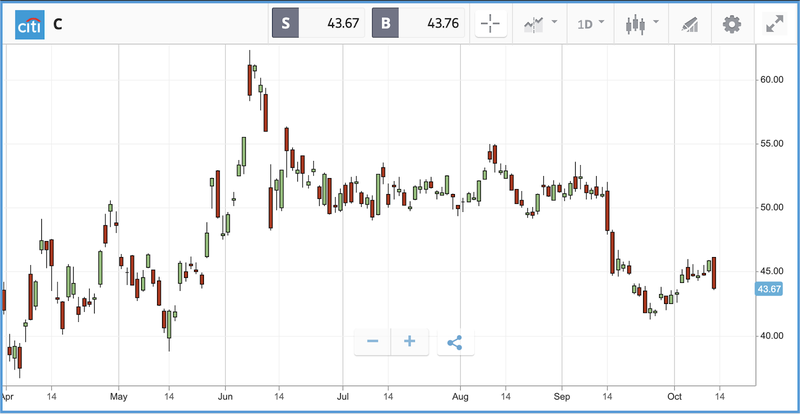 The investor reaction to Apple’s announcement of the latest set of iPhone models – including the first 5G iPhone – was also lacklustre. Some analysts have been predicting that the new models will lead to an upgrade “super-cycle” among existing iPhone owners, but Apple stock fell back 2.7% after the event.

Nine of the S&P 500’s 11 sectors were in the red yesterday, with the financial sector the worst performer of the day at a 1.9% loss. Cruise firms were the worst performers in the index, with Royal Caribbean, Norwegian Cruise Line and Carnival down 13.2%, 8.2% and 7.8% respectively. The sell-off followed Royal Caribbean’s announcement that it is raising $1bn through public stock and private debt offerings. Royal Caribbean also said that it is suspending all departures from Australia and New Zealand through to the end of the year, after cancelling all of its November sailings from Florida.

The other major piece of corporate news yesterday came out of Johnson & Johnson, which said it should know within days if it can resume its Covid-19 vaccine trial following a participant illness. Johnson & Johnson stock closed the day 2.3% lower.

Of the three main US stock indices, the Nasdaq Composite had the best day, closing just 0.1% lower – boosted by gains from eBay, PayPal and Netflix.

London-listed stocks fell back yesterday, with both the FTSE 100 and FTSE 250 in the red, although the latter was hit hardest with a 1.5% loss. Investors had to digest UK job figures which showed that the unemployment rate is now at its highest level in more than three years.

Similar to the US, travel names were among the worst performers in the FTSE 250, with National Express and Carnival’s London listing closing the day 8% and 6% lower respectively. In the FTSE 100, Rolls Royce, Lloyds and International Consolidated Airlines were among the names that dragged the index lower, with all three losing more than 4%.

In corporate news, the Telegraph reported yesterday that the cash Cineworld has in the bank may not last until Christmas, citing analysts at Bank of America. The analysts said that if the firm’s cinemas remain closed, the group could run out of cash in November or December, raising the possibility the company’s debt crisis may be set to get even worse.

UnitedHealth Group: Third-quarter corporate earnings season continues today, with US health insurer UnitedHealth the largest company up to bat. The company’s share price is up 12.7% in 2020, pushing its market cap past the $300bn mark. Last quarter, the company cautioned investors that a boost from lower patient care costs as a result of the pandemic delaying non-emergency procedures and care would only be temporary. Currently, Wall Street analysts lean heavily in favour of a buy rating on the stock and are anticipating an earnings-per-share figure of $3.11 to be reported today.

US banks: America’s financial giants will continue to deliver their quarterly updates today, with Bank of America, Wells Fargo, Goldman Sachs and US Bancorp all set to report Q3 figures. Investors will be paying attention to loan loss provisions for Q3, after banks set aside huge amounts in Q2 in anticipation of the pandemic leading to loan defaults, as well as expected timelines for loan losses to hit. Investment banking revenue will also be in the spotlight, after a strong showing in the second quarter.

United Airlines: Following key rival Delta, which reported a Q3 loss of $5.4bn, United Airlines report its own quarterly earnings today. Third-quarter revenue was down 76% versus the same period in 2019, although the company also managed to trim back its cash burn during the quarter from $27m a day to $18m a day. Investors will likely press management on that cash burn figure, as well as the timeline for a return to more normal demand.

Nasdaq-listed Marathon Patent Group has announced it is forming a new joint venture with a US energy company that will bring a supply of cheap energy for its bitcoin mining operations.

Marathon said it had teamed up with Maryland-based Beowulf Energy for the venture. Beowulf develops and operates power generation and industrial infrastructure facilities internationally.

According to reports, the deal will see Beowulf provide power to a new Bitcoin mining facility at a discount of 38% compared to the current rate Marathon pays.

The company says this, in turn, will cut its breakeven costs to mine one bitcoin from approximately $7,500 to $4,600. A single Bitcoin is currently trading at $11,355.

As part of the deal, Beowulf is also becoming a shareholder in Marathon, while the mining firm will retain all of the bitcoin mined at the new facility.

All data, figures & charts are valid as of 15/10/2020. All trading carries risk. Only risk capital you can afford to lose