The People’s Bank of China injected a record amount, CNY257.5 billion (~US$37.9 billion), into the money market yesterday in an attempt to support businesses.

The government then announced a series of measures to spur growth, including increased spending and plans for large-scale tax cuts and reductions in social security fees paid by employers. This is consistent with past monetary and fiscal moves by Chinese authorities aimed to maintain a steadily growing economy.

I'm perplexed as to why shorter dated bank bills are trading so far above the cash rate — note the chart below (the blue line is the interbank rate and the red line the 30 day bank bill rate). It suggests that funding in the money market is tight (supply and demand) and should therefore be reflected in bank lending rates such as mortgages, which it is not. Does it mean that we are likely to see some margin compression when the banks next report? 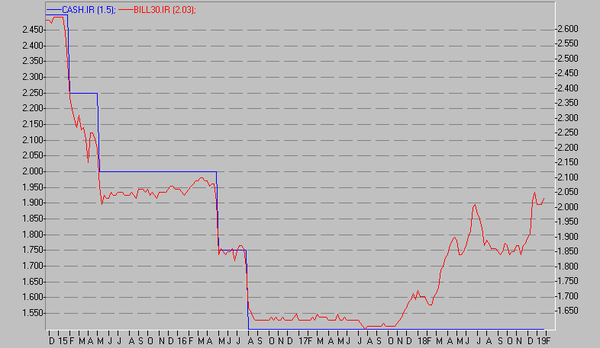 Another relationship of interest is that between the listed property trusts (red line below) and the Government 10 year bond rate (blue line) — note the general inverse correlation. Of late, though, the spread between the two has markedly widened and looks under pressure to start to reverse with bonds having rallied very strongly. 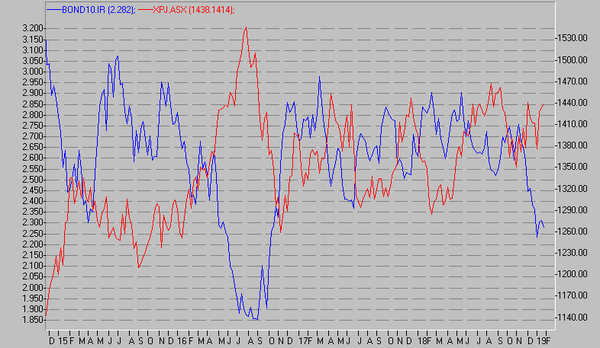 I've also considered the yield on the 30 day bank bills at 2.03% against the yield on the 10 year government bond at 2.28% and wondered if, at a spread of just 25 basis points, it is telling me we are headed for a period of very slow economic activity, a fall in inflation, or both.

Markets were mixed overnight with the UK and Europe all down and heading into their close. The Nasdaq is down, while the S&P and Dow are up. Our index futures are down three points and the Australian dollar is at US$0.7146.