While the Australian stock market responded positively to the strong lead from Wall Street after the Dow surged more than 2000 points or 11% overnight, the gains were nowhere near those experienced in the US.

The S&P/ASX 200 (XJO) was up 3.2% at midday, well short of the Dow’s increase and dragging the chain behind markets which are currently trading such as Japan and China.

In those countries, the Nikkei 225 and the Hang Seng were both up by about 4.5%.

It would appear that the ‘rose coloured glasses’ Trump address - ironically delivered in the iconic White House Rose Garden - resonated better with US investors than it did throughout the rest of the world.

In terms of individual sectors, this was the lie of the land at midday.

As you can see, the big winners were some of the heaviest sold down sectors including Industrials (XNJ), Financials (XFJ) and Materials (XMJ), with the latter including the large mining companies.

Two of the more resilient sectors during the recent sell-off have been Healthcare (XHJ) and Consumer Staples (XSJ) as companies in those sectors were expected to benefit from the provision of products and services in relation to health needs and food respectively.

Consequently, there are no surprises in terms of where the money is heading today.

Though, after the strong lead from Wall Street, some investors were no doubt hoping for a bigger kick.

Our reaction was no doubt tempered by the much more pessimistic albeit seemingly more realistic commentary from our leaders than the message delivered by Trump.

It was also accompanied by a significant uptick in regulatory restrictions, further emphasising the gravity of the problem.

One of the interesting sub-sectors that came under the spotlight was the S&P/ASX Gold Index (XGD) which has a mix of large and smaller stocks, with a substantial contingent not in the broader ASX 200.

Consequently, there were some big moves from smaller more speculative groups, but one of the companies that surprisingly didn’t features so strongly in terms of percentage gains was ASX 200 stock Regis Resources (ASX:RRL).

It could be one to watch, particularly if the rally in the gold price is sustained as it has a very robust production, earnings and dividend profile.

In fact, of all the companies in the gold sector Regis’ dividend yields relative to its current share price would be close to the highest on offer.

Furthermore, with zero debt and cash and bullion of about $170 million and strong production growth tipped in coming years there could be even more dividend growth.

Analysts at Bell Potter ran the ruler across the company as recently as February 17, reaffirming their buy recommendation and upgrading the price target from $5.61 to $5.72, representing a sharp premium to the midpoint of this morning’s trading range, which was in the vicinity of $4.00.

As we have outlined below, Regis has strong financial metrics as it trades on a low PE multiple relative to its growth profile, as well as being an attractive yield play.

However, it has outperformed the S&P/ASX 200 Gold Index (XGD) over the last week, and on Tuesday shares in the company surged more than 10% to close at $3.84.

Regis is an Australian-based producer which on a global basis is one of the lowest cost producers, while also benefiting from the low AUD:USD exchange rate which now implies an Australian dollar gold price of about $2800.

As the following map shows, the company’s producing mines are in Western Australia, but the McPhillamys project in New South Wales will be central to the company’s future. 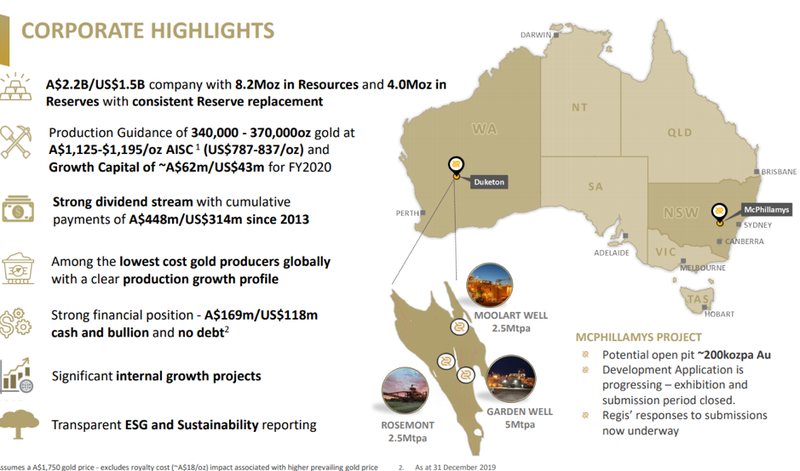 A development application is currently being assessed, and management anticipates that a potential open pit mine could produce at a rate of 200,000 ounces per annum.

This leaves a hefty margin of approximately $1700 per ounce based on the current Australian dollar gold price.

Based on a share price of $4.00, this implies a forward price-earnings multiple of 7.4 and a dividend yield of nearly 5.6% relative to 2021 projections.

Given Regis’ dividends are fully-franked, this implies a grossed up yield of 8%.

As we mentioned, don’t expect the dividends to dry up anytime soon given the company is debt free with cash and bullion of approximately $170 million.