Tokenistic investment or technology of the future?


The Seychelles’ stock exchange has become the first entity in the world to hold an initial public offering of security tokens.

Most of us view the Seychelles as the idyllic paradise it looks to be - marked by coral reefs and beautiful nature reserves.

This region of of the Indian Ocean is on many peoples' bucket lists and was once the hub of global shipping trade. It is now becoming a magnet for savvy investors, not least because it is developing one of the most technologically advanced stock exchanges - MERJ, the national stock exchange of the Republic of Seychelles.

The Seychelles exchange was developed as a result of the IMF and World Bank working with the islands’ government to build a financial services sector while coordinating with agencies like the OECD and FATF to ensure compliance with the highest international standards.

Just this week, MERJ, took a world first stance when it announced the initial public offering (IPO) of its tokenised shares, becoming the first entity in history to do so.

According to SWI, "tokenised stocks are digital assets representing shares in a company. The use of blockchain technology, a decentralised ledger that underpins cryptocurrencies like Bitcoin and Ethereum, allows the easy transfer of these assets between buyers and sellers, potentially reducing costs. Because they are classified as securities, regulatory hurdles have so far prevented bourses from launching such products".

The offering values the 8-year old exchange at US$25 million and is now open to investors from across the globe through the exchange’s own portal, as well as through collaborations with US broker-dealer Jumpstart, US custodian Prime Trust and London based blockchain provider Globacap.

MERJ is issuing 1,652,893 new shares at a price of $2.42 per share, raising US$4 million of expansion capital. The exchange’s tokenised security uses the ethereum public blockchain whilst also being listed on MERJ’s stock exchange and denominated in US dollars, providing investors a secure and familiar way to gain exposure to the growing digital asset industry.

“These novel financial instruments are here to reshape the financial industry for years to come,” said Edmond Tuohy, CEO of MERJ Exchange. “MERJ provides the regulatory framework necessary for investors globally to access these markets in a safe and compliant manner.” 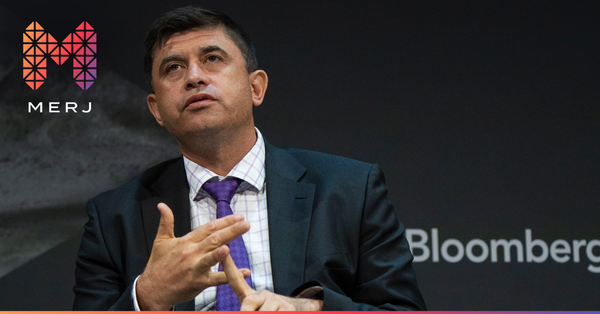 Touhy aso said: “There are a lot of people in the market who want this but there is a big gap at the moment: there is no, at least on the exchange side, well-regulated institution that does listing, trading, clearing, settlement and registry that’s using distributed ledger technology.”

Tokenisation is the process of converting a unit of asset ownership into a digital token on a blockchain. It can be applied to financial instruments such as equities and bonds, tangible assets such as real estate, fine art or rare cars, and even copyrights attached to intellectual property, authorship, or music.

For ordinary investors, this provides access to opportunities that were previously hard to come by. One of the main barriers has been the lack of a regulated infrastructure on which tokenised assets could be traded.

MERJ is pioneering a direct-access model that enables investors to access the exchange directly via web or mobile app, as well as institutional customers through more traditional broker and member channels. By combining this model with the far-reaching effects of distributed ledger technology, MERJ hopes to have a significant democratising effect on global capital markets.

MERJ EXCHANGE Limited, formerly Trop-X Limited, was incorporated in the Republic of Seychelles in 2011. The exchange went live in 2013 and upgraded from a correspondent member to an affiliate member of the World Federation of Exchanges in 2016. As an end-to-end Regulated Market MERJ has established and administers rules for the listing, trading, clearing, and settlement of securities.

So the Seychelles is no longer, just a pretty face, it is now pioneering the investment world.