Back in 2014, following the release of the Robocop reboot, Wired magazine wrote that we are 100 years away from seeing a real robotic cop in action.

While some may sigh in relief, the technology is pretty damn awesome.

Angela Watercutter, author of the Wired article wrote: Turns out we just don't have the battery power to operate a suit with that many moving parts for any length of time. Most iPhones barely last a full day on a charge, and a Tesla Model S can only make it about 300 miles before it needs to be plugged in—and that battery weighs more than 1,300 pounds (and is likely incapable of keep a human's organs running while being shot at).

"That's one serious limitation that our technology is not approaching yet," says Charles Higgins, an electrical engineer and professor of neuroscience at the University of Arizona. "In order to do a real RoboCop like you see in the movie, you need to have a very compact power source that's going to power all those motors all day—it doesn't look like RoboCop has to plug in every hour."

Fast forward two years and the Guardian reported that an egg-shaped robot was the news sheriff at a California shopping centre.

The idea for robot security gestated in response to the Sandy Hook elementary school shootings.

Former Dallas police officer, Stacy Dean Stephens, was at a board meeting of the not-for-profit International Association of Chiefs of Police (IACP), and found out that if the police had reached the scene just 60 seconds earlier they could have saved at least 12 more lives.

The issue was intelligence gathering.

“That was a problem we felt was definitely worth solving. And the only way to gain accurate intelligence is through eyes and ears,” he said. “So, we started looking at different ways to deploy eyes and ears into situations like that.”

Stacey co-founded Knightscope, which leases out robots as security aids. 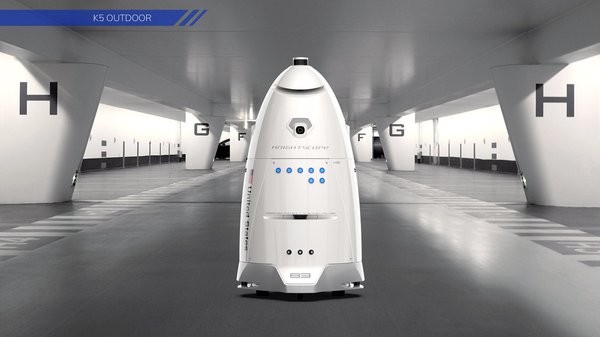 ...but given the progress we may be closer to a robotic cop than first thought.

Knightscope has come along since then.

The robots are a unique combination of self-driving technology, robotics and artificial intelligence and are manufactured at Knightscope’s Silicon Valley headquarters.

Over 6,000 investors have backed Knightscope, which has raised over $40 million in equity financing since it was founded in April 2013. It now operates across 15 states and 4 time zones operating autonomously – every day all day.

Knightscope is currently in the midst of an IPO.

The company is looking to raise US$50 million, with a minimum investment of $1000.

However there are problems.

When a fight broke out in Huntington Beach this week, one concerned citizen ran to the police robot and pressed the emergency button.

“I was pushing the button but it said, ‘step out of the way,’” Cogo Guebara said. “It just kept ringing and ringing, and I kept pushing and pushing.”

Except nothing happened until someone dialled 911 and the police rocked up 15 minutes later after the damage had been done.

ABC News writes, “Amid the scene, the robot continued to glide along its pre-programmed route, humming an intergalactic tune that could have been ripped from any low-budget sci-fi film. The almost 400-pound robot followed the park’s winding concrete from the basketball courts to the children’s splash zone, pausing every so often to tell visitors to ‘please keep the park clean’.

The problem with the robot: the button isn’t yet connected to the police department.

There have been further tribulations. A K5 robot patrolling around an office complex in Washington, D.C., ended up falling into a fountain and another struck a toddler at a shopping mall in Silicon Valley.

There is clearly a lot of work to do. However, we may not be 100 years away from seeing a real robot police officer.

Certainly, the first steps have been taken. 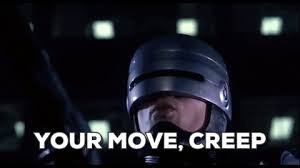