“Get to the choppa” is one of the most famous movie quotes of all time.

It was back in 1987 when Arnold Schwarzenegger yelled the phrase in Predator.

Since then, Schwarzenegger’s agonising cry has taken on a life of its own, with the Urban Dictionary telling us that ‘GET TO DA CHOPPA’ has now come to mean that ‘one is saying that they must attain whatever goal it is that is set forth’.

Furthermore, "getting the choppa" is the act of succeeding in this goal and is the highest possible recognition.

It seems Uber has taken the phrase to heart and is getting to the choppa, both literally and metaphorically. Although technically, it’s a passenger drone not a helicopter and it looks something like this: 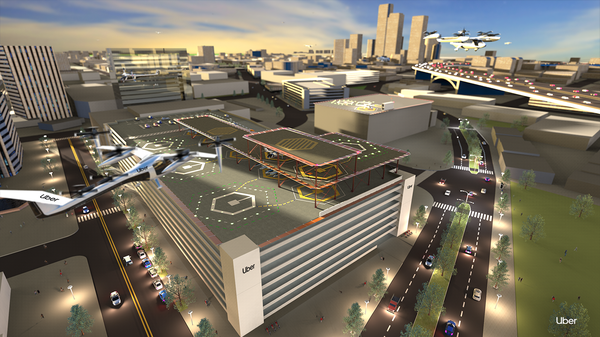 If you are yet to hear, Melbourne has been named one of three trial sites, along with Dallas and Los Angeles, for Uber Air, which will start test flights of its aerial taxi service in 2020, and move to commercial operations by 2023.

It certainly fits with the company’s overarching transport goals.

“Earlier this month (May) we took the important step of becoming a public company, and we are now focused on executing our strategy to become a one-stop shop for local transportation and commerce", said Uber CEO Dara Khosrowshahi at the company’s quarterly general meeting.

That focus has had its benefits in the first quarter, with Khosrowshahi reporting, “engagement across our platform was higher than ever, with an average of 17 million trips per day and an annualised gross bookings run-rate of US$59 billion. Our global reach continues to be an important differentiator, and we maintained leadership of the ride-sharing category in every region we serve".

Khosrowshahi has argued that Uber's future is not as a ride-hailing company, but as a wide technology platform shaping logistics and transportation.

Yet the numbers aren’t all good.

Uber was conservatively valued at A$118 billion on IPO – that was just a month after it announced a US$3.03 billion loss in 2018 from operations, and reported a net loss for the first quarter of 2019 of around US$1 billion on revenues of roughly US$3 billion.

So just like its proposed air travel solution, the numbers are up and down.

Perhaps this new Uber division will not only boost the number of users to its services, which are already strong, but it’s bottom line as well.

I, for one, will be using the service; taking a cheap flight over Melbourne at night is too good an offer to pass up (if civil aviators deem it safe).

If this is a success, no doubt Uber will ‘get to the Choppa’.