This is why we can’t have nice things.

There’s nothing worse than when you are watching YouTube videos and some clunky, unrelated ad assaults your ears and eyes.

Remember when Foxtel was ad free? Yeah me neither, but apparently it was.

It’s looking increasingly likely that Netflix and ads will overtake the infamous Netflix and chill, as the streaming pioneer rolled out its first iteration of ‘recommendations’ in August.

You may be wondering what on earth that actually means: after all, the platform already offered recommendations to users based on their previous viewing history. So what’s the difference?

It turns out that Netflix’s definition of what a recommendation is = ads. 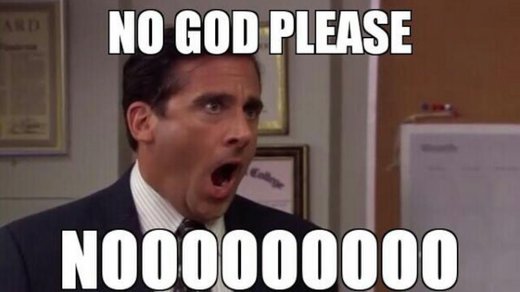 For now the ads can be turned off (phew), but that hasn’t stopped users voicing their displeasure. 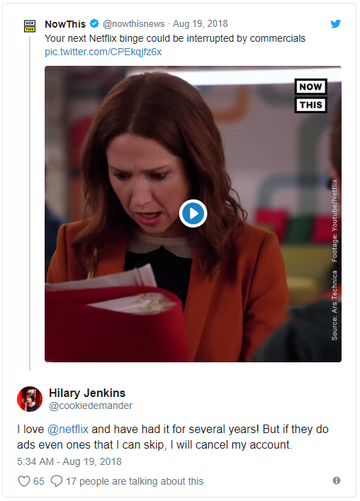 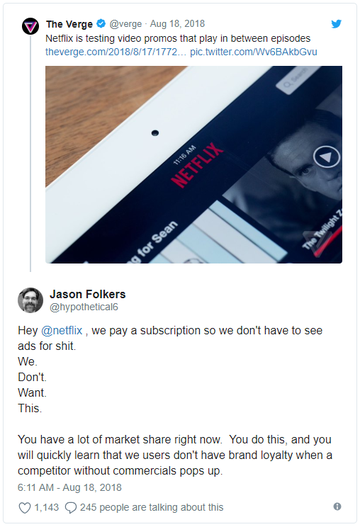 When requested for comment by Ars Technica, Netflix made the following statement on the ‘recommendations’.

"We are testing whether surfacing recommendations between episodes helps members discover stories they will enjoy faster.

“A couple of years ago, we introduced video previews to the TV experience, because we saw that it significantly cut the time member spend browsing and helped them find something they would enjoy watching even faster,” it said.

Oh okay, you just want to help us find something else for me to watch? That’s cool I guess.

Except it’s not, because that’s what the navigation sidebar, search function and the existing recommendations are already for.

Is this really about the user, or Netflix’s bottom line?

Unfortunately this move is likely a means to an end. A way to soften up consumers for the inevitable.

Logically, the move to experiment with ads is the perfect segue into selling premium ad space on in demand series, and considering that Netflix now boasts over 130 million subscribers – advertisers would salivate at the prospect of paid commercials.

A recent report conducted by Hub Entertainment Research suggests that Netflix could be in for a mass exodus if it implements ads full time.

Of the 1,612 US TV consumers (16-74) that were polled over Netflix ads, around 25 per cent indicated that they would cancel their subscription to the platform.

Jon Giegengack, who authored the report, spoke on the results.

“I think there are ways that they could arrange it so they retain as many customers as possible, but I think if they add ads at all, even at price reduction, there will be some people who leave.

“The question is, do the economics work out for them?”

Perhaps Netflix already knows user subs will drop in the mid to short term, but what if the adoption of advertisers cover this drop off and then some?

In addition, considering that its direct competitors are still well behind, it’s feasible the incumbent believes it can reclaim a large slice of that 10-20 per cent in time.

Netflix, you and I have shared some wonderful times, but it looks like I’ll be sailing back to the Pirate Bay.