Are hydrogen fuel-cells the future?

If you’re considering a lithium-ion battery car as your next vehicle you may want to hold off.

While lithium-ion batteries have headlined the next generation of vehicles, hydrogen fuel cell technology is beginning to gain pace.

The finalisation of a public hydrogen refuelling station in Canberra later this year – which will be Australia’s first – is just the latest indication that the tech is here to stay.

The station will fuel 20 new Hyundai Nexo cars, which are under order by the ACT government.

The A$1 million order is the largest hydrogen fleet contract in Australian history and makes up a key component of the ACT’s next gen vehicle policy.

The Nexo is Hyundai’s second gen hydrogen fuel cell car which combines a 95kW fuel cell with a 40kW lithium-ion battery pack. It has a driving range of up to 800km (approximately double of a conventional car) and can be refilled in just five minutes.

“Several years ago in hydrogen society they say it’s a chicken-and-egg game: if the infrastructure is ready, or the car is ready. We just blame each other,” Hyundai vice chairman Woongchul Yang said.

“The car is now ready, we have proved it at Hyundai, together with Toyota, a fuel cell vehicle can fully match the performance of conventional engines.

“Now we can grow dramatically.”

Hyundai is not the only notable carmaker pursuing hydrogen.

Earlier this month, Audi reiterated its commitment to hydrogen vehicles.

The revered German carmaker has teased a first look at its h-tron quattro SUV – its first fuel-cell concept. 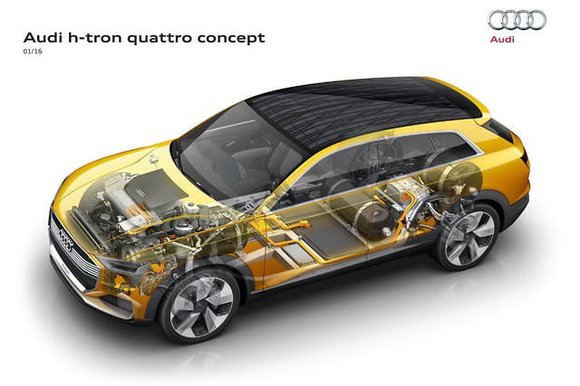 “We really want to speed it up. We are going to put more priority into hydrogen fuel-cell – much more money, more capacity of people and more confidence,” Audi chairman Bram Schot said.

Rumoured to be a working a prototype, the h-tron quattro will undergo a limited production run in 2021.

Much like the Hyundai Nexo, the h-tron quattro features a hybrid fuel-cell/lithium battery setup to maximise range.

The fuel-cell, combined with a small 35-40kWh lithium-ion cell, provides around 700-750km of charging range.

FCEVs are similar to conventional EVs (think Tesla), but replace a large section of the battery with a hydrogen fuel-cell. It’s this cell that utilises a hydrogen (one of the most abundant elements in the world) reaction to create electricity for the motor.

Hydrogen features a proton and an electron – which is stripped apart by the hydrogen fuel-cell, setting the electrons free to become electricity. The protons turn into hydrogen ion which bonds with oxygen atoms to form water.

The beauty of the entire process? No pollution is generated, unless you count the near harmless steam that is created during the separation of hydrogen via the fuel-cell.

A near abundant resource that creates energy without pollution? Sign me up.

So why haven’t we seen a full hydrogen vehicle yet?

The reason FCEVs have so far been favoured over full hydrogen batteries is because fuel-cells cannot be recharged outside of adding more hydrogen, whereas a conventional lithium-ion battery can gain charge via regenerative braking and other methods.

As a result, FCEVs are more complicated than traditional EVs and have little to no mobile refuelling capacity.

Regardless of whether hydrogen fuel-cells ever take off, the future of travel is looking bright.