Successful investors need to keep their emotions under control when assessing investments. In this two part series, finfeed.com examines how to take the emotion out of investing in order to make rational decisions.

Why do you become emotionally tied up in a stock, or reinvest in a losing stock?

When an investor is emotionally attached to a stock, they are likely to have difficulty looking at it rationally.

The sunk cost fallacy is manifested when an investor has a greater tendency to continue holding on to a losing investment, after money, effort and time has been thrown into the mix. Rather than realising the loss of capital and coming to terms with a point of no return for the losing stock, the investor believes it is important to ‘stick it out to the end’ and to stay loyal to the stock until its price rises back to break-even levels.

The sunk cost fallacy is sometimes referred to as the Concorde Fallacy, so named after the retired supersonic turbojet-powered airliner. The demise of the Concorde is in part attributable to unsustainably high costs and major marketing problems. There were low passenger uptakes and low orders for the airliner. However, even though it became obvious that there was no way the jet could make anyone any money, France and Britain kept throwing in more money on the premise that they already had too much invested.

Why are you so sure your stock is bound for success?

In psychology, ‘confirmation bias’ is manifested by a tendency to seek out information in a way that confirms one's preconceived ideas and notions.

For instance, people are fully aware of facts and reasoning but at the same time refuse to acknowledge them if they go against their beliefs and preconceptions.

In investment circles, some investors may be so emotionally attached to a stock that they ignore critical chatter which could better inform their investment decision.

Why do you feel driven to invest or buy a stock when it has recently soared?

Investors have a tendency to believe that what occurred in the recent past is likely to reoccur. Investors can be overly optimistic when markets are bullish and pessimistic when they are bearish. Greater importance is often placed on recent movements in the share price, rather than the longer term quality of the investment or underlying value of the company.

The momentum bias can be broken into two: positive and negative.

A positive momentum bias is one where everything goes our way and we experience a string of good luck. As a result, we become overconfident.

Both positive and negative momentum biases can distort the way we make rational decisions. Therefore, either humbly savour the win or remain resilient when faced with setbacks.

Why do you expect every other investor to see things your way?

The false consensus effect occurs where individuals overestimate how much other people agree with them.

An investor with tunnel vision, whose attention is solely focused on his own preferred position, is more likely to fall victim to false consensus. This investor will overestimate the popularity of his position, and make unfounded decisions on this basis.

Why do you expect a stock price to go down after it has been consistently going up?

The gambler's fallacy (also sometimes referred to as the Monte Carlo fallacy) is the belief that the onset of a particular random event is less likely to happen following a series of events.

For instance, say in a series of 10 coin flips you land on heads each time. Under the gambler's fallacy, you would suspect that it’s more likely that my 11th coin flip will land with the tails side up. However, each event is independent of the one before it. The past events do not have any influence or change the probability that certain events will occur in the future. The likelihood of a typical coin turning heads or tails up will always be 50%. 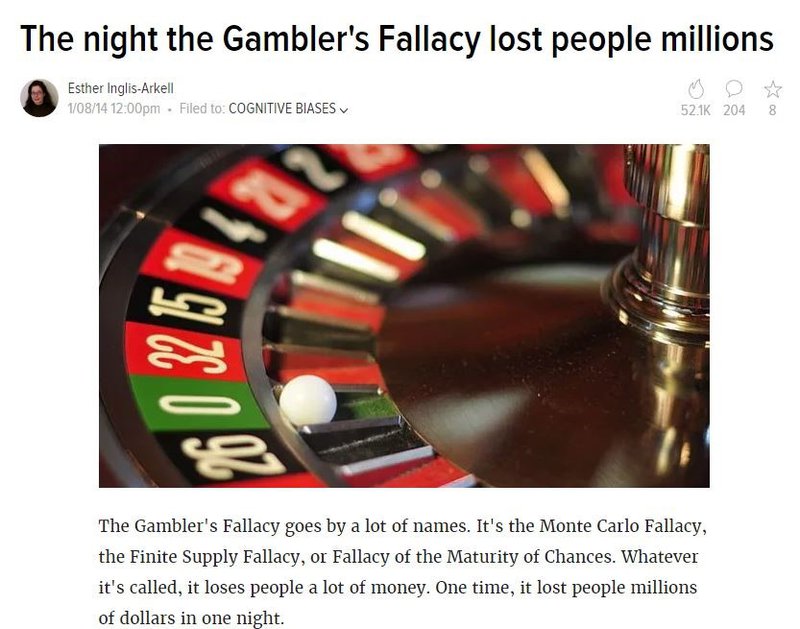 In the stock market, some investors have a tendency to believe that they should liquidate a position after it has consistently risen over a series of trading sessions. On the flipside, investors may choose to buy a stock at bargain basement prices after it has consistently fallen for no other reason than the gambler’s fallacy. Of course, strongly trending shares can be due for a reversal when they are overbought, or oversold. But these reversals are tied to fundamental reasons.

Look out for part 2 of this series next week, where we’ll look more in depth at the psychological mindsets that affect trading and how to best understand them.