Why are the world’s wealthiest people buying gold?

Seen as a wealth preservation asset during hard economic times and used as a monetary metal for thousands of years, gold is once again on the radar for the world’s elite.

Gold is seen as a low risk safety asset and investors tend to shift their portfolio into gold during times of economic and political uncertainty. Case in point: the super-rich buying up ‘Italian Job’ style gold bars.

Whilst many people are unable afford the 12.5kg bars, which at time of writing would be worth around A$693,700 a bar (at a gold price A$1700 per ounce), we can gain exposure to the precious metal in the stock market through gold stocks.

Legendary investor and billionaire George Soros is one of the members of the upper echelon moving his investments into gold by acquiring a $264 million stake in bullion producer Barrick Gold.

The former hedge fund manager believes a hard landing in China is inevitable, adding that such a slump would worsen global deflationary pressures.

Fellow billionaire investor Stanley Druckenmiller, is also bullish on gold and sees it as the obvious investment in response to central banks around the world moving interest rates into negative territory, labelling the monetary policy as ‘absurd’.

Member of the most powerful banking dynasty known to man, that largely built its wealth on gold, Lord Jacob Rothschild penned an op-ed Reiterating the message of his billionaire comrades above.

This follows on from Rothschild’s warning issued to investors late last year in his half yearly statement that expressed caution in markets going forward due to numerous of factors including:

To date, none of the hotspot areas mentioned in Rothschild’s report have been resolved, rather many have worsened.

Should these spot fires continue to gain in size and momentum we could see the economic turmoil that Soros, Druckenmiller and Rothschild are all warning about, increasing the argument for having gold in ones portfolio.

Demand for gold at all-time highs

With uncertainty brewing in markets around the world, we have seen a flight to safety with global gold demand up 21% in the first quarter of 2016 compared to 2015, according to the World Gold Council.

This has been led by the central banks of China and Russia who have been acquiring the asset hand over fist in recent years to bolster their reserves.

Due to its perceived safety we tend to see demand, along with the gold price, spike in times of uncertainty.

With the EU referendum date drawing near, the potential for a Brexit has seen demand for gold surge yet again. Gold sales at the UK Royal Mint are up 32% from last month and still coming in hot.

Whilst some investors buy the physical metal itself, many prefer to gain leverage to the gold price through the stock market.

For example a +10% move in the price of gold could see gold stocks gain 100% in turn, we have seen this already in 2016 through the XAU and HUI gold sector indexes both doubling since the beginning of the year.

The XAU is a capitalisation-weighted index composed of companies involved in the gold and silver mining industry.

It is important here to remember that past performance is no guarantee of future performance.

Let’s take a closer look at the XAU index vs the spot price of gold in USD: 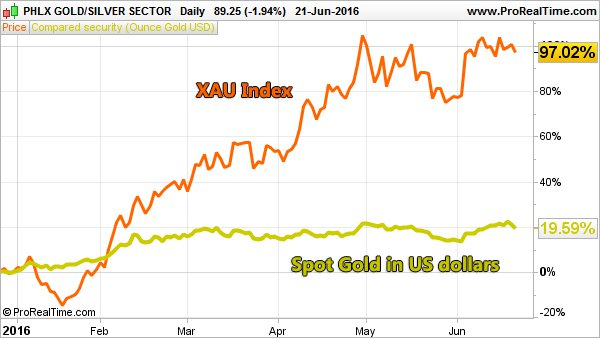 The chart above demonstrates how gold stocks can be used as a leverage tool over the actual physical commodity.

Drilling down into specific companies, the world’s biggest gold miner, Barrick Gold Corp (NYSE:ABX), ended 2015 at $7.38 per share. Since then the gold price has risen only 20% in relation to the US dollar, yet the stock is now trading at around $19-20 a share, increasing its market capitalisation by around 260%.

The same can be seen with reference to many gold companies on the ASX, with Australia’s biggest gold miner, Newcrest Mining (ASX:NCM), going from $12.97 per share to be trading currently in the $21-22 range over the same time frame, up 66%.

Soon to be gold producer Blackham Resources (ASX:BLK) is another Australian company that has seen its share price almost double over the past 6 months.

Once again, past performance is no guarantee of future performance and if you are looking into investing in these stocks, you should seek professional financial advice.

Should the gold price take off as many experts believe, including commodities expert Jim Rickards who is calling for US$10,000 p/oz gold in the future, we could see many gold miners and explorers experience a strong re-rating.

With the world’s power elite moving into gold it may be worth considering getting some gold exposure into your portfolio. Especially for those looking to leverage any potential upside moves in the price of the precious metal through gold stocks.