Where in the world to park your money

Since signs of a recovery post the global financial crisis started to emerge around the 2010 mark, opinions have shifted dramatically regarding the regions which offered most upside for investors.

Even retail investors have many more options at their disposal these days in terms of tapping into overseas markets. However, it isn’t so much having the capacity to target particular markets, as it is finding a region which offers the best investment potential.

Finfeed.com has undertaken a globetrotting exercise at a time when the UK appears to be set for the first interest rate rise in 10 years, while the Trump administration could be marched inside two years.

Making it all the more difficult is the fact that markets aren’t as easy to understand as they once were. The inverse relationship between the direction of interest rates and equities markets is no longer clear cut, as Central Bank monetary policy effectively created new money electronically to buy financial assets such as government bonds. This process aimed to directly increase private sector spending in the economy and return inflation to a preferred range at a time when economic growth was stagnant.

Quantitative easing followed by more quantitative easing dominated the headlines in the US, and this trend of artificially manipulating markets gained prominence across Europe. While it doesn’t bear the same name in Australia, the sustained downward trajectory in interest rates was a reflection of negative economic domestic and global trends.

This brings us to the UK, a country delivering its first interest rate rise in 10 years despite political instability and an uncertain future courtesy of Brexit. However, while the first in 10 years may seem an interesting milestone, the question needs to be asked whether it is of any material significance in terms of global equity markets.

Economic health should be priority, not an 0.25% rate rise

Will a move from 0.25 per cent to 0.5 per cent result in mortgage stress, depressed consumer spending and a meltdown in equities markets? History suggests not.

Consequently, with the European Union tracking in line with expectations, mixed news coming out of China and the US a political trainwreck with a brittle and uncertain economic outlook (US$4.5 trillion balance sheet), investors must be searching for some predictability. Perhaps in the form of an emerging market, similar to the BRIC (Brazil, Russia, India and China) focus adopted as the new millennium unfolded.

Of course, history shows us that the BRICs lacked the mortar to hold it all together, as they also had their ups and down. However, there has been a multifaceted dynamic change in China’s economy, and India has really fired up over the last two years with the India SENSEX stock market index surging from circa 23,000 points in early 2016 to more than 33,000 points.

In that case, should investors be looking for the next China or India? First, however, let’s not be so hasty to discount the world’s largest economy.

Is the US as good as equities markets indicate?

There has been so much focus on global geopolitical tensions and electoral manipulation in the US that investors seem to have lost sight of the fact that many of the underlying policies (most with highly material economic ramifications) that drove Trump’s ascendancy to President have not come to fruition. In fact, many of them don’t even have the support of his own party.

A large proportion of the Trump vote hinged on his ability to deliver health reform, infrastructure spending and tax relief — promises he has failed to deliver on, leaving him with a shaky hold come mid-term elections in November 2018.

That may seem a way off, especially as measured by the amount of damage the President can do via a knee-jerk tweet. But the lack of confidence in his administration could now be described as a contagion, rather than isolated pockets of doubt.

In a recent article, CNN said that top White House aides, lawmakers, donors and political consultants were privately asking whether the President realised that losing the house next year could put his presidency in peril.

Further, CNN reported, “In more than a dozen interviews, Republicans inside and outside the White House told CNN conversations are ramping up behind the scenes about whether Trump fully grasps that his feuds with members of his own party and shortage of legislative achievements could soon put the fate of his presidency at risk”.

The rise and rise of the Land of the Rising Sun

Stepping outside the major markets, Japan is letting the numbers do the talking. The JPY113.6 billion trade balance announced in September was a huge outperformance compared with consensus of JPY104.4 billion and represented the ninth consecutive monthly increase.

Exports were also up 18.1 per cent compared with the previous corresponding period. However, this data failed to create strength in the Japanese Yen, a reaction that could normally be expected.

This brings us to a very important analysis of recent economic dynamics compared with historical norms. The charts below clearly demonstrate that the direction of the USD/Yen is normally mirrored by the performance of the Japanese share market. 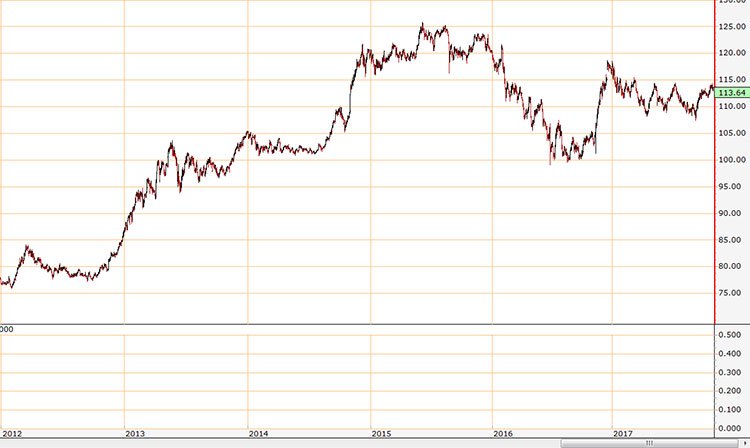 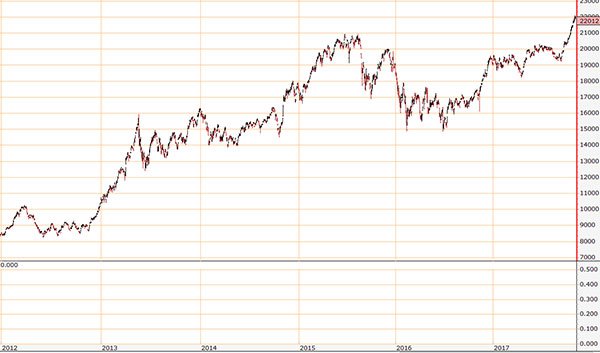 However, this trend has been broken over the last 12 months and most decidedly since September as the Nikkei surged to an all-time high of circa 22,400 points. The index has now gained approximately 50 per cent since mid-December, creating a distinct disconnect between performance of the Japanese share market and the Yen.

By comparison, the Japanese Yen has only gained circa 5 per cent over the same period. While some could assume that this is a demonstration of confidence in the US economy, that seems a stretch.

With debt to GDP the worst in history, its administration in a state of disarray and a balance sheet that can’t mathematically fund Trump’s election promises, confidence remains scarce.

Japan marches to the beat of its own drum

The other conclusion to draw from these events is that Japan is now perceived as an economy that can run its own race with strong corporate earnings underpinned by a resurgence in its manufacturing industry, a strong position in the IT space and a burgeoning services sector.

This has also flowed through to wages growth — something that has eluded the US — and in part has been responsible for the Federal Reserve taking a conservative stance towards interest rates.

Positive headline job numbers in the US have been misleading, as it is wages growth that generates consumer spending, which feeds either directly or indirectly into nearly every sector of the economy.

It is also worth noting that activity in the construction and services sectors is likely to accelerate as the 2020 Tokyo Olympics approaches. The associated uptick in spending, as well as the long-term tourism benefits for those getting their first taste of Japan, should also help.

How Australian investors can get a chunk of Toyota and Sony

Australian investors who believe in Japan’s prospects can get a piece of the action by investing in iShares MSCI Japan ETF (ASX:IJP). As the following chart indicates, this ETF has been performing strongly, recently claiming an all-time high.

However, if this is an inflection point in the Japanese economy, there could be more upside to come. 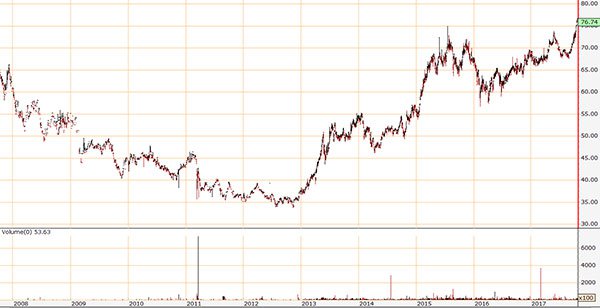 As the following table indicates (as at October 31, 2017), IJP provides investors with exposure to huge corporations across a wide range of industries and includes household names such as Toyota, Honda and Sony.

Interestingly, the average PE multiple for the portfolio is 16.6. Large financials and IT stocks in the US, particularly the latter, tend to trade on multiples well in excess of this level.