The group only listed on the ASX in mid-April, but since 1994 it has been involved in managing the movement of goods and information. WiseTech boasts more than 6000 customers across 125 countries with its core CargoWise One global logistics brand at the centre of its product offering.

Mason has an outperform recommendation on WTC as he sees the business model as highly scalable which is certainly evident when looking at the company’s performance over the four-year period to June 30, 2016.

During this period revenues have approximately doubled to $103.3 million and EBITDA has increased from $8.9 million to $31.5 million. 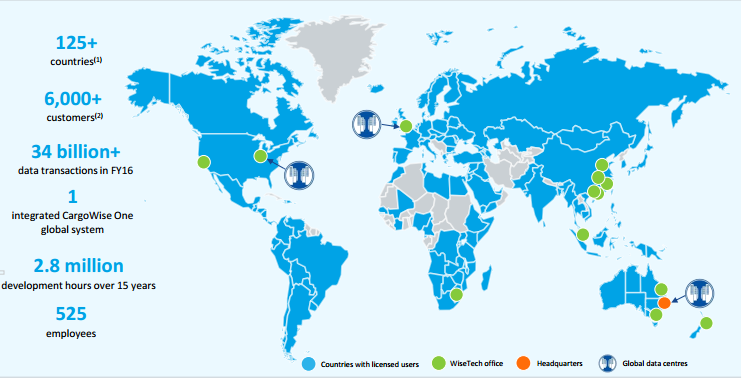 Not only has WTC’s underlying business performed well in recent years, the group delivered an outstanding fiscal 2016 result with the net profit of $14.2 million representing growth of 37%, well above the prospectus forecast of $13 million.

Following the strong fiscal 2016 performance management lifted its 2017 revenue and EBITDA guidance from $148 million to $155 million and $50 million to $55 million respectively.

It should be noted that growth levels such as these are never guaranteed to continue and as such professional financial advice should be sought if considering this stock for your portfolio.

Mason is forecasting the group to generate a net profit of $29.8 million in fiscal 2017 from revenues of $152.2 million. This represents earnings per share of 10.2 cents, placing the company on what would appear to be a testing PE multiple of 53.

However, exponential growth is forecast over the next five years with Mason projecting the company to generate five-year compound annual growth in EBITDA of nearly 60%, a level that very few ASX listed companies could boast. Consequently, on a price-earnings to growth basis (PEG) the company doesn’t look expensive.

Mason sees WTC’s lean operating model and genuine product differentiation as key factors in enabling it to achieve significant margin expansion as sales growth occurs. He also believes there is substantial scope for expansion with the company’s ultimate addressable market being in a range between US$7.1 billion and US$10.8 billion.

Mason expects strong organic growth to be complemented by the acquisition of leading global software providers in overseas markets. Purchasing new businesses allows WTC to integrate the acquired functionality into CargoWise One, and then offer all modules (including acquired functions) to both the acquired customer list and all existing customers.

WTC’s shares have retraced from their all-time high of $5.89 in early October to yesterday’s closing price of $5.40, perhaps representing a useful entry point given Mason has a 12 month price target of $6.50 on the stock.

Broker forecasts and price targets may not be met, and this data along with past trading performances shouldn’t form the basis of an investment decision. Independent advice should be sought before investing in this stock.