Will adversity breed opportunity in beaten down retail sector?

With many market commentators heralding a new era in consumer buying as the arrival of Amazon draws closer, and several profit warnings released from bricks and mortar retailers, one would have expected the S&P/ASX 200 Consumer Discretionary (XDJ) index to have trended downwards in the last 12 months. 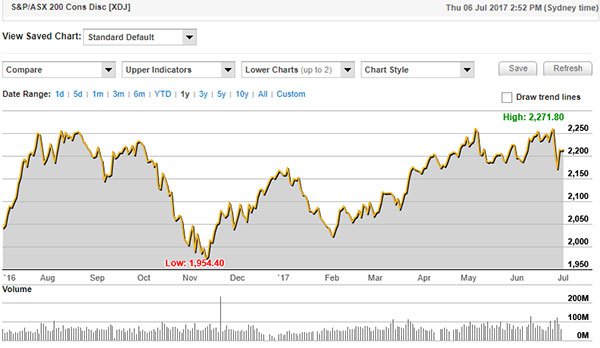 Notwithstanding this, poor performances from bricks and mortar retailers has been a feature of the sector over the last 12 months. But adversity often breeds opportunity, and it would appear that there are at least pockets of value even in traditional bricks and mortar stocks.

The retail sector started on a strong note in the first week of the new financial year with JB Hi-Fi (JBH), Super Retail Group (SUL) and Harvey Norman (HVN) being among the top 10 ASX 200 performers on Tuesday.

Perhaps a contributing factor was the absence of tax loss selling which occurred as June approached. However, as we will delve into later, it could also be the very nature of their businesses that is making them prime targets for bottom fishers in the bricks and mortar retail sector.

Regardless of the rationale behind the change of sentiment, the surge continued into Wednesday with Flight Centre Travel Group (FLT) stacking on 10% and the highflying Webjet (WEB), which already delivered its shareholders a gain of 74% in fiscal 2016, also among the top 10 performers.

The question needs to be asked whether it is time to wade back into the sector and if so, which stocks are worth targeting.

The following commentary and data shot from Wolf Richter founder and Chief Executive of Wolf Street Corp, squarely points to the fact that investors should be avoiding bricks and mortar retailers, while snapping up e-commerce retail stocks.

“On June 22, Sears Holdings announced that it’s preparing to close an additional 18 Sears stores and two Kmart stores by mid-September. Liquidation sales at those stores began at the end of June, a spokesman said. The Associated Press, which reported the store closings, said that they’re in addition to the closing of 226 stores announced so far this year: 164 Kmart stores and 62 Sears stores. The latest bout will trim the company’s footprint to about 1,180 stores, from 2,073 five years ago.

“These incessant waves of store closings are systematic steps toward what I can only interpret as the company’s goal of reaching a level of zero revenues. When Sears Holdings last reported earnings, I pointed out that over the past three years, Q1 revenues have plummeted by $3.6 billion, and that at this pace, revenues will be zero by Q1 2020.” 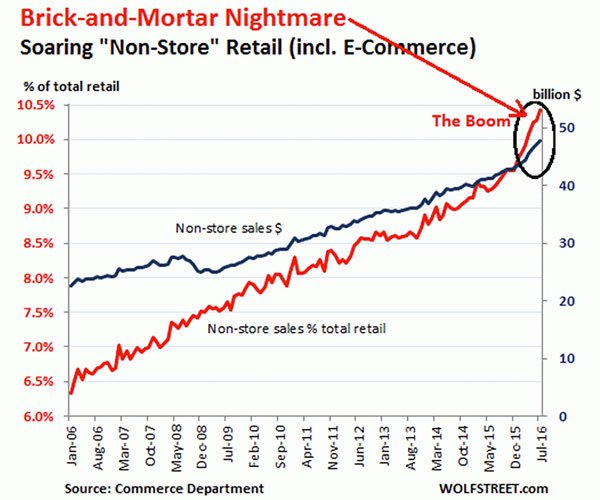 Even setting aside the bricks and mortar versus e-commerce conundrum, when assessing the performance of the Consumer Discretionary sector it needs to be kept in mind that a number of what could be deemed non-retail stocks make up the XDJ index.

For example, purchasing a newspaper or a magazine, or subscribing to a website is discretionary spending, and as such media stocks are included in the Consumer Discretionary index.

10 media stocks, or more than 25% of the XDJ, make up the index. Many have a large weighting which means that even small share price fluctuations can have a significant impact on the index.

These include News Corporation (NWS), Fairfax Media (FXJ) and REA Group (REA) with combined market capitalisations of more than $20 billion. The share prices of these companies gained 16.7%, 18.3% and 11.6% respectively in fiscal 2017.

A snapshot of the retail stocks in the XDJ shows that only three of 14 stocks delivered share price gains in fiscal 2017. Notably, these three stocks are in the travel and e-commerce sectors.

Webjet was the star performer with a gain of 74%, followed by Flight Centre Travel Group which delivered a gain of 21.2%. Trade Me Group (TME) gained 14.5% for the 12 months.

Interestingly, these stocks have traded strongly in the first three days of fiscal 2018, with Flight Centre being the standout performer – the company’s share price increased 15% relative to its end of financial year closing price of $38.30.

While many had written off Flight Centre, suggesting its bricks and mortar business would weigh on earnings from its online operations, if the six-month share price comparison with pure Internet play Webjet (black line highlighted below) is any indication, this theory could be flawed. 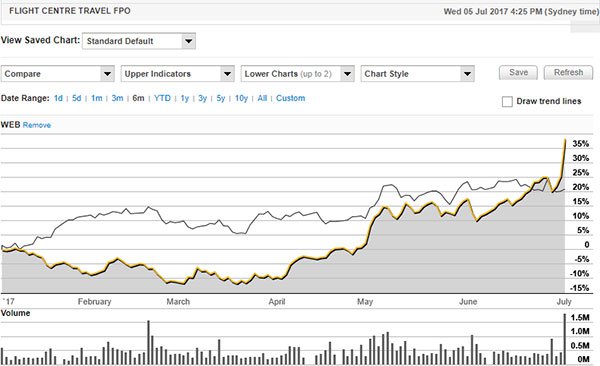 Identifying reasons for performance is a stock picker’s Holy Grail

In terms of formulating an investment strategy that works across all of the retail sector, it is about determining how Flight Centre has been able to successfully compete with the likes of Webjet.

Firstly, the company has invested heavily in establishing an online sales business to complement its substantial store network. Management recently said that it expects online sales to reach the $1 billion mark in the near term.

It is also worth noting that travel can be a very personal and complex experience, one which doesn’t necessarily lend itself to e-commerce sales practices.

Often travel agendas are made up of a mix of flights, accommodation and transfers, all being highly reliant on synchronisation. Even packaged products won’t necessarily fit the needs of travellers who need to tweak arrangements – a procedure which is much more easily arranged in a face-to-face setting.

Of course there can be other factors at play which make the bricks and mortar sales point more attractive than online purchasing.

One of the key factors worth considering is the type of products being purchased. Issues such as the benefits of a ‘touch and feel’ experience right through to the logistics of product delivery are important.

This is where retailers of larger, higher-price point products – as well as items that are time sensitive – have an advantage.

White goods are a prime example. Will consumers take a punt on an e-commerce supplier delivering a refrigerator before fresh and frozen foods spoil? Can a family household do without a washing machine for an extended period of time?

High price point electrical equipment is also worth considering. Will the purchaser of a 60-inch television be comfortable buying such an item without seeing it functioning in a store environment rather than viewing an image on a computer screen? 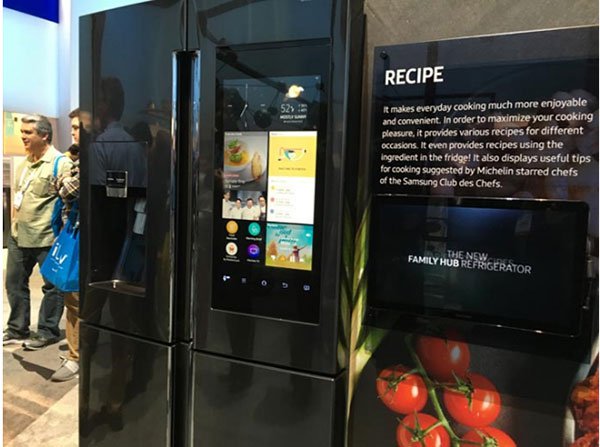 And lastly, having identified exactly which television to buy, why trust a third-party to transport such a valuable and sensitive item when most family cars can do the job?

While items such as computers, laptops and iPads are much smaller in size, the ‘touch and feel’ experience remains important.

If these issues are ones that can make certain bricks and mortar retailers more compelling investment propositions than fashion retailers, for example, that might explain the recent strong performances delivered by JB Hi-Fi and Harvey Norman. 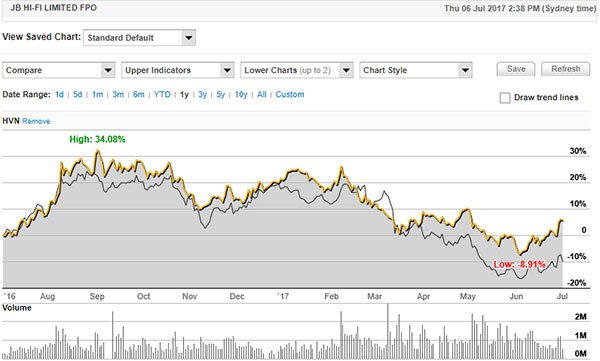 Given they are both bouncing off recent 12-month lows, as can be seen on the above chart, and are trading at discounts to consensus price targets, they may represent one of the ‘pockets of value’ I mentioned earlier.

From a stock picker’s perspective, there are clearly identifiable reasons why consumers have, and will continue to opt for, the bricks and mortar shopping experience – particularly when it comes to these kinds of purchases.