Will 2019 see a rebound in stock markets?

When all was said and done, 2018 was a bit of a shocker as far as the stock market goes — on the ASX, the US and beyond.

The year didn’t start out too badly, but with a number of global and domestic negative factors at play, things took a miserable turn in the second half of the year.

December was a particularly costly month — apparently, the worst December since 1931. This was topped off by a Christmas Eve which was the DOW’s worst, ever.

With plenty of investors feeling bruised by a shocking 2018, are there reasons to feel optimistic about the year ahead?

Things should turn around, according to history

Taking a look at the last circa 50 years, markets have typically stabilised in the 1-3 years following a big retracement.

If you take a look at the S&P 500’s five worst quarters since 1970, the years immediately following each saw fairly steep rises: 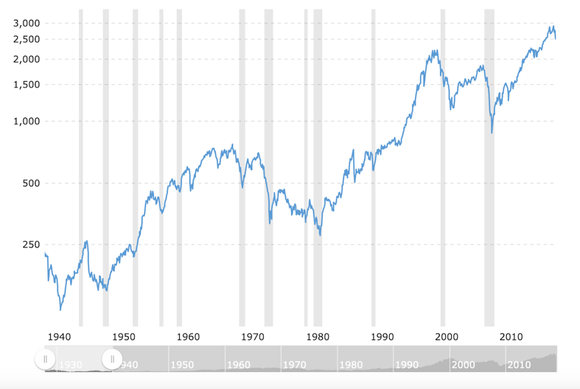 With those stats in mind, history should work in our favour on this one. The problem is that we don’t know for sure where we are in the cycle, and thus we won’t know when the market has hit bottom.

But in terms of the ASX and the US markets, a continuation of 2018’s decline would be unusual, and would represent one of the longest in history.

In the US, presidents’ third years have only been a negative year for the stock market twice before — and the last time was in 1939. For the third year of a president’s term, the S&P 500 has averaged an impressive 17.8%.

Of course, nothing about Trump’s presidency to date has followed any precedent that came before him (not in the US, anyway). The unpredictability and all-round volatility created by his style of leadership has been well-established.

Whether the market will recover regardless of Trump remains to be seen. In 2018, the ‘Trump bump’ had a significant effect on markets, and for the first half of the year it was largely positive. This has been attributed to tax cuts (which boosts companies’ after-tax profits and stock valuations) as well as his deregulation agenda prompting a bullish market.

It’s impossible to know whether the slump (which has been called the ‘Trump slump’) we are currently in will continue or whether the markets will follow well-trodden path of bear markets preceding a sharp rebound.

Weak Australian dollar a plus for ASX gold plays

The Australian dollar has been weakening for some time, dropping to US$0.70 by the end of 2018. 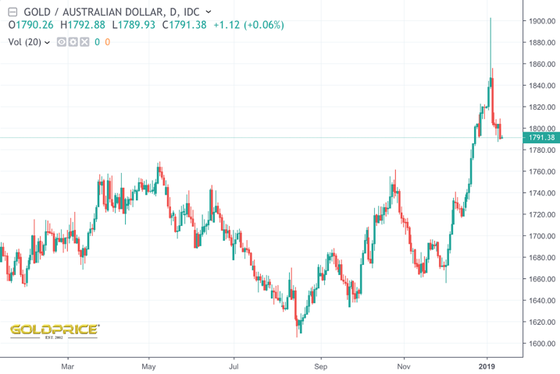 Unsurprisingly, there are ASX gold stocks, big and small, which are benefitting from ideal macroeconomic conditions so far this year.

Another area giving reasons to look on the positive side is the oil price rally that’s surprised everyone so far this year. The West Texas Intermediate (WTI) crude oil — used as a global benchmark — started the year at $45.41 and is now at $52.34: 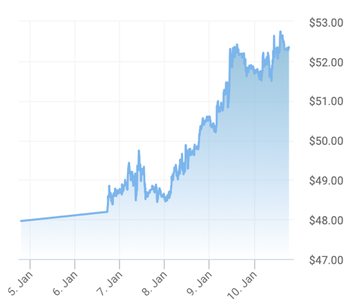 While there’s reason to feel positive about 2019, there’s an equal number of reasons to err on the pessimistic side in regards to the stock market.

In Australia, the deflating housing market is a cause for concern, coupled with the strong possibility of the RBA following the Federal Reserve’s lead in raising interest rates.

With current high levels of household debt, both factors could affect the bounce-back of the stock market, as mortgage holders potentially feel the pinch of higher rates, combined with reduced valuations. Reduced liquidity in the housing market has the added downside of consumers holding less free cash to invest in stocks.

Then there’s the daunting question mark over what (else) Trump is going to do this year. How long will the government shutdown continue? Where will the China trade discussions ultimately end up? Will Trump be impeached, causing even more market-crippling volatility at a global scale?

In Australian politics, we also face the possibility of a change in leadership, with Scott Morrison and the NLP unpopular, according to December 2018 polls which put the Liberals at a 10-point deficit.

Labor’s potential return to the helm could arguably be good for some stocks, particularly those in green energy or sustainability — while the flipside is it would likely be worse for oil and gas stocks, with the possibility of greater climate change-related regulation.

Like the start of every new year, it’s impossible to tell what stock markets will do and how investors will respond to the multitude of complex factors we are set to face in 2019.

But history tells us that even if the downturn continues, there will be winners to be found somewhere in the cycle — it’s just a matter of finding the right opportunities at the right time.