Why the RBA wasn’t tempted to lower rates

Those who were expecting the Reserve Bank to lower the cash rate on Melbourne Cup Day because the banks had raised theirs had short attention spans.

That’s the call from Reserve Bank chairman Glenn Stevens, who in giving a speech in Melbourne ysterday said the RBA was not tempted to cut rates in response to banks raising theirs recently.

Last month all four major banks lifted their lending rates in response, they said, in response to requirements from the Australian Prudential Regulatory Authority for banks to keep more capital on hand.

The APRA rules were put in place to make sure banks had enough cash on hand to keep themselves ticking over, even in the case of a global financial crisis.

Banks elected to raise the capital by charging customers more on their loans rather than passing the costs onto shareholders via a dividend cut or other measures.

With the big four all raising their rates, some had speculated that the RBA would lower the official cash rate to offset any shock to the economy which may flow from the banks’ move.

After all, the RBA has done this before.

It did it back in May of 2012 following similar raises in the lending rate from major lenders, and some expected this to happen again. 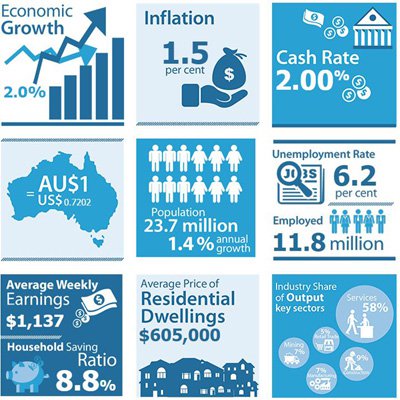 The latest snapshot of the Australian economy from the RBA

But Stevens told a business breakfast yesterday that the banks had been overly generous with cash rate drops in 2014 and 2015.

As the RBA moved its rates, Stevens said, the big banks had in effect elected to drop their rates at a greater pace than the central bank.

“For fixed rate mortgages and many business loan rates the fall was quite marked. The average rate on outstanding business loans, for example, fell by over 90 basis points during a period in which the cash rate fell by 50 basis points,” Stevens explained.

“Even for floating rate mortgages, rates had fallen a bit more than the cash rate.”

He said the recent rate rises by the banks had in effect reversed under half of the declines from last year. However, he stopped short of endorsing the banks’ move to raise rates.

Stevens said another impact of the banks’ generosity last year and the early parts of this year was that a lot of owner-occupiers were ahead on mortgage payments.

“We also note that a significant proportion of owner occupier households is ahead of schedule on mortgage repayments – in large part because these households did not lower their payments as interest rates fell,” he said.

“Most of these households are unlikely to need to part with extra cash each month as a result of the recent interest rate changes.”

He also predicted that the macroeconomic effects of the rate rises were not expected to be large, but that the RBA would keep an eye on things.

Elsewhere, he said if the RBA were to move on rates in the near-term, “it would almost certainly be an easing, not a tightening.”