Why landline telephony is losing the battle to VoIP

Since its invention more than two decades ago, technology called VoIP — which stands for Voice over Internet Protocol — has presented a completely new method of telecommunications for companies and organisations, as well as individuals looking for cheaper phone calls.

In a nutshell, VoIP is the transmission of voice data from one IP address to another.

In the last 10 years, VoIP has increased in popularity, as those in-the-know have come to realise its benefits, particularly as they apply to businesses and organisations looking to save a buck.

These days, the majority of us are familiar with being able to have a voice call over the internet, thanks to the wide uptake of software like Skype and Zoom, as well as Facebook’s voice and video call apps.

A particularly popular app used by those travelling or living overseas is VoIP freeware Viber. At last count, Viber had over 1 billion registered users.

It’s the business applications for VoIP, however, that are causing the biggest stir in the telecommunications sector — as more and more small to medium enterprises (SMEs) look to cloud-based solutions that can provide greater reliability and functionality at a reduced cost.

A brief history of VoIP

VoIP transmission first happened in 1973 as a result of the experimental Network Voice Protocol invented for the APRANET.

But mainstream access only came about in 1995 when the first internet phone software, Vocaltec, appeared. Vocaltec was not perfect and had a cumbersome list of requirements in order to work between callers.

Initially, VoIP was mainly used by individuals and IT companies who were technologically advanced enough to know about it, and also know how best to use it with the accompanying drawbacks in its earlier years of uptake.

Since then, things have come a long way in the world of VoIP. There are now many companies the world over who rely solely on VoIP as their phone system of choice.

The below graphic from the ACMA Communications report 2013–14 series shows the increased uptake of VoIP services per ISP provider in Australia between December 2010 and December 2014: 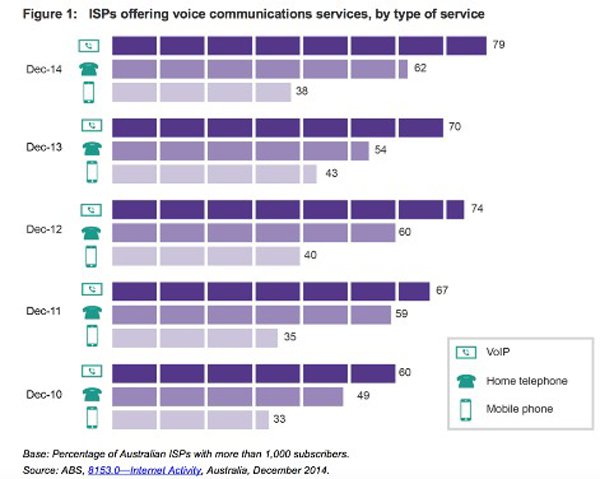 In the past, the main application of this technology has focused on the fact it is a cheap way to conduct international calls.

But VoIP is now considered simply a more cost-effective alternative to traditional landline phone systems, with a long list of advantages that are simply not possible from traditional phone networks.

Offering a VoIP solution in the modern era

There are players in the market offering VoIP services that target the SME market — a market where players are particularly motivated to gain these VoIP-enabled advantages and reduce costs. One of these companies is Vonex Limited (ASX:VN8) which listed on the ASX in June and is solving real world business efficiency issues through its technology.

It should be noted that Vonex is a speculative stock and investors should seek professional financial advice if considering this stock for their portfolio.

Vonex has designed its own feature-rich VoIP private branch exchange (PBX) system which it sells direct to SME customers, as well as through white label agreements with bigger telcos.

Its proprietary PBX VoIP software is the result of years of development, which it makes available to users through both its Wholesale division (as mentioned, this is the business arm bringing in revenues from white labelling the PBX systems to larger brands who on-sell it) and its Vonex Telecom direct business, which is bolstered by its channel (sales) partners.

As is the case with VoIP in general, VN8 offers businesses a lower-cost phone system that uses the internet as opposed to the traditional circuit-switched tangible network that’s built into an office (also known as PSTN, public switched telecommunications network).

As far as VoIP PBX systems are concerned, it is a solution that means not having to rely on a physical, central box in the building to which all the phones are connected, but instead a collection of devices that can talk to each other via the company’s existing internet connection through a cloud-based system.

Putting it another way, it is taking the ‘brain’ of the so-called landline phone network, and replacing it with a virtual system.

Not only does this make the system less expensive, but much more reliable and feature-rich.

This is part of the overall technological disruption across so many industries that sees a lot of physical hardware made redundant as it’s replaced by more efficient software-based systems. With VoIP PBX systems, we are seeing the ‘virtualisation’ of the landline system.

The below is a breakdown of the savings that are possible through Vonex’s technology for an SME with 10 users, over a 5-year period: 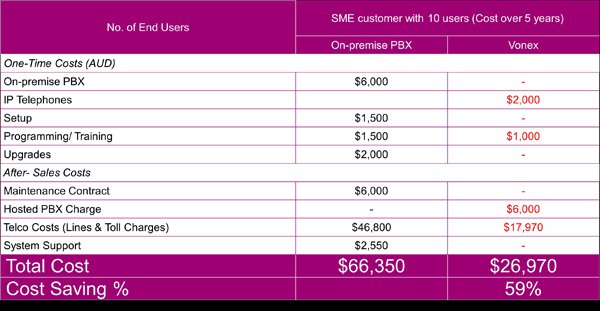 Its VoIP PBX system has more than 100 advanced features available, including being able to make calls via the same internal phone system (ie. an extension number) across countries, the ability to ‘push’ a phone call that began on a desk phone to a mobile phone with the push of a button, arranging for multiple numbers to all go to the same handset with unique identities, and getting voicemail sent as email.

The future of VoIP

The uptake of this cost-cutting technology has increased further since then.

In 2014, the US Federal Communications Commission announced it would be conducting trials on converting entire communities from PSTN to VoIP as quickly as possible.

This article published in Huffington Post the following year put it this way: “When it comes to business phone service, VoIP wins hands down. Offering numerous benefits without any negatives, VoIP is likely to become the standard telephone option for all businesses in the future.”

Is VoIP telephony set to become the new normal in the world of telecommunications? Looking at current trends, all signs point to yes.

For the A$8 million capped VN8, this means huge opportunities to capitalise on growing interest in VoIP across the SME sector — both as a direct seller of these products, and as a company providing the latest in VoIP PBX solutions to bigger telco companies looking to maintain their edge in the market.