With the world turning further towards renewable energy solutions, it is likely we will see more collaboration and innovation in this field as the year goes on, particularly among start-ups.

Already 2016 is looking like the year that renewable energy solutions will break out as new clean tech companies with big ambitions, give birth to brand new technologies.

The outlook for evolution in the renewable energy sector has green activists salivating.

The solar industry, after several false starts in recent years due to rebate confusion among other setbacks, is one industry set to make a big mark.

“We have witnessed myriad changes in the solar industry in Australia and we anticipate significant changes in the country’s energy market and how consumers perceive and take up renewable energy,” says Stephen Cranch, Solahart’s GM Sales and Marketing Renewables.

“We believe the introduction of the Tesla Powerwall battery in Australia will be a game changer.”

The Solahart collaboration will see Tesla Powerwall batteries retrofitted to existing photovoltaic systems, or sold as part of an integrated solution when paired with a new PV system.

“Our Research and Development (R&D) team thoroughly tests everything – and the Powerwall is no exception. We currently have the Tesla Powerwall in our test lab and have been conducting general battery storage testing for some time. 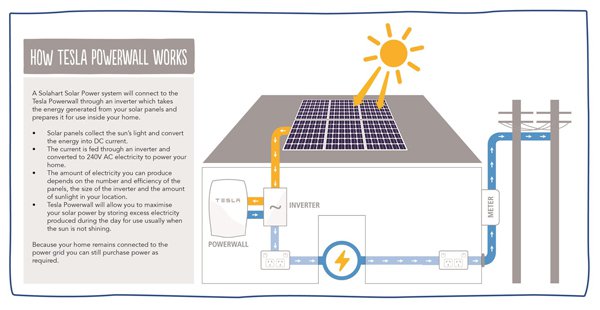 Solarhart has partnered with Tesla.

Solarhart’s move is a smart one, but it is the start-ups, however, that are generating the biggest buzz.

Tesla, itself, has become one of the biggest start-up success stories in recent times. And there is a great deal any start-up can learn from founder Elon Musk’s approach.

His brave move to open source Tesla’s patents to broaden the battery market, won’t be to every one’s liking or even practical, however it has encouraged other entrepreneurs to think big.

Ethernet co-inventor Bob Metcalfe has also turned out to be an inspiration to budding energy entrepreneurs.

Metcalfe is the co-inventor of Ethernet and believes that the same innovation principles applied to the Internet, should be applied to building a smart-grid for cheap and clean energy.

Taking this on board is UK-based James Johnston, who is the CEO and co-founder of Open Utility. Johnston was inspired to build the world’s first real-time peer to peer energy platform.

He told energy blogger Chris Cooper: “I realised the energy system, like the internet, would one day be a mere platform where customers and generators could upload their energy and have choice in what type of energy they consume.”

Cooper lays out the sometimes rocky journey Johnston has taken to get Open Utility up and running.

On the positive side Cooper writes, “Open Utility’s software is the first step towards making local energy trading not only possible, but also more economic than the alternatives.

“Such software could have global application. In Australia, this software could easily feed into the ARENA-funded trials of local energy trading currently taking place led by the Institute for Sustainable Futures at UTS, who are leading researchers in this field globally.”

ARENA, otherwise known as the Australian Renewable Energy Agency, has given funding to several projects including those in distributed energy, biomass gasification, solar collectors and solar cells. It currently has 30 solar projects on the go, including the likes of Dyesol, from whom we expect big things this year.

With the likes of Origin and Solarhart ramping up their energy efficiency product offerings, and ARENA handing out grant money we should see more start-ups take the plunge to enter the market with their own innovative ideas, tech and products.

Who knows, we may even find Australia’s answer to Tesla with whom bigger companies will have no hesitation in partnering.