What is gypsum and why is it forecast for 9.9% CAGR growth?

The benefits of gypsum as a plaster were discovered a long time ago by the ancient Greeks and Romans.

Yet its extensive usefulness in the field of agriculture wasn’t discovered until the 18th century, when both Germany and France realised gypsum had some major crop-boosting attributes.

Interestingly, in France this discovery came about because men who were working with alabaster/ plaster of paris (made with gypsum) had noticed the grass was growing better in the spots where they shook off the dust from their work clothes.

It was Benjamin Franklin who brought the idea of using gypsum as a fertiliser to the US in the 1780s, and it is actually one of the earliest forms of fertilisers used in the country.

Gypsum is considered a moderately soluble source of the essential plant nutrients, calcium and sulfur, and is known to improve overall plant growth.

One Australian company – American Pacific Borate and Lithium (ASX:ABR) – that we will look at in depth shortly is looking to capitalise on the growth of this market.

However, the size of the market share ABR can secure remains to be seen at this stage, so if considering this stock for your portfolio do your own research and seek professional financial advice.

Fertiliser demand saw a 2.4% increase in 2016/17. This isn’t a huge surprise when you take into account the major global issue of soil erosion, which has a significant effect on the land’s ability to support the growth of crops.

In 2013, the UN wrote the following regarding the status of global soil resources: ‘...the majority of the world’s soil resources are in only fair, poor or very poor condition’. Soil erosion is a problem that is largely considered to be the result of human practices, such as deforestation, overgrazing, tillage and other unsuitable agricultural practices.

The below table shows the top most fertiliser-dependent countries in the world, and their use as of 2013: 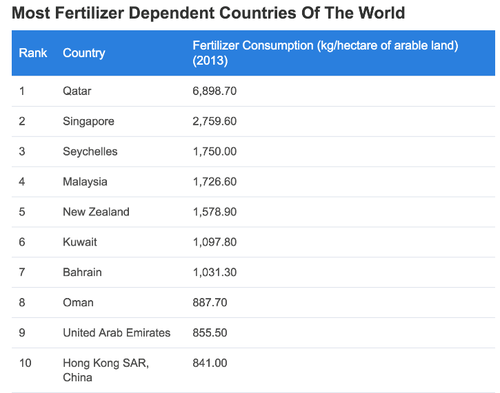 Due to a range of environmental factors, in many areas plants are becoming more deficient in the vital nutrient sulfur; that’s where gypsum’s abundance of sulfur comes in very handy for crop growers as an additive to the soil.

Calcium is required for most nutrients to be absorbed by plants roots, and is therefore also vital for plant growth. So, add in the fact that gypsum is a source of calcium too, and you can see why it is heralded as an ideal fertiliser, and why it has been widely used for hundreds of years.

Beyond those two vital elements, gypsum also improves water infiltration of crops which is extremely useful for the costly global phenomenon of drought — a long-standing threat with potentially disastrous consequences for farmers (and all of us who depend on them as a source of food!) in Australia and beyond.

As an agricultural product, gypsum is generally applied to soils in areas where sodium levels are high, as it has the ability to neutralise the effect of sodium on crops. As a convenient source of sulfur and calcium, and with the ability to improve water infiltration, the positives are clearly stacked as far as gypsum’s applications as a fertiliser.

ASX small cap a potential player in the gypsum market

American Pacific Borate and Lithium (ASX:ABR) is in the process of commercialising its 100% owned Fort Cady Borate Project in Southern California — a multi-asset project from which ABR is hoping to produce boric acid, Sulphate of Potash (SOP), lithium and gypsum.

As part of ABR’s multi-faceted plants, it is exploring options to sell by-product gypsum into the large Californian agricultural market.

The US gypsum soil amendment market has been estimated at US$30—US$40 million per annum by the company’s US-based fertiliser consultants, Context Inc. As well as bringing in cass, the sale of gypsum will also result in minimal waste products from ABR’s proposed operations.

Beyond its common use in agriculture, gypsum is also widely used in the construction of walls and ceilings in the construction industry — and boron-based gypsum, such as what ABR hopes to produce, actually improves product performance, user convenience and process efficiency.

ABR has undertaken recent discussions with local gypsum suppliers that suggest the company should be able to sell gypsum into the Californian market, and that there would be considerable demand for its enriched boron-gypsum product.

Context Inc.’s recent studies into US micronutrient markets for boron and SOP found that boron is the second most used micronutrient by value, and that its value is expected to grow by a strong 9 per cent CAGR through to 2022.

These findings reinforce ABR’s North American specialty fertiliser target market and supports the theory that a boron fertiliser and boron-enriched gypsum will attract high demand in both California and wider US domestic markets.

For now, ABR’s onsite testworks and bulk sampling program is ongoing and designed to: test the scoping study flowsheet; obtain bulk samples for equipment sizing; progress detailed engineering in preparation for the start of construction, and obtain product samples to provide to potential customers and partners.

ABR has stated that a definitive feasibility study is on track for completion in the second half of the calendar year.