Iron ore came off substantially (circa 4%) and the oil price declined approximately 1.5%. Base metals were also weak.

Negative sentiment towards financial stocks also contributed to the substantial fall in the Dow.

Both the Dow and the NASDAQ delivered their worst daily drop since September, coming off 1.1% and 1.8% respectively. The larger fall in the NASDAQ could be significant in that it is home to riskier stocks such as those in the IT and biotech sectors.

Some analysts are questioning whether the Trump factor which has had such a significant impact on the bullish trading conditions that have prevailed since his election has run its race. Furthermore, could there be a pronounced Trump slump around the corner if pre-election promises aren’t fulfilled.

Is the Black Swan gauge on the mark

Mark DeCambre from MarketWatch highlighted a popular stock market ‘Black Swan’ gauge which could suggest a significant downturn is imminent.

As he explains, the chart is a popular options market gauge of so-called Black Swan, or difficult to predict, events.

The CBOE Skew Index measures the relative cost of purchasing out of the money put options on the S&P 500. Put options provide the opportunity, but not necessarily an obligation, to sell an asset at a specific price and time, while call options give the owner the right to buy an underlying asset.

In highlighting the outperformance of the Skew index against the S&P 500, DeCambre noted that it demonstrates investors are more concerned about downside protection. 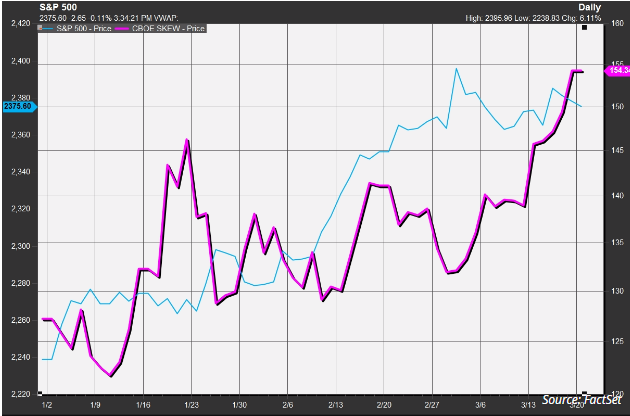 Negative sentiment extended to Europe with the FTSE 100 coming off 0.7% to close at 7378 points.

While base metals weren’t sold down to the extent that iron ore was, the across-the-board decline dragged down major mining stocks listed on the LSE including Rio Tinto and BHP Billiton, suggesting they could come under pressure today.

The latter has the added burden of being exposed to the declining oil price.

Copper (-1.8%) and zinc (-1.5%) experienced the most substantial declines, while lead and nickel came off less than 0.2%, a good performance in a bearish environment.

As is often the case in this environment, investors flocked to gold because of its safe haven status. The precious metal was up nearly 0.9%, closing in the vicinity of US$1245 per ounce, a level it hasn’t traded at since the start of March.