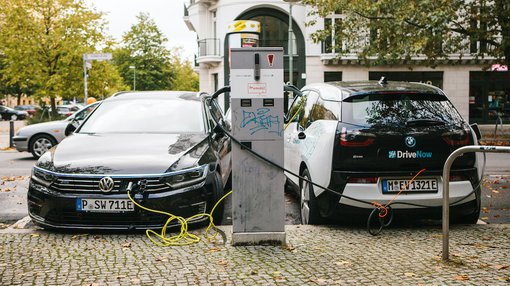 The existing practise of extracting lithium from hard rock sources, processing it, and then shipping it to European EV makers, generates significantly more CO2 emissions — 1.5X more, in fact — than manufacturing vehicles with internal combustion engines.

Car manufacturers are actively trying to reduce the carbon footprint of their battery supply chains in order to boost the green-credibility of their EVs to appeal to consumers and obtain premium pricing and to avoid financial emissions penalties.

Volkswagen (FRA:VOW), which owns the Lamborghini, Porsche, Bugatti, Audi and Skoda brands, is leading the way in developing the first carbon neutral vehicles. The company has committed to 100% green power in battery cell production along with 100% green power all the way through a vehicle’s life.

The car maker is placing great importance on having a CO2-neutral production supply chain for its extensive new EV line-up. It has put sustainability on par with price, using a raw materials purchasing metric and has given its suppliers an ultimatum on carbon emissions. 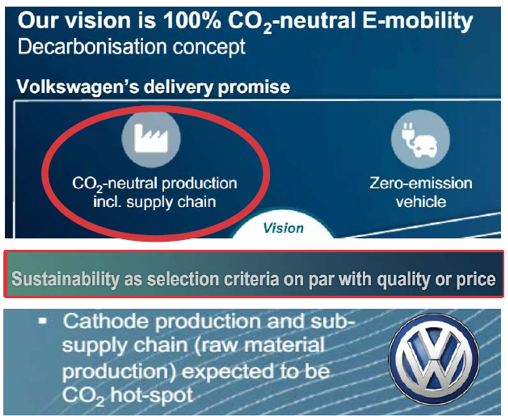 Like the wider market for EVs, demand for the low, or ideally zero carbon emitting vehicles will only grow with more manufacturers demanding carbon neutral production supply chains.

Europe is on track to triple the number of electric vehicles on its roads by 2021 and will easily meet the EU's car CO2 emissions target by 2025.

Europe, and Germany specifically, is an emerging hub for battery and EV manufacturers as growth in the sector surges.

Tesla has settled on a location outside of Berlin to build a “gigafactory”, where it will produce batteries, powertrains and electric vehicles, starting with the Model Y. The factory is expected to go into operation at the end of 2021. This is just one of many gigafactories being built in Europe in the early 2020s.

The industry is growing so fast that by the mid-2020s demand from the EU alone for battery-quality lithium hydroxide is forecast to equal the entire current global demand.

Located at the heart of the European auto and lithium-ion battery industry, ASX listed Vulcan Energy Resources (ASX:VUL) formerly Koppar Resources, is working to bring “Zero Carbon” lithium to Europe’s EV supply chain in a move that could transform the industry.

Vulcan is on track to develop Europe’s — and the world’s — first Zero Carbon lithium project, while generating a renewable energy by-product.

This comes at an opportune time, with demand from the EU for battery-quality lithium hydroxide forecast to equal the entire current global demand by the early 2020s.

Working in its favour is it has by far the largest lithium project in Europe — a globally significant Exploration Target of 10.73 - 36.20Mt of contained Lithium Carbonate Equivalent (LCE), at its project in the Upper Rhine Valley of Germany.

Europe, being a densely populated region, has few locations where producing lithium is possible from traditional hard-rock sources even if lithium is present, so given Vulcan’s project’s location, its low impact extraction method and its potential scale, it’s in a perfect position to serve the growing German and European EV industry.

VUL Boosts Total Indicated JORC Resource by 131% Ahead of PFS