Uranium rebounding due to political support and supply/demand metrics

The uranium market has just reached its inflection point and is moving up says Marin Katusa, a professional investor and founder of independent research firm, Katusa Research.

He is also the author of ‘The Cold War: How the Global Energy Trade Slipped from America’s Grasp’ in which he maintains that the western world has lost control of the energy market at a time when Russia is in the midst of a rapid economic and geopolitical renaissance. 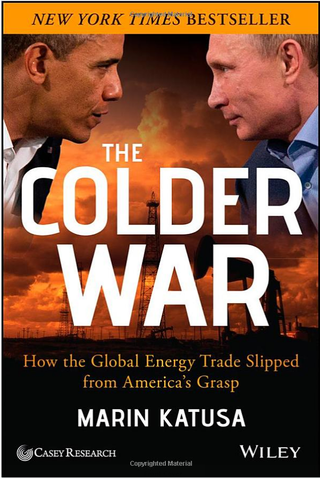 The inflection point referred to by Katusa is the same as with any commodity – it is a shift in the supply/demand equation.

What is driving supply and demand

In the case of an outperforming commodity it would be a sign that supply is increasing and/or demand is decreasing that would drive a retracement.

With regard to the poor performing uranium price as indicated below, it is the pending uptick in demand that is linked to a number of dynamics which in the case of this commodity are expected to occur in conjunction with a contraction in supply. 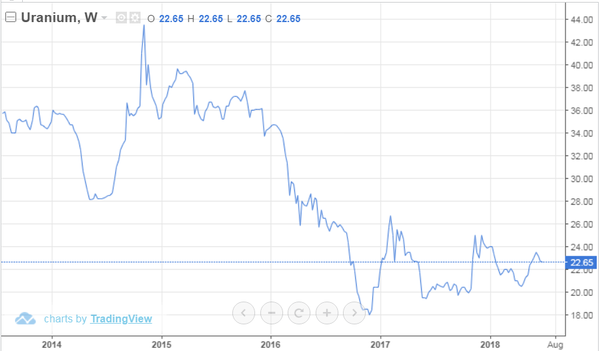 The latter has been caused by the closing of uneconomical mines and a lack of investment in new projects due to depressed prices.

Indeed, for many major countries in the western world it is crunch time as they are yet to renew uranium supply agreements expiring out from 2020.

With uranium being an essential commodity in delivering basic services and driving industry, there is no getting around the fact that supply needs to be secured.

Katusa Research noted that Dev Randhawa, CEO of Fission Uranium (TSX:FCU) and Fission 3.0 (TSXV:FUU), called uranium “the ultimate contrarian play” for investors and expects to see a “strong upturn for uranium at some point in 2018 driven by further supply disruption.”

Demand side of the equation appears bright

According to Randhawa, UxC (one of the nuclear industry’s leading consulting companies) estimates that 2017 uncovered uranium demand is 4.1 million pounds, with that amount expected to reach 54.9 million pounds uncovered for 2020.

Looking at the demand side, the post-2019 outlook appears bright as European and US utilities are forced to re-contract at the same time as China is ramping up its nuclear power generation capacity.

The anticipated deficit which is expected to emerge in 2020 and broaden substantially by 2024 can be seen below. 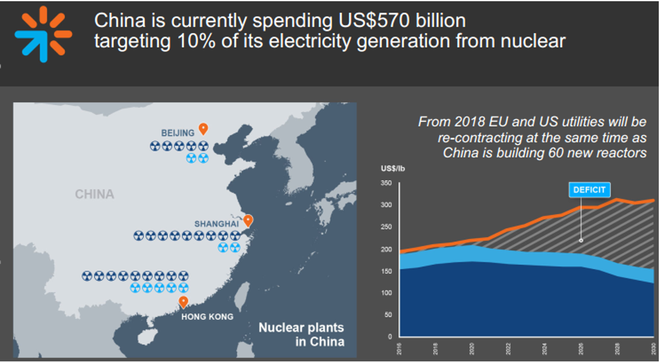 Critically, traditional sources of supply could fold overnight, and on this note it is worth examining the countries that the US has historically sourced uranium from. 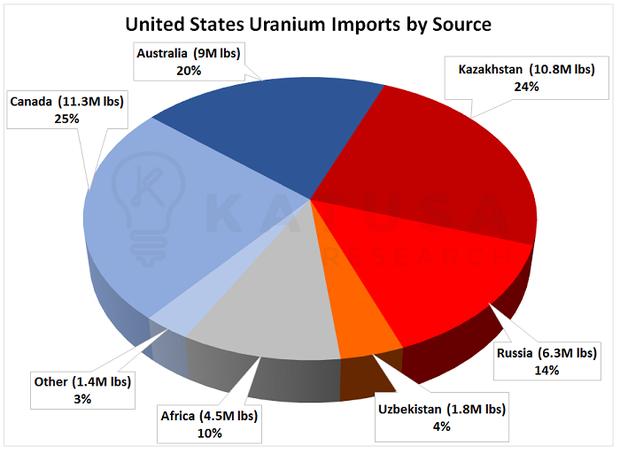 Could Trump turn his back on former Soviet Union suppliers

Consequently, in assessing the prospects of Australia’s existing and emerging uranium producers it is important to take into account the regions the US has been reliant on in the past.

As can be seen in Katusa Research’s chart, Russia and former Soviet Union countries such as Kazakhstan account for 42 per cent of supply.

President Trump could well take the stance that it is time to review the situation.

He has already demonstrated support for the use of uranium in various areas, in particular power generation.

However, Russia’s military might is growing, and President Vladimir Putin has demonstrated a propensity to shrug off international questioning of his alleged aggressive actions, in particular those relating to former Soviet countries and its support for the Syrian government, clearly in opposition to the US’s position in the region.

This could lead Trump to question whether the likes of Kazakhstan, and indeed Russia, could remain a reliable source of supply.

While they say every picture tells a story, changing horses in midstream would see more of a likelihood that mustering support for a collaborative agreement on the issue of uranium. 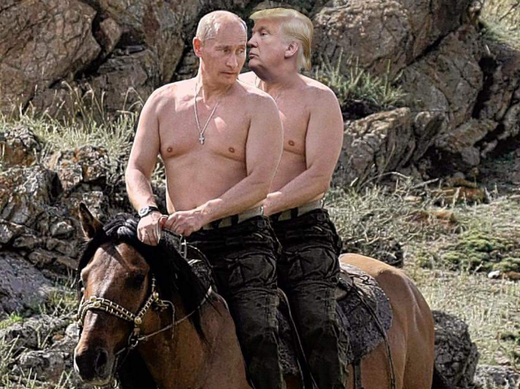 Setting aside security concerns, Trump has actively looked to reduce imports on many fronts with a view to boosting the economy through domestic production or manufacture.

This would seemingly support an uptick in production from operators in the US.

An opportunity for a military ally

However, uranium deposits are limited and the lead times involved in bringing projects into production are quite substantial.

This could work in favour of Australian producers as they would be viewed as reliable sources of supply with the government’s security policies and allegiances firmly aligned with the US.

While the latter is based in the US, it could be a beneficiary of support for production from local industry, and it is also worth noting that the company has producing assets.

Alligator Energy is an Australian-based explorer with highly prospective tenements in proximity to proven deposits.

It is an early stage play and investors should seek professional financial advice if considering this stock for their portfolio.

The company is focused on discovering world class high grade uranium deposits in the Alligator Rivers Uranium Province (ARUP) in the Northern Territory,

Adding to Alligator’s appeal is its proprietary technology which is giving it a valuable edge in terms of defining below surface uranium deposits. 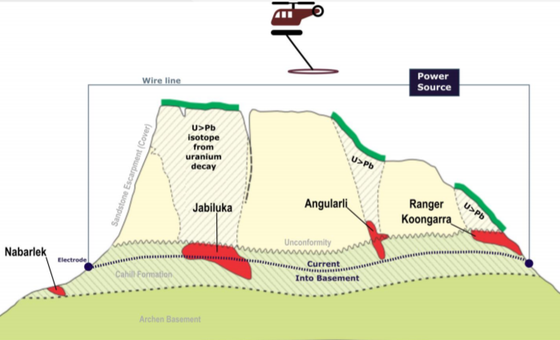 A province-scale zone of uranium mineralization, anomalism and pathfinder elements was defined in 2016 stretching 40 kilometres across the company’s Beatrice and Tin Camp Creek tenements.

Alligator currently has two active project areas covering in excess of 650 square kilometres in the ARUP.

These two project areas, Tin Camp Creek and Beatrice are now wholly owned by Alligator and contain above average grade uranium occurrences such as the Caramal Resource with 6.5 million pounds uranium.

Along with this, the projects include two of the most advanced and high quality uranium targets ready for immediate drill testing.

Potential to partner with a major

Alligator is working on attracting a significant partner into the project area containing the TCC4 (Tin Camp Creek) prospect to fund a drilling program and ultimately form a joint venture.

Management commenced discussions for this process during April 2018 through initial targeted briefings.

Also, a capital raising of circa $1.1 million in May attracted interest from key shareholders, investors and brokers.

This injection of capital will be used in part to fund drilling at TCC4.

A data room has been established containing all relevant information on the TCC4 prospect, whilst maintaining the confidentiality of the company’s proprietary exploration intellectual property which has been used to confirm the prospectivity of TCC4 and other prospects.

It is this technology which, if proven, could lead to the identification of further exploration targets and opportunities, enhancing the company’s landholding value in the ARUP.

The exploration data would also become a valuable asset in discussions with other ARUP landholders or potential investors.

Access agreements with the Northern Land Council on behalf of traditional owners are in place for all granted exploration licences.

As we said earlier, one of the key constraints with regard to transitioning from uranium exploration to production is the time required to complete studies, permitting and construction.

The company expects that it will be in a position to commence full production in two years, just as the uranium price is expected to hit its straps.

However, in the interim management is of the view that a quick restart program could see the project delivering 7 to 10 year average production of 880,000 pounds within nine months.

Of course this is speculative and investors should take all publicly available information into account before making an investment decision.

The following shows the extensive infrastructure already in place at Honeymoon. 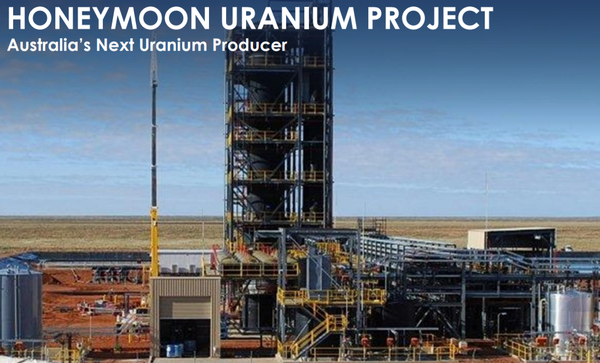 Boss is a good example of the undervalued nature of the sector, and for that matter individual stocks, particularly at the smaller end of the scale.

The company has a market capitalisation of $100 million, well below the value of the existing infrastructure.

Similarly, investors shouldn’t dismiss Alligator Resources purely because it is a microcap - like Boss, there is intrinsic value not recognised in its market capitalisation.

Numbers speak for themselves

The all in sustaining costs (AISC) of less than US$24 per pound indicates that the company is in the lowest operating cost quartile globally. 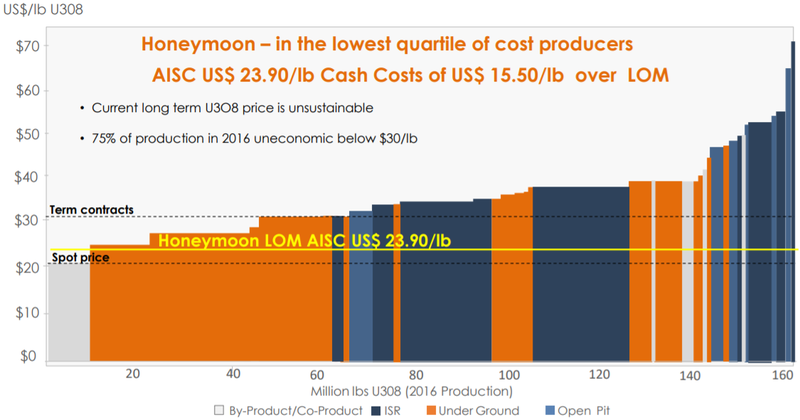 This indicates that the company has the potential to be one of the first mines to come into production from an economical standpoint as the uranium price recovers.

Peninsula Energy (ASX:PEN) is another stock worth considering, particularly given that it is an established producer with a substantial mine life and the prospect of significantly reducing production costs.

Based in the US, the company produced 43,638 of uranium from its Wyoming Lance Project during the three months to March 31, 2018.

The company has indicated that June quarter production levels should exceed the upper band of its 30,000 to 40,000 pounds.

Realised cash price of US$50 per pound

Of these deliveries, 92,934 pounds of uranium was from material sourced entirely from the Lance projects and 40,000 pounds was purchased from the market.

Furthermore, forward sales agreements with a weighted price of more than US$50 per pound extend to 2030.

Forward sales to generate US$340 million

Peninsula has forward sales contracts for 6.6 million pounds of uranium at a price point of about US$52 per pound through to 2030.

These are substantially higher prices to the prevailing spot or long-term price, and management is forecasting that they will generate sales revenue of US$340 million.

The uranium under contract is for delivery to major utilities located in the US and Europe, representing reliable end markets.

These contracts generate substantial earnings while allowing the company to retain significant quantities of planned uranium production for contracting during future periods.

In the current low-price environment, Peninsula has contracted to purchase 900,000 pounds of uranium over the next three years at an average cost of US$25 per pound.

Consequently, as an established player with steady-state production, even in the low-price environment, Peninsula is still in a position to generate substantial cash.

However, management recently cited the potential for the US government to provide price support as political activity involving nuclear fuel trade increases.

Section 232 of the US Trade Expansion Act

In particular, the company referred to section 232 of the US Trade Expansion Act Petition, indicating that it expected the US Department of Commerce to take up an investigation into potential remedies.

The intended purpose of section 232 of the Trade Expansion Act of 1962 is to protect the essential national security industries whose survival is threatened by imports.

In pursuit of these outcomes, the industry is calling for import quotas, the imposition of import tariffs, as well as a ‘buy American’ policy for US government agencies.

All of these initiatives appear to be in accord with policies and actions already undertaken by the Trump administration as it has aimed to boost the economy and generate employment opportunities.