Upgrades for Helloworld ahead of another strong year in 2017

Shares in travel distribution group, Helloworld (ASX: HLO) soared 25% from $4.00 to hit an all-time high of $4.95 after the company delivered a better than expected result for fiscal 2016.

The underlying earnings before interest, tax, depreciation and amortisation (EBITDA) of $32 million represented year-on-year growth of 17%. Furthermore, it was 19% ahead of the expectations of Belinda Moore from Morgans CIMB.

Most brokers increased earnings forecasts and price targets in response to the result with the latter close to the company’s current trading range following a retracement to $4.50. 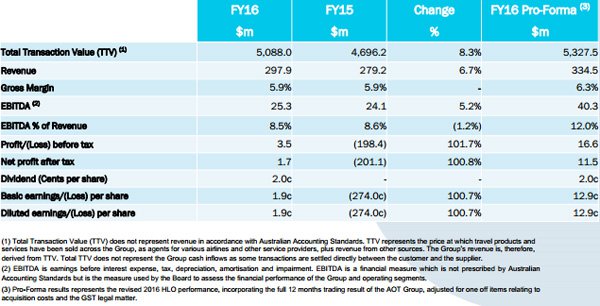 However, in what could signal further forward momentum for the company’s share price, John O’Shea from Bell Potter ran the ruler across the stock today, increasing earnings per share forecasts for fiscal years 2017 and 2018 by 7% and 1% respectively and upgrading the price target from $4.60 to $5.00.

He referred to a number of factors that point to a strong fiscal 2017 performance including annualised synergy and cost savings of $17.1 million, a stabilisation in agent numbers within the retail network and the significant growth that can be generated from the merger with AOT which was completed in February. O’Shea also expects improvement in revenue margins to be an important feature of future results.

The group received a further boost in mid-September after signing a deal with New Zealand based World Travellers to join the HLO retail network in New Zealand effective from October 2016. O’Shea also expects improvement in revenue margins to be an important feature of future results.

These results are yet to be determined so if considering HLO for your portfolio, you should take into account all information about the company and seek professional financial advice.

HLO is Australia’s largest network of franchised travel agents with a strong portfolio of brands including Qantas Holidays, Go Holidays (New Zealand), AOT Inbound, ATS Pacific and Sunlover Holidays. The group has over 2000 staff located in Australia and New Zealand, as well as other large regions such as Southeast Asia, Europe, the UK and the US. 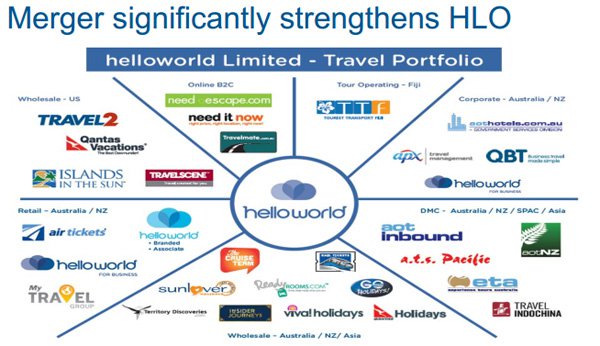 HLO has been one of the few players in the travel sector to deliver consistent share price accretion over the last 12 months. Shares in Flight Centre plunged from a high of $45.37 in March 2016 to a low of $29.38 towards the end of June.

Mantra Group went from market darling early in the year with its share price hitting an all-time high of $5.26 to trade as low as $2.87 at the end of August.

Management appears confident regarding the coming 12 months and provided a positive outlook statement when delivering the full-year result.

In stating that the outlook for HLO was ‘very good’, management said, “The fundamentals of the business are sound and we see continued demand in our retail, wholesale/inbound and corporate divisions”.

References were made to some of the key issues highlighted by O’Shea with positive commentary regarding margins, cost controls and improved brand strategies.

Commenting on the broader macro outlook, management said, “Travel continues to be both a necessity and a pursuit for just about everyone and the demand for our services in the retail, wholesale, inbound and corporate segments continues to grow”.

The company intends to refine its offerings and align a new digital platform with its traditional bricks and mortar businesses which it expects will result in demand for the group’s traditional fundamental value proposition.

O’Shea’s numbers reflect an outperformance with forecast EBITDA of $52.9 million, representing a net profit of $23.9 million, implying earnings per share of 21.3 cents. This represents a PE multiple of 21 relative to Wednesday’s closing price of $4.50.

This is slightly above the industry group average of 18, but most of HLO’s peers aren’t expected to generate the same level of growth over the next three years.