The last five months has been a period of transition for emerging Sulphate of Potash (SOP) producer, Agrimin (ASX:AMN). To provide some background, SOP is a specialty fertiliser with excellent market fundamentals and limited options for global supply growth.

As such, AMN is leveraged to increasing global food demand and the challenge of achieving food security. The Mackay SOP project is the world’s largest undeveloped salt lake SOP deposit and comparable to major SOP producing salt lakes.

As AMN confirmed positive geotechnical results regarding its Mackay project located in Western Australia, the company’s shares surged 25% from 13 cents to 16 cents.

The share price kick following the return of geotechnical results proved to be just the start of a much more significant rally as the company hit an all-time high of 57 cents. The 250% share price increase was supported by a number of promising developments, culminating in the completion of a scoping study in late August.

This underlined some compelling financial data surrounding the project, prompting management to progress to a pre-feasibility study.

It was also the catalyst for Julian Lake from Euroz Securities to initiate coverage of the stock and he has a speculative buy recommendation on the company with a price target of $1.00 per share, representing a premium of approximately 100% to Friday’s closing price of 49 cents.

It should be noted that previous trading patterns are not an indication of future share price movements, and as such shouldn’t be used as a basis for investment. Also, broker projections may not be met and investors should seek independent investment advice in relation to any of the companies mentioned in this article.

Lake’s price target appears conservative if anything given that it implies an enterprise value to EBITDA value of approximately one. As a means of comparison, the global EV/EBITDA ratio relative to fiscal 2018 projections in the agricultural inputs sector is 8.6.

The average EV/EBITDA ratio for ASX listed stocks Nufarm, Elders and RuralCo Holdings is 7.5. Looking at a closer comparison in Avenira (ASX: AEV), which is yet to come into production, its EV/EBITDA is 4.7 based on the projections of Mark Fichera from Foster Stockbroking.

While Avenira will come into production earlier than AMN, Friday’s closing price of 49 cents implies an enterprise value of circa $64 million with the company having net cash of $3 million. This represents an EV/EBITDA ratio of circa 0.5, implying a discount of nearly 90% compared with Avenira.

Consequently, a share price at least in line with Lake’s target seems appropriate with the potential for upside as milestones are met and the project is derisked.

Again past performance is no indication of future performance and professional advice should be sought if considering AMN for your portfolio.

The prospective timeline for these events is outlined below. 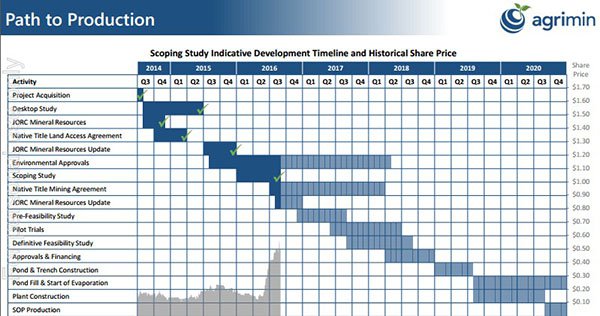