Volatility is a very important factor in expressing a view on the market and placing a trade writes Mike Cornips, Director at options trading educator TradersCircle.

When volatility is quoted on a stock or Index, it generally is quoted on the basis that the strike price being referenced is an at-the-money option.

It is important to realize that depending on whether the strike price is lower than the current price or whether it is higher, the volatilities quoted by the market makers will be different than an at-the-money option for the same stock.

Below is a chart of volatilities for a September maturity across the range of strike prices for CBA, CSL, BHP, and the XJO Index. 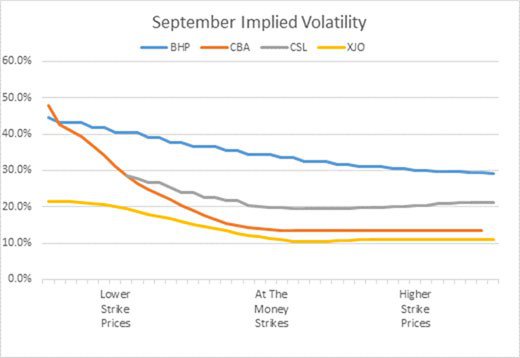 The option pricing model presumes that price rise movements are equally probable to price falls, in occurrence and magnitude. Practical experience though, combined with the psychology of trading, would suggest the large price falls occur more often than large price rises. So rather than an even distribution of price movements, the results are skewed on the downside. The price that is paid for this aspect of the market is that volatilities are higher for lower strike prices.

Let us look at the data.

So a simple analysis of price moves shows that price movements +/- 100 points are evenly distributed, but large price movements are not. Statistically, lower strike price volatilities should be higher.

Let us look at an example of the difference in volatility makes on the value of the option.

A September 5475 Strike XJO Put is currently quoted at about 11.8% volatility.

A lower strike September 5200 Strike XJO Put is currently quoted at about 14.9% volatility, with a price of 16 points.

If we price this option at the same volatility as an at-the-money option (11.8%), the price is about 7 points, which is 9 points less.

Remember though, larger downside price moves do occur, meaning the larger premium you received is justified. With the possibility of large downward price moves, your trade management rules should be adhered too.