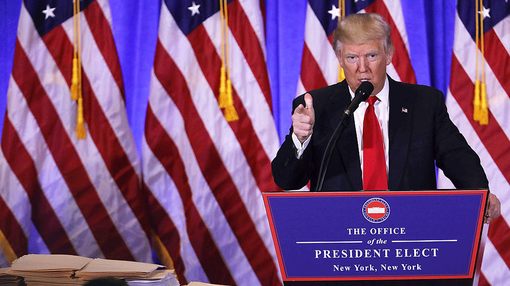 Trump trumps his own share market rally with his first speech after the election indicating that he will bring to account ‘murderous’ pharmaceutical enterprises sending the sector into freefall and immediately wiping more than 100 points off the DOW.

President-elect Donald Trump’s victory has undoubtedly been largely responsible for boosting global equity markets, but his first address following the election was far from confidence inspiring, prompting a sharp fall in the DOW and an equally substantial spike in the Volatility Index (VIX).

While his vendetta against so-called murderous pharmaceutical companies – you can watch it here – triggered a sharp downturn in US healthcare stocks, it may also be his credibility that takes a hit as he is taken to task on references to Nazi Germany like media misrepresentation at work in the US on one hand, while refusing to answer questions from media companies who he labelled as dishonest, arguably a very similar form of controlling information.

Also, taking aim at his own intelligence agency for allowing information to be released for public scrutiny may not be considered as the type of commentary expected from the President of the world’s most powerful country.

However, markets stabilised in the afternoon session, albeit not recovering to previous highs, and the DOW has finished up circa 0.5%. The FTSE 100 was up 0.2% with the DAX gaining 0.5% and the CAC 40.

Consequently, on the score of index movements, these slight gains are unlikely to be a key driver of Australian markets, particularly given they could be tarnished by Trump’s impact on the volatility index.

The impact for Australian markets

No doubt, the S&P/ASX 200 Healthcare index (XHJ) will receive a hit given that many Australian biotechs and pharmaceutical companies are leveraged to US markets.

On a more positive note, commodities could provide support with a recovery in crude oil prices and continued strengthening in the gold price generating positive sentiment in those sectors. However, one aspect worth noting was the relatively significant increase in the Australian dollar against the US dollar, up more than 1% from US$0.736 to US$0.744 as US markets drew to a close.

One of the most interesting commodity related developments was in the uranium space where the world’s largest uranium producer, Kazatomprom, announced yesterday that it would reduce planned uranium output in 2017 by 10%, representing approximately 3% of annual global output.

It has been reported that if this reduction were to remain in place for three years the supply/demand deficit would increase from next year onwards. Prior to this development many analysts were factoring in a relatively near-term recovery in the uranium price, so this is likely improve sentiment towards the sector.